The Legal Cut Is the Deepest 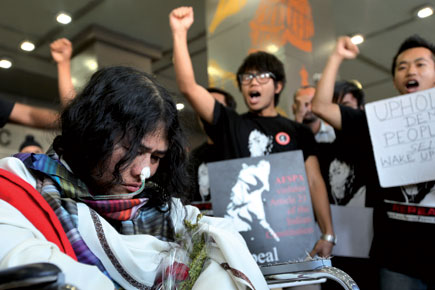 Philosophy today often does not need the professional philosopher. He remains a creature of textbooks and academic journals. Questions of terror, ethics, the fate of the body, the future of knowledge now gets debated in newspapers, scientific controversies, religious discourses, scientific judgments and even TV debates. Each of these contends with issues of life and death, good and evil in dramatic ways. The recent high court judgement on the Jain practice of Santhara is one illustration of it.

The High Court judgment delivered in Nikhil Soni vs Union of India is a fascinating document on how law becomes an act of bad philosophy. One sets out to examine the core of a text, a set of beliefs and rituals so that one can decide whether that text adheres to standards of justice. At the core of this exercise are three critical questions.

What is Santhara and is it essential to the Jain religion?

Does a right to life include a right to the dignity of death or is Santhara for all its theological ballast an act of suicide?

How does one look at a text across a multiplicity of cultures? What happens when translation as an act of equivalence does not quite serve the ends of Justice?

So what we have is a problem in religion blended with a problem in language to create a question about justice. Here text is crucial in order to understand its exegesis. But context becomes critical in helping us understand the nature of explanation.

India is a culture with a diversity of languages, beliefs and life systems, each of which a nation state often seeks to standardise by way of law, just as it tries to render education uniform so that citizenship can exist in a homogenous space. The rule of law is eventually an urge to universality and uniformity. Cultures resist standardisation. They appeal to diversity and dialects. They construct the rules of the body and the grammar of nature in different ways, so that a cosmos as a world view has varied interpretations, even different life chances.

The body becomes central to the interpretation. In Jain theology, the body is a temporary site. It can always be abandoned with dignity. Jain cosmology visualises the cycles of rebirth; between time and definitions of the body, the notion of death changes. Death is not closure or termination. Rather, death is a passage from birth to rebirth as the Jain traverses a cosmic travelogue. Once one sees death in cosmic continuity, the idea of suicide seems remote. The idea of Santhara allows the believer to abandon his body in times of old age, catastrophe, or famine or when a believer feels his stay on earth is complete. He abandons the body—he does not kill himself. Both belief and ritual point to a different interpretation of the act.

Santhara is a religious act, a sequence of rituals in tune with cosmic and ethical rhythms. It is done in consultation with a guru and follows strictly specified procedures. Santhara thus is neither an egoistic act nor an isolated one. Its ritualistic sequence involves the community as an ethical chorus. Unlike suicide, it carries no mark of stigma.

The court ruling is both an interpretation of text and an attempt to place Santhara within wider debates about Sati, euthanasia and suicide.

There is an ethnocentrism here we have to look at. Suicide in the West is either seen as a romantic, individualistic act, or associated with the grimness of criminality. Émile Durkheim’s classic study on suicide did add a new dimension to it, as he showed how society constructs suicide. Yet the folk idea of suicide as normless and egoistic persists and marks even the idea of law.

The court embarks on a comparative study of Santhara, locating it relative to Sati and euthanasia, especially after the debates around Aruna Shanbaug. Should assisted suicide be permissible? Oddly the court does not touch two incidents which could have pluralised the entire discourse. It did not mention the case of Irom Sharmila and the spate of agricultural suicides rampant in India over the past decade.

Consider Sharmila first. A Manipuri woman who refused to take food for over a decade now is being force-fed by the state. Irom Sharmila believes life under the Armed Forces Special Powers Act (AFSPA) is not worth living. It is ‘death in life’ and her refusal to take food is an affirmation of life and living; a way of publicising Manipur’s ‘death in life’ situation which gives dignity to neither life nor death. In fact, I remember asking Sharmila during an interview a few years ago what she would do if the AFSPA is lifted. She answered, “Fall in love, get married and be a woman.” Her affirmation of life and living has an ironic aftertaste as she is released every year and re-arrested for what the nation state calls an act of suicide.

As I was writing this essay, I received a call from Mahesh Bhatt, the filmmaker. He talked about his guru and friend UG Krishnamurti. Bhatt spoke simply and sincerely about how UG decided he didn’t wish to live any longer. Bhatt kept him company through the last few weeks and said, “It was one of the most beautiful things. I saw his dignity was literally poetry. I wish people who stuff old age with support systems knew more about this remarkable life.” He added that dignity of exit is a part of life. It goes beyond rights to the very way we look at living. The dualism of death and life and the reductive attitude to it where all decisions to exit life are reduced to the criminality of suicide does not exist in all cultures. Law, said Bhatt, needs to reflect more on such questions. Law which behaves like an English school principal may actually vitiate a sense of justice.

But the court has a selective, narrower frame for discussing such issues. Still caught in the hangover of colonial law, it conducts an elaborate discussion of Sati to show that it was a coercive act, amounting to murder. Women often did not have a choice to live once their husbands died.

One wishes the court were more analytic here in its deliberations. It has intuitively differentiated between belief and ritual as associated with religion and the ethnography of everyday practice. It asks, ‘Has Santhara declined from a ritual to a materialistic practice where the old are disposed of as a solution to property disputes? Or has Santhara become coercive as families see in it an investment?’ Many families do not let the devotee change his mind and instead drown his voice of protest in the noise of kirtans and bhajans. Religiosity then becomes suspect as materialism takes over. The families of the Santhara individual are honoured. They obtain a change in status. Santhara as an avenue for upward mobility vitiates the very spirit of religion and altruism. Choice and dignity, an ethical framework of ritual integrity with conversations and advice from a guru are all crucial for the integrity of Santhara.

The Indian state, in responding to it, has to decide whether the state should intervene at all in such a practice, and secondly, what the nature of its intervention should be. The court decides to ask if Santhara is an essential part of the Jain religion. Does the right to life encompass the right to a dignified death? Also, if Santhara falls within the definition of the Anglo Saxon law, should it be criminalised?

In Nikhil Soni vs Union of India, the court ruled that Santhara is not an essential practice without stating its rules of exegesis. There is a touch of glibness here as the nation state decides to be patriarchal, arrogating to itself what constitutes the essentiality of a textual discourse. The state’s idea of equality and justice virtually dismisses any idea of a religious interpretation of Santhara. It holds that we see in any of the scriptures, preachings or practices that ‘Santhara is not essential for moksha or the pursuit of immortality.’ Worse, the court hides its orientalist biases and Anglo Saxon tenets under a secularism which while paying lip service to religion fails to see the link between belief, ritual and practice. Fasting acquires a uniformity of definition which violates the wisdom of anthropology. An essential practice in religion is read as mechanically as the definition of the essential service and maintenance act. Analytically and philosophically, the judgment disappoints because it is ethnocentric and becomes a failure of exegesis. A language, instead of liberating rights and serving justice, corsets law to create a procrustean justice. The conversation between law and religion over justice is pre- emptory here. The judgment sounds more like the edict of a prison warden than an exegesis on law and the possibilities of plurality. Since Santhara is defined as not essential to Jain law, the practice becomes easy to criminalise. A word and world is disembedded from a cosmos and deemed a criminal activity.

I realise that courts today have to compete with religions to interpret and adjudicate on issues of life and death. This encounter has become one of the great philosophical sites of the 21st century. Translation becomes critical and language becomes essential to a philosophical understanding of beliefs. The court shows no sensitivity to such dynamics. As a result, what it creates is an idea of citizenship which is uniform rather than the costume ball of diversity and plurality such an encounter would have promised. One sees an effort to discipline and punish without the complementary effort to interpret and understand law. Without a sense of the exegesis of culture, the judgment seems woefully incomplete. Secularism often becomes a self-inflected injury in the pursuit of a justice that confuses uniformity with universality.