Should Test status set the rules for One Day cricket? 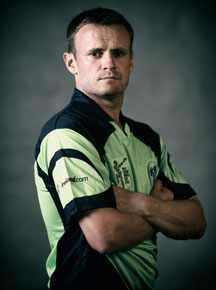 By the time the West Indies had finished batting first in their opening match, and the tournament’s fifth, of the World Cup on 16 February, the 300-plus target they set for the opposition appeared unexceptional. The teams batting first in the previous four matches had set similar 300- plus targets. But when Ireland bettered it that day, they did something the previous four teams batting second could not. And yet, Ireland refused to play along with the obvious cheer about the underdog’s triumph. It was not, they said, an ‘upset’; they were at the World Cup not to make the numbers, but to aim for victory in each and every match.

After all, Ireland came to that match in Nelson, New Zealand, with two successful 300-plus run chases in World Cup ties behind them, one more than any other team, having sealed Pakistan’s exit in 2007 and thrashed England in 2011. At Nelson, they made it three. Some sport cricket is, if its ‘minnows’ consistently set the standard on what’s achievable!

Perhaps our exuberant embrace of the ‘upset’ pulled off by Ireland was a cover for the cricket world’s denial about the fading of the West Indies, cricket’s most special territory—for the cricket it has given us and for the anti-imperial narrative it provided to sustain the sport’s claim to moral superiority. (Why, even the fact of a ‘West Indies’ team is a sign of cricket’s exceptionalism, for here is a collective of Caribbean countries that exists not politically, but only for cricket and no other sport.)

By the time you read this, the details of the Nelson encounter may be forgotten in the endless succession of group matches, designed to be endless so that a genuine upset does not pack India home, and with it India’s spectacularly partisan TV audiences and the advertising revenue that trails their whims. Therefore the recap, because Nelson must resonate with the gauntlet Ireland skipper William Porterfield threw down. Breaking from the anodyne comments that are routine at post-match chatter, he opened an argument against the clubby manner in which cricket is organised. “Cricket seems to be the only sport in which labels like ‘associate’ are used, rather than just having a straightforward ranking system,” he said.

International cricket is currently the preserve of Test- playing nations, and the reorganisation of the ICC is tilting even this tiny club towards the Big Three: India, England and Australia. The calendar this arrangement yields has very little space for emerging teams to assert themselves. So Porterfield’s complaint: “It would be nice to have more fixtures like this outside of the four-year World Cup cycle.” He noted that Ireland had got just nine One-Day Internationals against the top eight teams in the four years between this World Cup and the previous one.

The next World Cup will close the door slightly on ‘minnows’, making those ‘associate’ versus ‘full member’ distinctions even more relevant. The number of teams in the fray will be cut from the current 14 to 10. The eight top teams in the ICC rankings will be joined by the top two from a qualifying tournament. It’s immaterial to the larger implication of this pruning that Ireland and Afghanistan can qualify based on ICC rankings too.

International cricket has always been clubby. Test status separates the top tier from the rest, with these teams in rigorous contest with one another in every format of the sport. There was a time that Test status assisted cricket’s evolution, neatly telescoped in CLR James’s golden words, “What do they know of cricket who only cricket know?” India, for instance, got Test status and thereby equivalence with England on the cricket field long before Independence. West Indies’ Test status did more than chip away at the imperial order, it brought diverse territories in the Caribbean together in a manner that mocked the narrow nationalism of most team sports.

But now that imperial context is past. Equally, the progression of formats by which cricketers would announce themselves has changed. Leaving aside the debate and anxiety about Test cricket’s survival, should the ability to compete in the five-day game really determine an emerging team’s opportunities in cricket’s abbreviated formats? Ireland have posed the question, and cricket’s powerful men must not be allowed to shrug it away.