The top five Hindi films of all time, and the secret of why some films endure and others just fade away 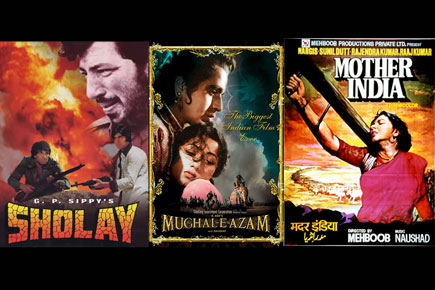 The top five Hindi films of all time, and the secret of why some films endure and others just fade away


Picture This, a weekly film show that I script and host on NDTV, completed its 200th episode last week.  We celebrated it by running a list of the best Hindi films ever made.  The process was exciting, exhausting and superbly entertaining.  I re-visited the classics and discovered why some endure and others collapse.  Here is my top five.

1. K Asif’s Mughal-E-Azam (1960): the romance between the prince and the dancing girl is the best Hindi film ever made.  With its powerful performances, thunderous father-son drama and spectacular song and dance sequences, Mughal-e-Azam is the apotheosis of the Hindi film form.  The making of the film was as dramatic as the film itself.  Mughal-e-Azam took 15 years and Rs 1.5 crore to make.  The lead actor Chandramohan died after ten reels were shot and the film had to be restarted.  Tailors were brought in from Delhi to stitch the elaborate costumes, and legendary classical singer Ustad Bade Ghulam Ali Khan was paid a staggering Rs 25, 000.

Fact: Shah Rukh Khan’s father Meer Taj Mohammad came to the sets of the film, hoping to get a role, but was told to stand in the line for extras.  He left and never returned.

2. Mehboob Khan’s Mother India (1957): this epic story of a mother who sacrifices everything to raise her two sons, only to eventually shoot one of them, has given Hindi cinema some of its most enduring themes: the iconic mother figure, the rebel son she has a soft corner for, the importance of societal good over individual gain.  Every Hindi film mother since then, from Nirupa Roy in Deewar to Rakhee in Ram Lakhan, has echoed Radha of Mother India.  Incredibly, Nargis was only 28 when she played the role, ageing onscreen from a nervous young bride to a weathered, white-haired woman.

Fact: Mother India was the first Indian film to be nominated for a foreign film Oscar. It lost to Federico Fellini’s Nights of Cabiria by one vote.

3. Ramesh Sippy’s Sholay (1975):  Shekhar Kapur said of Sholay, “There has never been a more defining film on the Indian screen. Indian film history can be divided into Sholay BC and Sholay AD.”  Indeed, for a certain generation, which includes me, Hindi cinema starts with Sholay.  The characters—Veeru, Jai, Basanti, Gabbar Singh, the minor players like Soorma Bhopali and Sambha, even the horse Dhanno—are the stuff of legend.  And Sholay’s dialogue is part of our colloquial language: Kitne aadmi thhe?  Jo darr gaya, samjho marr gaya.  Hum Angrezon ke zamane ke jailor hain.

Fact: when it released, Sholay was dubbed ‘Chholey’ and considered a flop. Critics called it a dead ember. Ramesh Sippy even considered re-shooting the end and allowing Amitabh Bachchan’s character Jai to live. By the third week, though, the audience was repeating the dialogue with the characters in the hall.

4. Guru Dutt’s Pyaasa (1957): Pyaasa is that rare thing—a film that engages and entertains but also haunts you with its poetry and tragedy.  The story of a penniless poet who finds fame after he is thought to be dead but abandons it for anonymity is especially relevant in our consumerist, corrupt, celebrity-crazy culture.   Sahir Ludhianvi’s brilliant poetry hits home even harder today.

Fact: Gulabo, Pyaasa’s golden-hearted prostitute, was based on a real-life character.  Writer Abrar Alvi said that he met her in Mumbai’s red-light district and managed to get her to tell him her life story.  She later thanked him for treating her with respect.

5. Raj Kapoor’s Awara (1951): Awara is arguably Hindi cinema’s first international hit.  The story of a petty criminal whose only redemption is his relationship with an upright, upper-class girl, was a blockbuster in the USSR and China. Awara explores the nature-versus-nurture debate with grand emotions and baroque imagery.  The nine-minute dream sequence, in which Raju is torn between his criminal existence and salvation, represented by Rita, is a watershed in Hindi cinema.

Fact: Awara featured five Kapoors: Prithviraj, Raj, Shashi as the young Raju, Randhir as the child with the dog in the opening credits and Prithviraj’s father Bisheshar Nath as a judge.