The Difficulty of Walking Away

Would it be an act of insanity not to? I really can’t tell 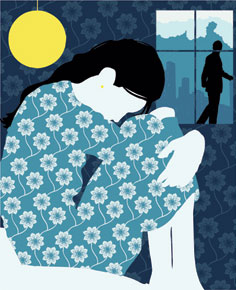 Would it be an act of insanity not to? I really can’t tell


I received many emails for my last column. It was touching to get the support of people who don’t even know my last name. It’s also disturbing that many women seem to have gone through a somewhat similar experience. But one regular reader, N, was highly affronted. ‘Seriously? Email being hacked? When did you turn into a whiny adolescent?’ he demanded. N’s criticism was just what I needed. Without it, I’d have probably sulked some more, refusing to write. Yes, very much like a teenager. So this column is dedicated to N.

Last week, I hit rock bottom. I was out with friends when I had a moment of inexplicable panic. Thanks to the details in those emails, my relationship with my sister is severely strained and I didn’t know where The Dude and I were headed. Right then, being directionless was more than I could handle; and so, in my panic, I reached out to two people. Asking for help doesn’t come easily to me—perhaps because of my impatience with everyone’s favourite four words: ‘I told you so.’ The beauty and curse of youth is that it makes you believe you’re indestructible. I’m no different. I have a reckless streak that often lands me in I-told-you-so scenarios. I don’t like hearing those words, so I give very few people the right to utter them. But that night, I didn’t feel indestructible. The Dude was one of the two I reached out to. He wasn’t there. He chose not to be there. ‘Choice’: it’s just another word in the grand scheme of things but powerful enough to destroy relationships.

Like all other moments of ecstatic happiness and gut- wrenching pain, that moment passed too. Weirdly enough, it was devoid of drama. Time didn’t stop or do anything strange. I picked up my car keys and drove into the night. I drove till my legs quivered and arms ached. In five hours, I stopped twice to throw up; but other than that, I drove like my life depended on it. For the second time that night, I was directionless. But this time, it wasn’t so scary. As I drove, for the first time, I saw my relationship how others say they see it: a woman madly in love and a man incapable of feeling the same way. I won’t say he doesn’t love me; that would be unfair and untrue. He loves me the best he can, I’m just not sure that’s the way I need to be loved. The way I think I deserve to be loved.

Knowing what you deserve. It’s such a simple concept, and yet, most of us get it wrong. All around, I see women accepting far less than they should get of a relationship. I know intelligent women hankering after married men who string them along. I know women who want marriage and babies wait for years without an ‘I do’ in sight. Everyone other than them knows there will neither be a divorce nor an ‘I do’, but these women wait. I’ve always wondered why they can’t or won’t walk away. Maybe it’s karma just doing its thing to level the playing field; because today, I don’t feel all that different from these women I always thought I was slightly better than. Even so, for one whole day, I managed to feel slightly superior because no matter how much it hurt, I had managed to make the decision to walk away. I had hit rock bottom and somehow survived.

I held on to the feeling until The Dude announced he was going to fight for us. He says that after everything we’ve been through, he’s not going to let me walk out of his life because he fucked up one night. His conviction makes me want to go running back to him… Because this is the person I know and fell in love with; not the one who turned his back on me. I always knew that being in a relationship with a man like him was going to be difficult; I just never expected to feel like an outsider looking in. Was I always an outsider and I’ve just realised it? Or is this one of those times when you have to trust the reasons you’re together more than the forces that tear you apart?

A part of me wonders if there’s hope for a second chance. Another can’t forget how utterly alone I was that night. A third guiltily remembers all the times I’ve walked out on him without giving him the benefit of doubt. And a fourth teeters between wanting to slam the door on this relationship and bolting it for good measure, and leaving it slightly ajar for love to work its magic. When it comes to difficult relationships, how can you ever, ever, tell a moment that requires a leap of faith from one that deems you certifiably insane for believing?