What I am still learning about men 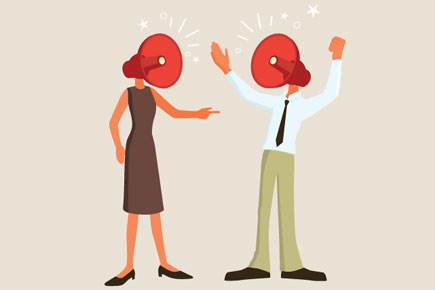 What I am still learning about men


A few days ago, The Boyfriend and I had our first big fight. It was almost a relief. I’d started to wonder if I was dating an alien life form or an unheard-of genetic mutation at the very least, considering the vast reserves of patience this man seems to have at his disposal. Every eccentricity of mine, and I know there are plenty, is met with a goofy grin and infuriating logic. The efficiency of our relationship was driving me crazy. I needed a fight. A good old screaming match, the kind that ends in slammed doors and impatient makeup sex. I needed to ruffle those feathers. It wasn’t easy, I’ll have to admit. ‘He’s stubborn, this one,’ I found myself thinking on more than one occasion, ‘Nothing seems to faze him.’

He loves food and I have a strictly functional relationship with all things edible. He loves cooking and I feign interest in whatever he packs in my dabba on the mornings we wake up together. He loves music and I don’t even like it. He reads on the iPad, which can always be found in one of its three designated spots. I read multiple books at the same time and leave them lying about. He sleeps like the dead and I wake up at the slightest sound. He has a monogamous relationship with shoes, while I have two overstuffed cupboards dedicated to the pursuit of leather. He routinely has to move my stuff to get to his pyjamas in his cupboard. If I were him, I’d be throwing hissy fits. But not Mr Manifests-the-Patience-of-a-Saint.

But last week, I saw some real fire. It was well past midnight and we were returning from a friend’s party. It was my turn to drive, and about halfway home, he asked me to pull over. I gladly obliged, pleased that he couldn’t wait the 15 minutes it would take to get home and into bed. The moment I parked, he hopped out of the car, found a secluded corner of the road, and turned his back to the world in that age-old stance of a man threading the darkness with his piss. A few seconds later, he returned, hugely relieved and primed for a long make-out session.

Of all the things I’m anal about, the toilet seat isn’t one of them. When my women friends complain about men being insensitive brutes—“Why else don’t they put down the toilet seat?”—I only hope I can look sympathetic. Because, frankly, I don’t get it. Apart from hollering from the bedroom that it would be quieter if he did it sitting down when he lumbers off to pee in the middle of the night, I don’t really care how he chooses to conduct his business. But I’ll be damned if I knowingly let a man touch my face seconds after he’s taken a leak. Whether or not he puts the seat down in deference to my ample posterior, a man must wash. That’s non-negotiable.

All my emotions on the subject converged into a singular sound as he leaned in anticipation of a long welcome-home-honey kiss. “Ewww,” I said.

“What the fuck?” was his response.

I chose to pick that moment to lecture him on hygiene and sanitation. He listened to me in stony silence. When we reached home, he made a production of scrubbing his hands and towelling them dry. Needless to say, I didn’t get any that night.

Who would have thought? We’d breezed through the horror or action film debate without raising our voices. We’d discussed Modi versus Gandhi without losing our cool. We’d even survived the make-or-break argument in a reading couple’s life—Chetan Bhagat’s contribution to literature—without resorting to blows. But he’d gone from the Dalai Lama to the Incredible Hulk in defending a man’s freedom to pee standing up. The tap, shake or wave was not to be encumbered with considerations like wiping and washing. Almost as if it’s an inalienable right, an instinct so deeply embedded in his DNA that in its absence, a man is incapable of feeling like a Homo sapien. ‘Trust men to pick a penile function as their defining evolutionary milestone after millions of years of evolution,’ I thought. Since my brain-to-mouth filter goes AWOL with him around, the thought came tumbling out when he asked me to pass the dal that night. “Oh, there’s a lot more than that to being a man. You’re going to find out when one isn’t around.”

“Are you breaking up with me?” I asked incredulously.

Over the week, I found out exactly what he meant.