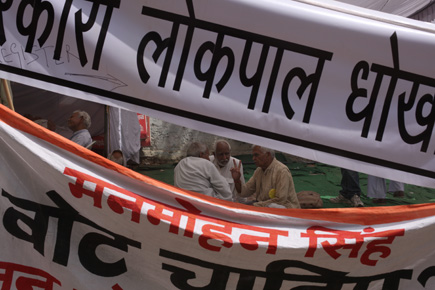 
If you happen to watch television news or read the newspapers, you may feel that the nation is on the brink of a revolution unleashed by an austere man in a white cap not many wear anymore. Anna Hazare, a former driver with the Indian Army who has the useful Indian talent for sitting cross-legged for long periods, is right now on a thin white mattress by a wayside in Delhi, having vowed to fast until death or until the Government agrees to set up a potent anti-corruption body made up of good people who would have power over all important arms of the Government.

His protest comes in the wake of a series of scams that are extraordinary even by Indian standards. Intoxicated by images on television of this man, who is not a politician, people in several towns have begun their own fasts. And the middleclass is wondering if this, finally, is their deserved revolution.

But there is much that is not evident on television. As this column goes to press on the second day of the fast, the number of people at his protest in Delhi is just around 300, including journalists. They are on a 50 metre stretch of a roadside that is between a public urinal and a wall.

Hazare, who is on a raised platform, has acquired many of the mannerisms of Mohandas Gandhi, including a thoughtful tilt of his head. Behind him are images of Gandhi and a very shapely Mother India.

People take turns to say things into a mike. One man says that the fact that Indian news channels were not allowed to carry footage of the cricket World Cup is further proof that foreign corporations are trying to control India. Poets have descended to read their poems, many of them impoverished. One of them sings, “You have planes and ships/We have no roads to walk on.” An announcer says, “In our fight against corruption, we specially thank the media for their support.” Everybody claps. Later, he requests the cameramen present not to fight among themselves.

One man comes up and screams, “We are not begging, we are asking for our right. Now raise your hands if you are not beggars.” Very few do. He looks unhappily at the crowd and says, “Lots of beggars here.”

Suddenly, a man appears undressed as Gandhi, holding a stick. Journalists flock to him, he denounces corruption and asks one newspaper reporter when his article will appear. Apparent activist, Swami Agnivesh, in saffron robes and turban, goes on stage. With Agnivesh dressed like Swami Vivekananda and Hazare pantomiming Gandhi, the scene resembles a college skit.

We must not underestimate what television can do to an absolute farce. A good example is the toppling of Saddam Hussein’s statue in Baghdad’s Firdos Square. The footage of the toppling of that statue by US Marines and Iraqi people became an iconic television moment in the American invasion of Iraq. Anchors used the images to announce America’s triumph and the jubilation of the Iraqi people at the victory. The truth was very different.

The toppling of the statue was an accidental and insignificant moment in the war. Peter Maass wrote in The New Yorker, ‘Primed for triumph, they [editors] were ready to latch onto a symbol of what they believed would be a joyous finale to the war.’

The timing of Hazare’s protest, Indian editors know, is dramatic. It is a season of extraordinary revelations. Even the Supreme Court was disgusted enough to ask, employing language that is rare in judicial prose, “What the hell is going on in this country?”.

Hazare, as a relic of Gandhi’s way of life, is in a unique position to capture the mood of the nation.

But what kind of man is he, really? Haima Deshpande, a senior political writer with Open, has met him several times. About 10 years ago, when he went on a fast to protest against corruption in the Maharashtra government, Deshpande covered the event. She was a bit surprised when he said that he wanted to end his fast because journalists from the English media were finding it hard to reach his village. He wanted to end it on a Sunday.

“Two reporters told him that since the Pune Cantonment elections were to be held on that Sunday there would be no space in the newspapers. So it was mutually agreed between the journalists and Anna that he would give up his fast on Monday at 1 pm.”

And that was what he did. Now, the media wants a revolution and there is a good chance that Hazare will not disappoint.