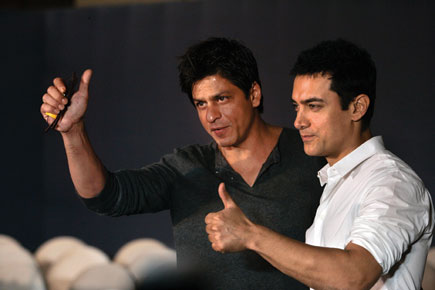 Aamir and Shah Rukh’s power isn’t limited to Bollywood. On India Today’s 2010 High and Mighty list, the two are the only industry names to feature in the all India top 10. According to the magazine, Aamir is the country’s fourth most influential man, just after Ratan Tata and the Ambani brothers, and Shah Rukh is the sixth. How many filmmakers feature on this list? None.

Actors rule Bollywood. Despite the entry of corporations and myriad advances in technology, craft and distribution, the film industry remains resolutely star-struck. The three Khans—Aamir, Shah Rukh and Salman—Akshay Kumar and Hrithik Roshan essentially function as one-man studios. Each one has a production company and a planetary system of favoured directors, producers, writers, publicists and stylists that revolve around him. These actors can raise funds, make a film and release it on their own accord. Which is not how it works in Hollywood.

DiCaprio, Brad Pitt, Tom Cruise and Angelina Jolie might be global superstars, but they are still subject to checks and balances. In Hollywood, studio heads and brand-name filmmakers wield equal if not more power than A-list actors. So in June last year, Sony head Amy Pascal shut down production of a Steven Soderbergh film starring Pitt five days before shooting since the script did not match studio requirements. In Bollywood, the opposite happens.

There is no dearth of financiers and producers for a project that has a star attached. Which explains why even deliriously vapid scripts like Main Aurr Mrs Khanna or Anjaana Anjaani eventually screen at your local multiplex.

Stars do make movies magical. But the level of clout they wield in Bollywood seems almost unhealthy. And sadly, corporate entities and studios have only helped to fortify this power. In pre-recession days, Shah Rukh said in a New York Times interview, a corporate was offering him a five-picture deal for Rs 500 crore, with full creative control. Today, the number of zeroes may have diminished, but the fact remains that too much money is chasing too little talent.

In Hollywood, technology has lowered the dependence on stars. The biggest star in Avatar was James Cameron. We don’t have the budgets to create Avatar, but perhaps one way to correct the skewed power equation is scripts. If a story soars high enough, it will find financiers and an audience. The best example: Slumdog Millionaire, which narrowly averted the dreaded fate of going straight to DVD and grossed about $378 million globally and won eight Oscars.

There are few Bollywood equivalents of Slumdog. Occasionally, a love story starring debutants hits the bullseye (think Jaane Tu… Ya Jaane Na or Kaho Na Pyaar Hai). Hindi independent cinema, or ‘Hindie’ cinema, creates commercial waves on a smaller scale—this year, we’ve had Love Sex Aur Dhokha, Udaan and Peepli Live (propelled as much by its crackling script as its producer Aamir Khan). But star-less films rarely make the blockbuster list. In the same interview, Shah Rukh asked, “Who gives us clout?” He answered the question himself, “It’s the last mile, the audience. My logic is this: can you beat me at the box office?” Bollywood’s power equations will only change when stories beat stars at the box office.