So Numb and Pretty Awkward 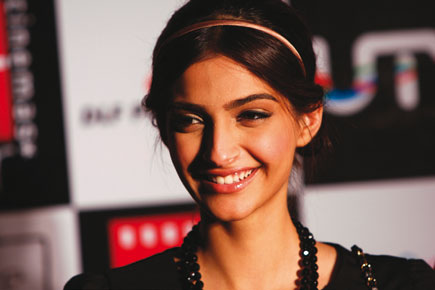 
Sonam Kapoor and Abhishek Bachchan aren’t what you can describe as ‘good friends’,  even though they’ve acted in a movie together. Unit hands who worked on Delhi 6 say the two actors barely communicated with each other, except during filming. Which is why it can’t be easy for them that they’ve been paired together again, and have in fact begun filming Abbas Mastan’s Players (a remake of The Italian Job) in Goa earlier this week.
They started with a song sequence on Monday, and eye-witnesses say the rapport was awkward. Hardly surprising, when you consider all the water under the bridge between them!

Sonam attacked Abhishek’s wife Aishwarya for allegedly sabotaging her visit to Cannes last year, claiming the senior actress and fellow L’oreal ambassador used her clout with the brand to get her invitation to the festival revoked. Aishwarya snapped back in the press that she’d done no such thing. The final blow came when Sonam referred to Aishwarya as “Auntie” in interviews, explaining innocently that since Ash had worked with her father Anil Kapoor, it was only polite that she refer to the “older star” with the respect she deserved.

But Sonam and Abhishek have had issues of their own too. The actress has been nursing a grudge against her co-star for hogging all the attention while they were travelling for promotions of Delhi 6 last year. Abhishek set a Guinness Book record by visiting the most number of cities during the course of a single day, to promote the film. Sonam was conveniently dropped from this particular record-breaking activity.

It’s not like Abhishek didn’t do his level best to avoid the awkwardness. Industry insiders say the actor urged the directors to cast any another actress opposite him, but after everyone from Katrina Kaif and Deepika Padukone to Kareena Kapoor and Priyanka Chopra had turned down the role, they were left with no choice but Sonam.

Aftab Shivdasani is looking a bit like a beached whale these days. The actor with the gummy smile used to sport a toned physique till recently, but those close to him say the failure of his career has led him to depression. He hasn’t hit the gym for months now, and much of the muscle has turned into fat. So conscious was he of this fact that he reportedly turned down a lucrative offer to participate in the last season of Khatron Ke Khiladi recently. The channel offered him Rs 20 lakh per episode initially, then hiked their offer to Rs 30 lakh, finally rounding it off at Rs 40 lakh, but Aftab firmly resisted. He was embarrassed about participating in a high-adrenalin, stunts-heavy television show while he was so out of shape. He’s believed to have confided in friends that he didn’t have the confidence he’d last even the first round, and felt no amount of money was worth humiliating himself publicly.

But an offer to be the face of a prominent international after-shave brand may have finally given the actor the encouragement he needed to hit the treadmill again. Aftab is committed to launching a masculine fragrance, and although the fee is only reasonable, he’s excited because of the exposure it’s likely to grant him. In return for the half-dozen or so hoardings of the ad-campaign featuring the star that will be put up across the country, Aftab has, apparently, been asked to make a shirtless entry at the brand’s launch party.

With no films whatsoever on the anvil, he has no excuse for staying away from the gym now!

The Bourbon and Dettol Chronicles

Big stars have odd quirks. A leading actress and former beauty queen demanded that her make-up van be stocked with several bottles of Dettol handwash, and half a dozen packets of Bourbon chocolate biscuits, before she arrived at a suburban studio for a magazine photo-shoot last week.

The married star, who has put on some weight recently, refused to allow stylists to hang around while she tried out the designer outfits laid out. Only her old friend and faithful make-up guru Mickey Contractor stayed inside while she slipped into the fancy togs, many of which she allegedly had difficulty squeezing into because of the inches she’s gained.

After a hectic shoot that lasted all afternoon, the actress changed back into her tracks and left for home. The Bourbon biscuits had been devoured, and the Dettol handwash bottles had vanished. That’s not all. A car she’d asked to be hired for her security staff wasn’t returned until the next morning.