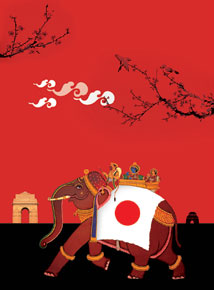 Except for its 1947 decision to leave the ungentlemanly intelligence business to the seedy back- room boys—who were not even allowed the title ‘Department’ for their central intelligence agency—the US State Department’s deepest regret is its long-revoked denial of a visitor visa to Narendra Modi. That is not just because of Modi’s ascent, but much more because Washington knows that he might transform the entire Asian balance of power. Normally, no individual could possibly do that—not even a Genghis Khan or Timur, if they too were as subject to all the checks and balances and limits of a parliamentary democracy as Modi would be.

But these only limit what a Prime Minister can do. They cannot stop a Prime Minister who can bring about vast change by simply letting the Balance of Power do its work. In essence, China has greatly overplayed its hand because of India’s passivity; a passivity more obvious in light of Japan’s first dynamic leader in decades, Prime Minister Shinzo Abe. If Modi does respond positively to Abe’s offer of broad ‘strategic’ cooperation (what is there to refuse?), that would be enough to allow the emergence of a much broader coalition that has been waiting to happen ever since 2009. That was the year that China’s leaders over-interpreted the West’s financial crisis as a sign that they had become all-powerful, and loudly started demanding territory; reefs, shoals, islands and 3 million sq km of plain ocean waters from India, Japan and Vietnam as well as Indonesia, the Philippines, Malaysia and the Sultanate of Brunei. In so doing, they greatly exceeded the limits of the Balance of Power, given that India, Japan and Vietnam alone between them have more people, more economic capacity and arguably more technology than China—even without adding Japan’s treaty ally across the Pacific.

The potential in a winning coalition of China’s seven threatened neighbours was obvious, but China’s leaders were emboldened by the dogged insularity and inert passivity of the Indian and Japanese governments, without whose joint leadership there could be no coalition, leaving the Vietnamese isolated and Indonesia, Malaysia and the Philippines much too weak to resist. Yes, there was a low-key increase in intelligence exchanges with Japan, and India did offer its submarine training establishment to Vietnam, but neither changed Beijing’s dismissive attitude. The Chinese too watched the Mumbai attack with fascinated attention, and then waited for India’s reprisal raid. When nothing happened, they saw not wise restraint at work but more passivity, which they felt free to test with border intrusions—in Ladakh as recently as last year.

Modi need not double defence spending nor start a war with Pakistan to respond to Abe’s offer and start building the winning coalition that might yet persuade the Chinese to go back to peaceful ways. What he does have to do is equip himself, as Abe has done, with a team of officials as dynamic as himself who can in turn energise both India’s defence establishment and its diplomacy. The world’s slowest procurement system has Indian pilots flying the same jet fighters that their grandfathers flew, and blandly accepts decade-long delays in delivery of indigenous systems. Given that Modi means to modernise the entire economy with deregulation and new infrastructure, it would be illogical if HAL were allowed to keep delivering antique Jaguars to India’s Air Force and retain its overall laxity. Equally obvious is that both the Research & Analysis Wing and Intelligence Bureau need new leadership to overcome paralysing bureaucratic factionalism, as well as larger budgets once there is more confidence that the money will be well spent.

India’s greater task, undoubtedly, would be to change its conduct of diplomacy. With Modi, it would face the formidable task of actually building a functioning coalition. For that, good intentions will not be enough. New Delhi, Hanoi, Jakarta, Manila and Tokyo would have to interact on a daily basis both to build the machinery of intelligence and military cooperation—everything from joint naval task-forces to some joint procurement (to arm the weaker members)—and to coordinate in minute detail every aspect of each country’s China policy. For example, when China abruptly announces a new demand, such as last year’s Air Defense Identification Zone, or engages in provocations such as its new passports decorated with a map that shows all of Beijing’s claims as Chinese territory, there should be identically-worded protests issued simultaneously by all five capitals instead of scattered complaints, which come across as feeble.

It will not be easy, of course—there would be much more to it than a five-sided editorial conference on the details of a draft agreement—but that is exactly how a functioning coalition is built, by forming joint positions issue by issue, by making coalition policy case by case. Now that ASEAN has lost all strategic relevance—because neither India nor Japan belong to it while China is present through its influence over one or more member-states—everything is set for Modi to join Abe in forging its much-needed replacement. The new coalition partners, moreover, could counteract China in significantly positive ways too; for example by sponsoring a Kolkata-Hanoi road and rail transport axis that would do much for the development of all concerned, including India’s now isolated Northeast. It would also serve the squarely strategic purpose of cutting across the north-south vectors of Chinese influence by drawing in Bangladesh, Myanmar and Laos.

It is obvious that India cannot emerge from its diplomatic inertia unless its diplomats are up to the task. Individually, they are usually very able; but they are simply too few of them, especially back home where grossly overburdened officials add their omissions to the perpetual lack of coordination that enfeebles India’s voice. Moreover, new circumstances require new practices.

Postings to Tokyo and Washington call for double and even triple tours for exceptionally successful ambassadors. This is because continuity yields precious advantages too important to be sacrificed just to give junior diplomats their turn. India’s diplomacy is severely understaffed, but a Modi government would have to do much more than merely adding officials while making sure that today’s high standards are preserved. It would take real foreign-policy leadership—that precious commodity which India has been lacking. As always, real leadership requires courage, which works via a self-reinforcing process: the leader who acts courageously today thereby gains the ability to do more tomorrow. Modi’s act of courage might be to elevate relations with Israel through a prime-ministerial visit; not so much to enhance relations already thriving across the board, but to affirm the independence of India’s foreign policy from any sectarian pressures. Just as no anti-Muslim sentiment should limit coalition-building with mostly-Muslim Indonesia, Indian Muslim sentiment should in no way condition India’s relations with Israel.

Courage of a different sort—but of much greater scope—will be needed by Modi to make an alliance with Japan work. That Japan is firmly bound to the United States by a security treaty, while India must preserve its Russian ties (also a favour to the US), is a problem easily solved; simply because it is a one-way alliance: the US is under a treaty obligation to defend Japan but has no reason at all to limit its dealings with India.

The much greater problem is that only a courageously drastic liberalisation of India’s economy—and a dramatic upgradation of its highways and electrical supply—could make India a fit partner to co-lead a coalition with Japan, partly by attracting much more foreign investment, especially from Japanese firms. While they belong to the most organised country on the planet, these firms are willing and able to operate in unorganised countries as well—they are strong in Latin America, for example. But India, now, is neither organised nor unorganised; rather, it is disorganised in a minutely regulated way that often frustrates the Japanese will to invest in the country. Modi’s most important promise is to squarely attack both ends of that problem by assuring key sectors of the economy of quick deregulation and better organisation.

That is also why Modi’s leadership is India’s best opportunity to achieve higher economic growth—without which there can be no escape from mass poverty, nor any possibility of catching up with China.

As for his particular interest in highway-building as a priority, what would be the point of providing a Hanoi-Kolkata motorway right across Bangladesh if the road would abruptly deteriorate as soon as it reached the Indian border?

Japan’s Prime Minister Abe was the guest of honour at this year’s Republic Day parade. Tokyo is now hoping and waiting for a visit by Modi— that would begin with all the usual ceremonies and then continue behind closed doors— as the first of many working sessions that may be expanded to bring in other coalition members. In the meantime, the Japanese Diet is preparing to change the country’s constitution to allow participation in ‘collective defense’, which may be read as the proposed coalition’s charter. As for the US government, it need not participate directly in this vast project; it can support coalition members individually.

That is important because even as they quarrel over Ukraine, both Russia and the United States can only welcome a new Asian coalition that would redress each country’s own imbalance with China. That is why the US has joined others around the world in hoping for a Modi victory and its promise of transformational leadership.