As Pope John Paul II is slotted for sainthood, some observations about miracles 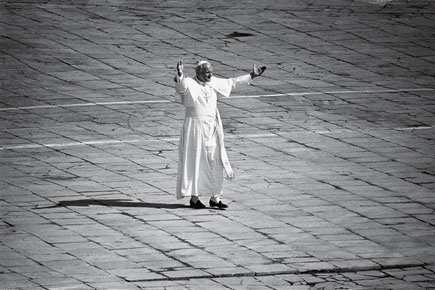 As Pope John Paul II is slotted for sainthood, some observations about miracles


It has been decided by the current Pope Francis that John Paul II, who was his predecessor from 1978 to 2005, is a saint. Usually, two miracles are needed for someone to get this distinction. A Costa Rican woman with brain damage had prayed to him to remedy her condition and he interceded on her behalf. Earlier, John Paul II had cured a nun of Parkinson’s disease after she appealed to his astral self. These miracles were performed by him after his death and that is not unusual. It is a condition of sainthood that one answers prayers.

It is, however, slightly strange that John Paul II himself suffered from Parkinson’s and the ailment progressed on its normal non-miraculous course. An ordinary man with such powers would be expected to cure himself, but let us swat aside that niggling thought with the belief that saints are far removed from self-interest. But why didn’t other saints intercede for him? John Paul II created more saints during his tenure than ever in the history of popehood. An Associated Press piece by Frances D’Emilio noted that in 1983 he wanted to make the church more popular and made radical changes to the process of canonisation. Terming him a champion saint-maker, the article noted, ‘By the end of his long papacy, in 2005, John Paul had recognised 480 saints. That compares to 302 saints who were made during all the papacies of the previous 500 years.’ You would have thought one of those 480 saints would have put in a word to God to cure his Parkinson’s, but, as we know, that didn’t happen.

There are also other mystifying things about the process. Starting with the question of what exactly is a miracle. The common sense answer is that it is something that cannot be explained using the laws of natural science. For example, it would be an unqualified miracle if someone jumped out of the window of a 20th floor in a high-rise building and instead of falling down, went up. Physics does not allow that for human beings. The present-day miracles of saints are however not like this. Let’s categorise a man flying as a physics-miracle; water turning into wine without any additions as a chemistry- miracle. But, for some reason, what we always hear about would be a category called medical-miracle, of people getting cured inexplicably. Among all miracles, medical miracles are the most suspect because the body can and does cure itself once in a while, even an atheist’s. But atheists would be foolish to stop taking medicines because of that. The test of science is predictability and repeatability. An aspirin will cure a headache most of the time and it will do so through manipulating a certain process inside the body.

It was a medical-miracle that got Mother Teresa her beatification. A woman in Kolkata named Monica Besra prayed to her to remove a painful abdominal tumour and was obliged. Except that she was also being treated using modern medicine and her doctors said there was nothing unusual about it. Monica was taken to Vatican City and shown off. After six or seven years, she again made headlines when she railed against the Missionaries of Charity. ‘Mother Teresa ‘miracle’ patient accuses nuns’, went a headline in The Telegraph, UK, in 2007. The article quoted Monica as saying, “They made a lot of promises to me and assured me of financial help for my livelihood and my children’s education. After that, they forgot me. I am living in penury. My husband is sick. My children have stopped going to school as I have no money. I have to work in the fields to feed my husband and five children.”

You have to understand the complete unfairness of her stand—because she was cured by Mother Teresa, she expects to be supported by her throughout her life. You also have to note one more thing, that she is not expecting a miracle any longer. There is none coming. Mother Teresa, John Paul II and all the sundry saints of every religion will usually only oblige one person once. Their miracles are only wilful delusions of the believer.