Sascha Sippy, the grandson of Sholay producer GP Sippy, re-released India’s greatest story ever retold in 3D. How come so few went to watch it? 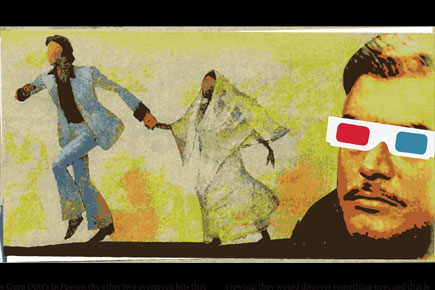 Sascha Sippy, the grandson of Sholay producer GP Sippy, re-released India’s greatest story ever retold in 3D. How come so few went to watch it?

Sascha Sippy runs a company called Sholay. The only product in its inventory was manufactured 25 years before the company was formed in 2000. That product is a film written by Salim Khan and Javed Akhtar and directed by Ramesh Sippy, all of whom are still alive. So how did Sascha, grandson of the late producer GP Sippy, and son of a lesser-known Sippy (Vijay) come to own Sholay? For the same reason some of us believe in destiny.

During the making of the film, when the cost of production was going out of control, director Ramesh apparently decided to surrender his financial stake in Sholay. He probably didn’t want to share the losses that seemed imminent. This was a view shared by several others when Sholay opened in theatres on 15 August 1975. Trade Guide, a popular box-office journal then, famously termed it ‘Chholay’ (chick peas)—referring to its likely return on investment.

Enough has been said about how they were all miraculously proven wrong, and Sholay became inarguably the most memorable Bollywood movie ever and arguably the biggest commercial success in Indian cinema, continually generating revenues from trademark and copyrights, television screenings over the years, VHS sales, later DVDs, and now video games and mobile apps. During my visits to two countries in the Eastern Hemisphere where you find few Indians—Egypt and Iran—locals have inevitably asked me about Amitabh Bachchan, and then Dharmendra. Though I visited those countries only recently, the obvious connect is Sholay.

The running joke in the film industry is that whenever GP Sippy’s coffers started to empty, he would re-release Sholay in theatres and make a new film with the profits. I first saw the film on the big screen in 2004 at Gaiety-Galaxy in Bandra—a complex comprising seven single screen cinemas with supercheap seats that also serves as Bombay’s ultimate barometer for measuring subaltern tastes. The hall was packed.

Ramesh, I suppose, saw none of that money. Neither did the writers Salim-Javed. They were employees on the payroll of Sippys when they originally wrote Sholay. This wasn’t the case with Zanjeer, which is why they could go to court demanding compensation of Rs 6 crore when Reliance recently remade their 1973 blockbuster script. I don’t know if they got a penny.

The last American screenwriter I met in LA, Anthony Zuiker, owned a private jet, besides Hollywood bungalows. He had come up with the idea of the TV show CSI in 2000. His bank balance has since been swelling every time any version or episode of the series plays on any TV set anywhere in the world. He is also an executive producer.

Now I have never met or spoken to Sascha Sippy. He lives in Dubai, is apparently a British citizen and is a wonderful mystery to me. I approached him directly and through his lawyer for this piece; he didn’t respond. So much the better, because I can now retain my vision of him as a handsome Hugh Grant kind of character in his late thirties who, as in the film About a Boy, chills out, chases women and has to do no work because he can forever live off the royalties from his father’s song—or, in Sascha’s case, his grandfather’s film. It’s so much cooler an inheritance to flaunt than factories or real estate. Women might even dig you for it.

I don’t know if Sascha has an alternate profession. He has a team that spots and flags references to characters or dialogues from Sholay in any movie (lately, the Kannada Pawan Kalyan- starrer Gabbar Singh) or ad (a Renault commercial currently under litigation) so he can claim the royalties that rightly accrue to him. I’d like to believe this affords him a decent lifestyle. The film remains just the way it was in the 70s. It continues to top any list of ‘greatest Indian movie ever made’ you’re likely to come across.

Its American equivalent on nearly all such lists, Citizen Kane (1941), was a significant technical advancement for its time. It is a dated, cinematic bore now. This can’t be said for Sholay, maybe because the performances in the film haven’t aged.

If the current crop of actors were to play Jai and Veeru wearing the same denim jacket and jeans, or Thakur with a shawl covering the lack of his limbs, they would pitch their performances no differently from Bachchan, Dharmendra and Sanjeev Kumar. This may not be true for Dilip Kumar or Prithviraj Kapoor’s role in Mughal-e-Azam, or Guru Dutt’s in Pyaasa: the other two evergreen hits that make it to Bollywood’s best-ever lists.

If anything, the women in Sholay—Basanti (Hema Malini) and Rama (Jaya Bhaduri), who is briefly shown to be happy in a flashback sequence)—seem too imbecilic for contemporary tastes.

Several directors—Subhash Ghai (Karma), Rajkumar Santoshi (China Gate), Shekhar Kapur (Joshilay), etcetera— have attempted their versions of Sholay. In 2005, Sascha stalled Ram Gopal Varma’s plans to call his variant Sholay’s official remake. Varma had to call it Ram Gopal Varma Ki Aag, christening his villain Babban instead of Gabbar (Bachchan played that part in a Halloween dress). My favourite reinterpretation in Varma’s Sholay was his bearded Thakur (Mohanlal). He said this is because a man who has no hands obviously can’t shave. Well. There are a lot of other things he can’t also do, no?

The way in which that picture incensed audiences nationally intrigued me, because if that many people had actually seen the film, it couldn’t have bombed so badly.

A remake is obviously unnecessary when the original is still around. Even I can claim to have grown up on Sholay, though it was released a few years before I was born. Lines from the film have turned into such popular proverbs that it is hard to assess if we really first heard them in the film—‘Ghoda ghaas se dosti karle toh khaye kya?’ (If a horse befriends grass, what will he eat?); ‘Loha garam hai, maar de hathoda’ (The iron’s hot, strike the hammer); ‘Saala, nautanki’ (Damn clown); ‘Jo darr gaya, samjho marr gaya’ (If you’re scared, you’re already dead).

I knew relatives who had seen Sholay 20-30 times in theatres, which might be seen as a waste of precious lifetime. This is from a world right before television. With each viewing, they would discover something new, and that is because the massive galaxy of characters in the film appears with their own side stories or short films—whether it’s the Hitler like jailer and his mole Hari Ram, Thakur’s man Friday Ramlal, or Imam sahib and his son Ahmed. Every minor character, even if it’s the postman who appears for a few seconds, has a name you can recall him/her by. This is true of all epics.

Reportedly pooling in additional investment of around Rs 25 crore, Sascha decided to digitally restore and re-release Sholay in 3D this January, assuming a whole new generation would be curious about this modern national epic. His uncle, director Ramesh, legally objected. There was no restraining order on the film’s release; the film is the producer’s property. The case is still in court.

When I went to watch Sholay in theatres yet again, there were hardly any people in my theatre. What happened? Had the embers died down finally? Did the light go out of our life? I am told Sholay commercially flopped for the first time in 2014. The older audiences couldn’t care less for 3D. I watched most of the film without the glasses on. The post-91 young, with enough entertainment on their plate, could hardly spare half a working day (almost three and a half hours running time) to sit in a dark hall on expensive seats to watch a film from their father’s generation.

Like all epics, I think Sholay will live on through its mythological characters, situations and one-liners, dispersed through television, spoofs, commercials and games, where the attention span demanded is much shorter. It’s a phenomenal property. Sascha must continue to monetise it.