Without the flair of football individuality, this World Cup will only merit a yawn. 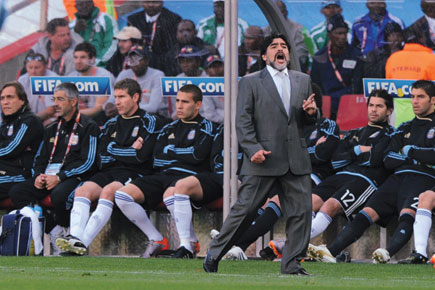 Without the flair of football individuality, this World Cup will only merit a yawn.


I’ve been watching the World Cup for nearly two weeks now, and I have a question to ask: where are the characters? Cristiano Ronaldo is cute, Messi surely has heartthrob looks, but so did David Beckham, both cute and heartthrob. But do you remember him being sent off with a red card in the crucial game against Argentina in 2002, or when he was forced to sit out the last 40 minutes of the quarterfinal match against Portugal in 2006 due to an Achilles tendon injury and England lost on penalties? He sat on the bench and wept, openly.  And you wept with him. At the very least, your Adam’s apple bobbed up and down a few times. Would you do that for Messi or Ronaldo?

Is there anyone in this World Cup who can shake his hips like Roger Milla of Cameroon used to do at the corner flag after he scored a goal? Does anyone have the smile of Ronaldinho, which could light up a Mohenjodaro at night? Who has the regal golden mien of Valderamma, which sent out the message that no one should mess with him? Where is Jose Higuita of Colombia, the goalie who was always trying to score goals, trying to dribble past rival players, and actually scored eight goals from 68 international caps, from free-kicks and penalties? He also invented the scorpion kick, a clearance where the keeper jumps forward, arches his legs over his head, and in doing so, kicks the ball away with his heels.

And you do not need to be a madman like Higuita to be a character. You could be the gentle Buddhist Roberto Baggio, or the unflappable Franz Beckenbauer, expressionless and efficient like a machine. You do not need to be a bad boy like Paul Gascoigne, recently found begging, after suffering long bouts of alcoholism and mental illness. But anyone watching TV that day in July 1990, when England played West Germany in the semi-final, will remember Gazza getting a second yellow card, which meant he would not be able to play the final if England went through. His despair and his tears would have touched anyone’s heart, however much you may have hated Gazza’s irresponsible lifestyle. And you don’t need to beat up your wife, like Gazza did, to be a character; you can just be Lothar Matthaus, a pint-sized dynamo who could blow a goalkeeper into the net at 35 yards. And he never smiled.

In the current World Cup, the most interesting event—or rather, expression of individuality—I have seen is Jovanovic of Serbia, after scoring against Germany, pointing to the crowd, running straight at the benches, and jumping over the fences into some sort of what could only be described as a moat-substitute to separate the mad fans from the players, where a large man dressed all in black started beating him up in pure joy.

Diego Maradona won one World Cup through sheer soccer artistry  and almost won another by forcing his rivals into lethargic and resigned submission. If this does not prove that he was the greatest footballer of all time, I don’t know what will. The next time, they caught him taking drugs and sent him off. So, not only was he the greatest footballer of all time, he was also jiving in his spare time.

As for me, if the most interesting character in a World Cup is a 49-year-old man in an Italian suit shouting instructions at talented toyboys, it’s boring.