Once upon a Time in Assam 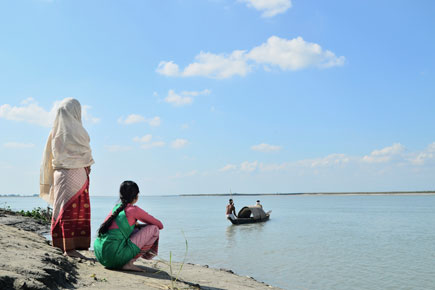 Zerifa Wahid, 36, a popular actor in Assam, has never had the chance to play the role of a typical mother, let alone a devilish psychopathic step-mother writhing in murderous jealousy. When Wahid read the script of Kothanodi (The River of Fables), a multi-narrative film which knits together four shades of motherhood derived from Assam's most beloved compendium of children's tales Burhi Aai'r Xaadhu (Grandma's Tales), she instinctively set her heart on Senehi from the frighteningly tragic story of Tejimola—Senehi, the evil stepmother who, while her merchant husband is called away to a distant village on business, gruesomely impales her blooming young stepdaughter Tejimola to death beneath the pestle of a wooden rice pounder.

In Kothanodi, Senehi is exquisitely alluring and full of youthful fervor—she yearns for greater attention from her old and wayfaring husband. To prepare for the climactic scene where Senehi is completely drunk on impotent rage and frustration, ready to kill Tejimola, Wahid duly instructed her make-up artist to not let anyone disturb her while she quietly drained her energy in an all-consuming meditation of pure, unadulterated pessimism. She could have simply liquored up to look worn out—to attain that hunted look of a murderer with bloodshot eyes. Instead, for the three days it took to complete shooting that nerve-shredding scene, " I used to sit quiet and somewhere alone. I wanted to go into that intoxicated state. It really does tire you—when you deliberately fill your yourself with so much negativity. This technique helped me prepare for that scene," says Wahid.  The result is a butchery so slickly hammered out in terms of technical finesse and emotional judder that you suddenly know why Tejimola is perhaps the most dreaded name in the annals of Assamese folklore and why no parent in the state has ever dared to name her daughter so.

But this isn't the only inspired scene in the Assamese film Kothanodi, debut feature of independent filmmaker Bhaskar Hazarika, set to release early next year. The three other tales besiege us with enough phantasm, psychological complexity and edge-of-the-seat moments to make Kothanodi one of the most interesting re-tellings of popular folk tales on Indian celluloid. Previous notable cinematic iterations of folk tales have either struck a scornful note, as in Satyajit Ray’s Goopy Gyne Bagha Byne (1969), or have been imbued with an elegiac tone like Mani Kaul's Duvidha (1973), which was again revived for contemporary audiences in Amol Palekar's  Paheli (2005). But Kothanodi follows in the international tradition of alternative adaptations of evergreen stories like Snow White and the Huntsman (2012) and Maleficent (a 2014 interpretation of Sleeping Beauty). It employs elements of dark magic realism and brings to sinister life tales from Assam's bestselling children's book written in 1911 by the state's master of satire, Lakshminath Bezbaruah. In The Outenga Maiden, a woman is abandoned by her husband and driven out of her village when she gives birth to an elephant apple, which  diligently follows her wherever she goes. In The Story of Tawoi, Malati decides to save her newborn from the clutches of her husband and his uncle, both of whom have buried her previous three newborns deep in the forest. In her maternal anguish, she is made to confront the most horrendous truth. And in another village, a rich and proud Dhoneswari, consumed by inveterate greed, marries her daughter to a python in Champawati.  Along with Tejimola, these three stories seamlessly alternate and intersect with smart pacing and technique, with a gradual build-up of dread and unease. Shadows, perversion of human emotions, heart-rending cries of dying children, the dazzling menace of grieving mothers, the deathly stillness of the mundane, and the mournful beauty of the ever-shifting sand-banks of the Majuli river island—where the film seeks to evoke the unvarnished idyll of a rural Assam—all play into each other and culminate in a spine-chilling climax.

Starring veterans like Seema Biswas and Adil Hussein, along with many other well known faces from Assam, Kothanodi is a powerful ode to the literary and cultural heritage of Assam, at a time when we are witnessing a burst of exciting new voices in regional cinema like Court, Killa, Chauthi Koot and many more.Kothanodi first premiered at the 20th edition of the prestigious Busan International Film Festival this year and was later shown at the 59th BFI London Film Festival. In India, it opened to packed auditoriums at the 17th Jio MAMI Mumbai Film Festival and the 4th Dharamshala International Film Festival (DIFF). Contextualising the place occupied by Kothanodi in the scheme of present-day regional cinema, Tenzing Sonam, co-director of DIFF, says " Here is a film which is an adaptation of a fable, but done in a way that it feels immediate and real. Bhaskar managed to take it beyond the realm of the fairy tale and make it very relevant to the modern-day. There is a new sensibility at work here. The younger generation of indie filmmakers…their sensibilities are much more contemporary , they have a much broader vision of what filmmaking is about." In light of this view, it is interesting to note how Kothanodi makes subtle references to the still prevalent practise of medieval crimes like witch-hunting and female infanticide in the bleak, foreboding scenery of the film.

Part of the reason why Kothanodi has a lingering effect, long after the curtains come down, is because Hazarika,who co-directed the documentary Live from Peepli, shied away from any trade-off to recreate the period setting of a rural Assam in a pre-colonial era. He ventured deep in the river island of Majuli, whose sweeping vistas have no trace of tea plantations, and found villages devoid of tarred roads or tin roofs. Within the constraints of an extremely limited budget, he roped in a stellar crew of writers and editors, including famous Assamese novelist and short story writer Arupa Patangia Kalita and National award-winning editor Suresh Pai , who have made Kothanodi an ethnographer's delight.  From re-working  long-lost  tracks from the Bodo, Mishing, Karbi communities to decking out actors in the attire of the Motok tribe in the python wedding sequence, from showing us the colours of a Mishing Bihu to unveiling regal garments flaunted by the village folk—the devil, quite literally, resides in the careful detailing. And when Hazarika ran out of funds, he turned to crowdfunding—scripting another successful story by outstripping his target of Rs 20 lakh, animating an already gathering momentum of indie filmmaking in Assam. "After we crowd-funded  for Kothanodi, once it became successful, there have been three or four more attempts by independent Assamese filmmakers to raise money through crowd-funding.. this is a good development. Traditional film investors hesitate to put money in an Assamese film… but now I think crowd-funding is showing the way forward to Assamese filmmakers."

It is while working on the sets of Kothanodi with a crew of veteran technicians from the Assamese film industry that Hazarika had a feeling in his bones that his film might be a game-changer—when the light boys in his team told him that they had never seen an Assamese film like this before. Neither have we.