On the Other Foot

Chidambaram forgave Jarnail Singh, we hear. But who is it that should be asking for forgiveness? 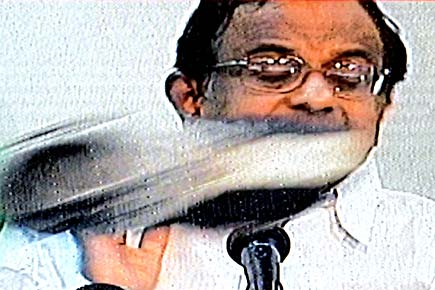 Chidambaram forgave Jarnail Singh, we hear. But who should be asking for forgiveness?


Piety sits uneasy on those who condemn Jarnail Singh. His identity as a human being precedes the badge of being a journalist. And what he did is what any person should do when faced with another prevaricating Congressman on the issue of the 1984 riots in Delhi. It would be more appropriate to ask what the others in the room were doing when the Home Minister of the country could not come clean on the massacre of thousands of innocents. It speaks badly of them that they kept their shoes on.

There is an oft quoted Persian verse that Guru Gobind Singh had addressed to Aurangzeb:

All Jarnail had in hand was a shoe, with little doubt left that all other means had failed. The institutions of this country have let down the victims of the 1984 massacre. They have been deliberately misused and manipulated by the very men who organised the riots. The case against men such as Jagdish Tytler and Sajjan Kumar has been made out often enough. Witnesses have been threatened and bribed, testimonies have been coerced. Yet, enough has survived for the courts to look into the charges again. That the CBI should deliver Tytler a clean chit only days after his name was declared as a candidate speaks for itself.

When Jarnail picked up his shoe, he was reflecting an anger that the Congress does not seem to realise exists among Sikhs, and among those who care for justice. This is not an anger towards Tytler or Sajjan Kumar alone; the two men just happen to be the most visible symbols of the party’s failure to address the issue. The anger lies below the surface, ready to brim over when stoked. And the Congress has done just that. The party believes that an expression of regret for the violence by its leaders was enough, and it is now free to re-introduce to the electorate the very men who symbolise the failure of justice. Maybe it should think again.

Consider the case against Sajjan Kumar. The CBI case against him was booked only in 1990, once the Congress was out of power. He was acquitted in 2002 by the Delhi High Court because two police officials deposed in his favour. The Tytler case is even more interesting. The Nanavati Commission in 2005 found that Tytler ‘very probably’ had a hand in organising the attacks. The Action Taken Report was tabled by Chidambaram’s predecessor as home minister, Shivraj Patil, and it said further action against Tytler was not justified because ‘the commission itself was not absolutely sure about his involvement in such attacks’!

Given this, the clean chit and the ticket to Tytler have only reopened questions about the Congress’ role in 1984. One indication of what has still not been brought to light comes from Manoj Mitta and HS Phoolka’s book, When a Tree Shook Delhi. Writing of the current Commerce Minister Kamal Nath, they say, ‘Having spent two hours with the mob in front of Rakabganj Gurdwara, having done nothing to help the two Sikhs lying in a critical condition, having allowed the mob and the police to carry on with their hostilities against the targeted community, Kamal Nath was clearly part of the problem, not the solution. The unanswered questions about his role in the Rakabganj Gurdwara episode might well hold the key to uncovering the high-level conspiracy behind the 1984 carnage.’ In no other democracy could a minister continue after such a book. The party did not even pay heed.

In substance, the charges against Kamal Nath parallel those that have led to the arrest of Gujarat Women Development and Child Welfare Minister Maya Kodnani for her role in leading a mob in the 2002 post-Godhra massacre. In fact, much of the recent activity in the 1984 cases stems from what happened in 2002. It seems to have taken another act of similar enormity to awaken our conscience.

In the context of Gujarat, we have evidence of how witnesses have been bribed and coerced. We have seen that testimonies change over time, even though we are barely seven years from the events. Twenty-five years have passed since 1984. That there are still witnesses around speaks of the depth of the trauma that was inflicted on the victims.

But the Congress seems no closer to realising this truth. Sentiments are nebulous things. A shoe is not. Which is why Jarnail’s act was necessary. However, party spokesperson Abhishek Singhvi said, “The method and modality of giving vent to that anger was wrong. It will be the beginning of the end of journalistic morality and ethics and also democracy if giving vent to anger through that method is accepted and justified.” One shoe at the end of 25 years is the end of journalistic morality?

Singhvi spoke with the same smugness that Chidambaram had displayed at the press conference. He deserves the same response. Chidambaram has had the temerity to say he has forgiven Jarnail. Once again, he and his party have been quick to forget that they are the ones who have to ask for forgiveness.