On Humiliation and Its Spectacle

Good doesn’t necessarily follow from blackening someone’s face, even if it appears to be deserved 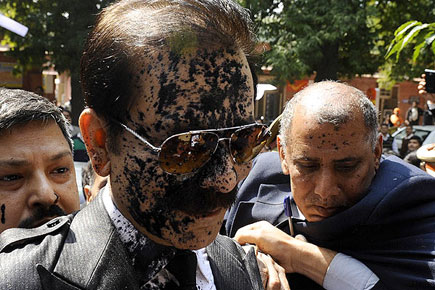 Good doesn’t necessarily follow from blackening someone’s face, even if it appears to be deserved

There is a secret pleasure in seeing wealthy, powerful men brought to their knees. And especially if such a man heads an organisation that has serious legal questions around it, any humiliation is an affirmation of all the middle-class values ingrained in us since childhood: be honest, do good, act fair, character matters more than ambition, principle always weighs more than gold—or there will be consequences. But usually there are no consequences; most lives end up unremarkable anyway, no matter how carefully people tread the line of goodness.

So consider the warm feeling many felt on seeing Sahara chairman Subrata Roy’s face blackened with ink outside Supreme Court. It is an image that will not be forgotten in a hurry and will be perceived as elementary justice. But it is not.

There is a difference between the humiliation the Supreme Court doled out to Roy by making him spend time in jail and the ink that came flying through the air carrying all the outrage of an angry slice of India. To gloss over this distinction is to equate due process with vandalism.

It is difficult to appreciate what an act of public humiliation entails unless the personality is removed from the analysis. To illustrate this, let’s take another case: that of former DGP SPS Rathore who molested a teenage girl, Ruchika Girhotra, two decades ago and then drove her to suicide by getting the police to file false cases against her brother.

Here was a man who reportedly threw a party to celebrate the day she killed herself. And so, when in February 2010 he was outside court and one Utsav Sharma suddenly stabbed him repeatedly in the face with a pocket knife, it should have been unequivocal just desserts.

But the next year, Sharma was waiting with a meat cleaver outside a court for Rajesh Talwar and this is where the lines get fuzzy, because half the country believes Talwar killed his daughter Aarushi, and the other half doesn’t. To the latter, the image of a bleeding Talwar is heart wrenching; the icing of suffering on a cake that contains every possible grief that a man can endure. It may have been good that Utsav Sharma gave a lesson in pain to Rathore, but it was an unforgivable act with Talwar for those who believed in his innocence.

Appearing on television some days after the incident, Talwar cried and said he had no faith left in humanity. It is interesting that he used that word. We could always argue whether such a thing as ‘humanity’ exists; whether it is all a veneer, some semblance of order under which there are no rules in operation and therefore all actions are legitimate—if Roy can make thousands of crores by allegedly abusing the trust of poor villagers, then it is proper that he is also wronged in some small measure.

But humanity is also something which comes into existence by its reaffirmation. It is not something that God couriered on the eighth day but accumulates by our belief in its necessity. When wanton acts are legitimised, they shave away a little bit of the civilisation that has so painstakingly evolved.

If we are human, then even evil must be dealt with according to good norms. If ink can be thrown at Subrata Roy’s face today, then it may be thrown at you tomorrow, and who is to stand by your side and say you did not deserve it?