Nepal Earthquake: Help one another or die

What the recurring tragedy of Nepal conveys to other Asians 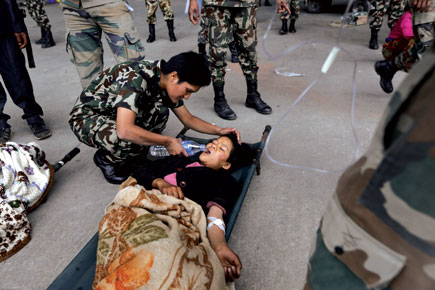 Even if only a few Nepalese grumbled about Indian journalists during one of South Asia’s worst natural disasters, one complaint is one too many among peoples who are so closely linked that life and death know no borders. What is at stake is not just the reputation of Asia’s most defiantly independent media, but also the dynamic neighbourhood diplomacy that recently earned glowing praise from such a stringent critic of Narendra Modi’s other actions as Arun Shourie. What matters more than either, as landlocked Nepal—indomitable as the Gurkha fighters it supplies India, Britain, Brunei and Singapore with —grapples with a second bout of nature’s fury in 17 days, is the delicately poised future of the South Asian Association for Regional Cooperation (SAARC).

My mind goes back to JR Jayewardene’s sonorous warning when SAARC was launched in Dhaka in 1985. “India, the largest in every way,” he urged, “larger than all the rest of us combined, can by deeds and words create the confidence among us so necessary to make a beginning.” Someone sitting next to me thought Sri Lanka’s president was paying India a compliment. That astute Kashmiri diplomat, Parmeshwar Narayan Haksar, once the power behind Indira Gandhi’s throne, knew better. He interpreted the comment to mean that “India, as a big brother, must be at all times accommodating and tolerant towards the propensity for mischief- making of the younger brothers.”

Monarchical or republican, Nepal has not always received the careful handling it deserves. ‘We must not talk down to the Nepalese, but talk to them with firmness but with courtesy,’ Haksar advised in a confidential memorandum in 1969. An ambassador who prostrated himself before the king as Vishnu incarnate didn’t do that. Neither did the external affairs minister who bluntly told another monarch that he wasn’t a royal subject. Haksar’s own prescription of every so often holding up essential supplies of kerosene for the landlocked country didn’t generate goodwill or induce cooperation. No wonder the Indo-Nepalese Joint Commission hadn’t met for 23 years until Sushma Swaraj went to Kathmandu last year. Modi’s two-day visit in November 2014 was the first by an Indian prime minister since Inder Kumar Gujral’s in June 1997.

Nepal is unique. It was the world’s only Hindu kingdom but transited through a bloody decade-long civil war, a palace massacre, and several people’s revolutions from absolute monarchy to Maoism to parliamentary democracy. Now, it is engaged in drawing up a secular constitution for the Federal Democratic Republic of Nepal. These tempestuous turns of the wheel and a lowly rank in the Human Rights Index (No 145 among 187 countries) haven’t dimmed a certain lively commitment to improving the human condition. As befits the land where Gautama Buddha was born, Nepal is one of the few Asian countries to abolish the death penalty; it’s also the only one to legalise same-sex unions and recognise a third gender. Reading of the horrors of two rounds of earthquakes, some Britons remember gratefully that when the Blitz battered London during World War II, impoverished Nepal generously sent £400 for relief.

Geography creates a sense of siege. So conscious has Nepal always been of its vulnerable position that Prithvi Narayan Shah, who united the country in 1768, likened it to a yam caught between two boulders, India and China. Being culturally more Indian than Chinese, the 27 million people beyond the open border with Nepal who can come and go and work as they please in this country are more volatile than, say, the neighbouring Bhutanese. They are more given to parading their emotions. An excited young Nepalese diplomat exploded in 1973 that having breakfasted on Sikkim, India was planning to eat Bhutan for lunch and Nepal for dinner. “But we’ll give you indigestion!” he growled. There were street protests in Kathmandu then and frantic appeals to Washington to underwrite Nepalese independence.

Kathmandu’s request asking foreign relief teams to wind up operations may have nothing to do with historical fears. In fact, a Nepalese official justified the notice by citing the International Search and Rescue Advisory Group’s seven-day limit for relief missions. But tweets emphasising Nepal’s ‘sovereign’ and not ‘satellite’ status expose the sensitivity that once prompted Gujral to promise that although India could not shrink to order, he would ensure its bigness did not impinge on relationships with neighbours. That is the most any Indian government can do. It is also the least if SAARC is ever to fulfil its promise of being to the benefit of a quarter of humanity.

An American anthropologist with experience of the catastrophic Haiti earthquake in 2010 when 230,000 people died warns in Nepal’s context that “local people need to be in charge of the response”. He has in mind the compelling emotional and ideological considerations for containing external help. But the Armenian earthquake of 1988 that killed 80,000 people highlighted the sound practical reasons as well. The Office of the United Nations Disaster Relief Coordinator (Undro) warned in 1988 that spontaneous and generous global help ‘can cause as much chaos and confusion as the disaster itself’.

Foreign rescue teams were stranded without interpreters in Soviet Armenia. Relief planes crashed into mountains. Massive consignments of unsolicited material clogged pipelines. As confusion mounted, the International Red Cross urged Western governments to halt aid. ‘New groups will only be contributing to a second disaster,’ it warned. The phrase ‘second disaster’ passed into the language of social welfare. Haphazard foreign charity like tuna fish and mayonnaise for starving Nepalese or neckties and swimsuits for victims of the 1993 Maharashtra earthquake when 20,000 people died only rubs salt in the wound.

Not that xenophobic pride is always innocent or helpful. During the 20th century’s worst catastrophe when China’s north-eastern city of Tangshan was levelled and a quarter of a million people wiped out, Chinese air force jets shot down swarms of Taiwanese balloons each carrying 180 kg of relief material. Nor did the 100,000 people of the Soviet town of Ashkabad near the Iranian border receive any help before they were buried alive in 1948 because censorship didn’t allow a whisper of the earthquake to rustle the pages of Pravda. When Jakarta restricted the movement of journalists and aid workers during the 2004 Tsunami, ostensibly to protect them from Acehnese insurgents, people wondered if it was to conceal the transport of Muslim militants into the stricken area. The Indonesian government was also suspected of trying to control and take the credit for relief and thereby gain an edge over the rebels.

Complaints abound on both sides. Third World recipients are suspected of misusing relief supplies. No Afro- Asian likes conceding that Westerners are better at managing crises. They are accused of stinginess and of seeking special advantages. The old gag about American missionaries going to Hawaii to do good and staying to do well still haunts Afro-Asian thinking. Its psychological rationale crops up whenever a big country deals with smaller neighbours. It seems churlish to recall that flood- ravaged Bangladesh sent back Indian relief helicopters in 1988 or that Sri Lanka refused Israeli aid in the early stages of the Tsunami.

The answer lies in an effective streamlined global organisation that combines early warning with rescue and relief without arousing national suspicions. Most earthquakes can be anticipated if not predicted to precision, and Nepal’s twin tragedies were inherent in the geological composition of the Himalayas.

A permanent counter mechanism is especially important for Asia, which accounts for nine of the world’s 10 most disaster-prone countries. Not only do 85 per cent of deaths from natural hazards occur in the Asia-Pacific region, but 95 per cent of these are caused by earthquakes, floods, typhoons and tsunamis.

Undro never seems to have enough funds or organisation to be properly effective. The Tsunami, which killed about 275,000 people, injured tens of thousands and rendered 10 million homeless, prompted a new stirring of the global conscience: the French Civil Protection Agency, Indian Space Research Organisation and the United Nations Office for Outer Space Affairs quickly activated the International Charter on Space and Major Disasters. The unprecedented coalition of India, Australia, Japan and the US to tackle the havoc pointed to a possible new era of global cooperation.

Before the second earthquake struck on 12 May, there were only 962 Indians among 4,050 overseas personnel in Nepal. Nevertheless, India’s National Disaster Response Force promptly assured Kathmandu they would be withdrawn within the deadline. Presumably that will not stop Indian contributions to Kathmandu’s $2 billion reconstruction and rehabilitation fund or exemplary Indian moves like Mamata Banerjee’s ‘goodwill gesture’ of sending modest supplies of tarpaulin, dry food, water bags and blankets. There was no question of South Block asking her not to visit Nepal, as it reportedly did Nitish Kumar: her walk across the Mechi bridge and brief halt in a rest house near Kakarvitta did not burden either government with protocol and security responsibilities. Nepal’s urban development minister, Narayan Khadka, seemed genuinely pleased to welcome the Chief Minister. Her few words in response also struck the right note of neighbourly concern, willingness to help without encroaching, and admission of West Bengal’s limitations. No one could ask for more.

It bears noting that one heard no complaints about Indian officials or relief workers whose money and authority might arguably have grated on recipients. Instead, Indian journalists covering the earthquake of 25 April were accused of ‘patronising’ and ‘insensitive’ behaviour. One explanation could be that since criticism of officials might offend New Delhi and attacking welfare agencies could alienate powerful global organisations, critics prudently chose the weakest link in the chain. But there may be some substance in the charge that Indian media personnel ‘acted like they are shooting some kind of family serial’. Given television’s focus on entertainment, the tragedy had to compete with the Salman Khan saga.

Having said that, it must be stressed that the media must not be confused with missionaries. As some Nepalese acknowledged, Indian coverage helped draw global attention to the disaster. The criticism that instead of ferrying ‘tonnes of reporters’, Indian aircraft should have carried relief material and used the vacant space on return flights to transport patients to hospital smacks of naiveté. An authoritarian unitary state might be able to apportion aircraft for the media and relief, specify the number of personnel in each category, and decide how vacant space is used. If things happened that way in India, the world would have ignored its media.

Nepal’s sensitivities must be respected. But its pain is not exclusive. The India-Nepal relationship transcends the universal inter-dependence of John Donne’s ‘Any man’s death diminishes me, /Because I am involved in mankind’. In London on 25 April, I first heard of the earthquake from my son in Delhi. Deep telephoned to say he had felt a shudder in his Defence Colony flat. Tremors occurred in Calcutta, Lucknow and Jaipur. Some 60 people died in Bihar. This time, too, Delhi, Uttar Pradesh, Bihar, Uttarkhand, Jharkhand, West Bengal and even distant Tamil Nadu felt the lash of the violence that paralysed Nepal on 12 May. Tibet and Bangladesh weren’t spared either.

As Pakistan’s deadly floods had already confirmed, South Asia is united by suffering. When death and destruction strike, neither Indians nor Nepalese can afford to ask selfishly for whom the bell tolls. History, geography and culture warn it tolls for all of us. To adapt the hymn WH Auden composed as war clouds darkened menacingly over Europe in September 1939, We must help one another or die.