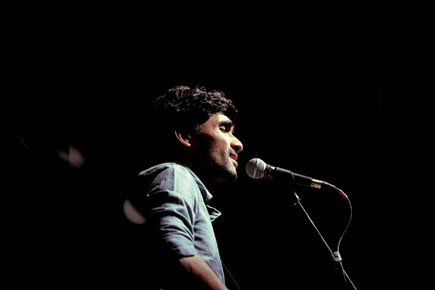 A rash of singer-songwriters has erupted across the country. Some of them don’t know when their guitars are out of tune, some are given to cocky, verbal incontinence on stage but have little to show in terms of talent, and some others get by performing cover songs better than their own compositions. Someone needs to hand out anti-depressant prescriptions at these gigs.

Occasionally, a singer stands out despite the clanging of cutlery at a club and rises above the loud chatter of suits at the bar who have no interest in music whatsoever, as he works his way through a quiet song. Singer Prateek Kuhad from Delhi makes a living writing such songs. He began his career playing early sets—hour-long gigs meant for budding bands and artists that precious few besides friends and family showed up for— at Blue Frog in Mumbai back in 2011. As much as I respect artists who write in a language other than English, I’d dismissed Prateek’s Hindi songs. They weren’t compelling enough to draw a crowd to a free gig, leave alone a ticket-paying audience. Over four years, though, Prateek has built a repertoire of sweet little folksy pop songs (in English) that he sings in a clear, earnest and instantly likeable voice that needs no more than intricate finger-picking to support. He has made it because of talent, grit and by his own admission, a privileged background. Says 25-year-old Prateek, who moved back to Delhi from New York, where he studied, in 2013, “That I don’t have to worry about where my next meal is coming from or about rent, gives me the opportunity to spend more time to work on my craft.”

In early February this year, Kuhad released his debut album In Tokens & Charms in Mumbai. He chose amphitheatres and smaller capacity auditoriums across the country over clubs and bars. A wise, yet brave move, given that his vocals are the centerpiece of his music and every dud note sounds amplified in amphitheatres. In Mumbai, the show was at Little Theatre at the National Centre for the Performing Arts (NCPA) that can seat precisely 114 people. If you’ve attended a show or two at NCPA, you’ll know that the average age of the audience is 50. For Prateek’s show, there were no women in raw silk saris and pearls, or men in immaculately cut formals queuing up, but wide-eyed young women and men mostly in their early twenties.

I also saw a bunch of new faces that I normally didn’t see at gigs. Sony Adhav, a 32-year-old marketing professional travelled all the way from Malad in North Mumbai, where she works, to the other end of the city, where NCPA is located, for a mid-week gig at 8 pm. Office goers are rarely inspired to brave rush hour traffic or trains packed to capacity to support the arts in Mumbai. “I first heard Prateek on VH1 Top 10 a few weeks ago and then heard him on radio again,” said Adhav, pointing to the relevance of music television and radio channels when I’d given up on both mediums.

That evening, Prateek delivered a brilliant performance. There was no desperate need to please, no arrogance and Adhav’s two-hour journey to NCPA seemed well worth it. “All my friends love his voice,” said Adhav, “Prateek’s quite special.” He is. Prateek has a degree in Math and Economics and a disarming presence, which is in keeping with his gentle ballads. I played Prateek’s album to a 30-year-old investment banker whose playlist only features Bollywood hits such as Chittiyan Kalaiyaan Ve. After listening to a couple of songs, he asked, “Is this a country singer?” I was kicked to tell him that this was a young singer based in Delhi who quit a high paying job, involving statistical analysis at an economic consultancy in the US, for a career in music.

While it’s perhaps less demanding and definitely more economical for singers to perform as solo artists—no coordinating with band members to free up their schedules for shows or rehearsals, nor dividing the pittance of a performance fee (anywhere between Rs 10,000 and Rs 15,000 for a band that has been around for three years)—survival is still an uphill task in the Indian music industry. Prateek gets my vote not only because he has cleaved to his craft, but has turned into a voice that needs to be heard.