Monkey Cap in the Bag

What is the source of the travel virus that Bengalis are infected with? 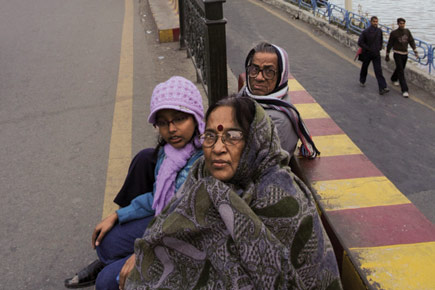 What is the source of the travel virus that Bengalis are infected with?


A friend of mine had gone camping in Lahaul-Spiti in the higher reaches of the Himalayas. He woke up one morning and stepped out of his tent to be greeted by a startling sight. A Bengali tourist was standing there, looking grimly at the peaks, beyond which lay Tibet. His expression clearly reflected what he was thinking: how do I get beyond these peaks? There was no other tent in sight, no other human being in sight, except for this man in a monkey cap. How did he reach there?

But the Bengali tourist reaches. He reaches everywhere, driven by some mad wanderlust. No tourist spot is safe from him. Now, in the days of the Internet, things have changed, but till recently, people used to queue up from the night before in front of Kolkata ticket counters the day Durga Puja train bookings opened. Every year, the railways run dozens of special trains only to carry Bengali tourists all over the country during the Puja holidays. And the monkey cap blooms during winter vacations across India. There would be two children skipping ahead, followed by the man of the house, the monkey-capped one, followed by his wife, carrying a plastic bag and a water bottle, and shouting at the kids to slow down, with the grandmother bringing up the rear. If you know the man, you ask him: “So, dada, how’s it going?” And the man would invariably rub his tummy, shake his head and say: “Na, jolta thik sahya hochchhe na (No, the water’s not suiting me).” No water outside Bengal has ever suited the Bengali tourist.

Who is this man? He is usually employed in the government or a public sector unit and is out to exploit every penny of his annual leave travel allowance. He studies up the material, makes careful plans, checks with friends and acquaintances, finds out which is the cheapest decent hotel. Holiday homes of companies where his friends work are a preferred option, because they are cheap and you can do your own cooking. He takes photos and shows them excitedly to friends and colleagues. After the Puja holidays or the winter vacations, no work happens in Kolkata’s government offices for some days, since everyone is recounting stories from their travels, how Babloo almost slipped and fell into the Ganga at Hardwar, how I didn’t enter the temple at Kanyakumari because one has to take off one’s shirt to go in.

But what is the source of this virulent travel virus? Bengalis are a young race and not much is known of their ancient history except for one line in the Mahabharata. Bhima went to Banga with the horse of Yudhishtira’s Ashwamedha yagna, and ‘Bengalis adopted the strategy of reeds, which bend over when the wind is high’. Bengalis mostly stayed in their territory and rarely fought wars or conquered neighbouring states. I have a feeling that the wanderlust has something to do with learning English, a language that Bengalis took to avidly. By the early 1920s, Bengali authors were already writing boys’ stories about brave Bengali young men who were seeking buried treasure in the jungles of Africa and the mountains of Chile.

Obviously, this was a reflection of the nationalistic spirit, that our boys could also do what Robert Louis Stevenson’s heroes did, but it also indicates a certain boldness to go forth and explore.

There was also a health angle. Most Bengalis have over the ages believed that they are physically weak (Bengal is the largest market for Horlicks and other health drinks), and that there’s something in the air in North India that makes people bigger and healthier. So, for many decades, it was very common to go ‘west’ every year (whether it’s Pune or Nainital, everything was ‘west’) for a hawa badol (change of air). The wealthy would usually hire a house and relax there for a month or so. This percolated down to the middle class soon and the tradition has lived on. And the most common sight at any tourist spot in any tourist season is still two strangers meeting on the street and asking excitedly: “Aapni Bangali (Are you Bengali)?” Yes, half of all of them are.