Modern Man • The High Hopes of a Fussy Actor 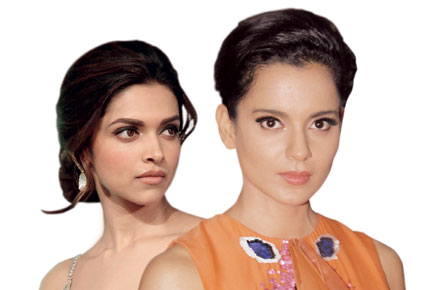 There’s a storm coming, and when it does, all pretence of niceness, professional courtesy and mutual respect will go out the window. It appears that the until-now-mostly-cold war between Kangana Ranaut and Deepika Padukone could snowball into a big, messy affair. The two actresses— who were quickly pitted against each other after Kangana’s recent successes positioned her as a potential threat to DP’s Numero Uno position—are right now said to be clashing over the issue of who is the higher paid of the two.

According to media reports, Kangana is being paid a whopping Rs 11 crore by producer Sajid Nadiadwala for the Vishal Bhardwaj-directed Rangoon. But it appears that there’s a camp working hard towards discrediting that story. Gossip has been floated that the figure is a ‘gross exaggeration’, that Kangana is demanding co-director credit with Bhardwaj, and even that Nadiadwala and Bhardwaj are having second thoughts about casting Kangana.

But the Tanu Weds Manu Returns star is unperturbed, and claims she had a laugh over the story with the filmmakers. She’s already begun taking ballet lessons for the role, and says she’s neck deep in preparation for the film.

Meanwhile, reports that Deepika is trying to ‘steal’ the film from Kangana have also been contested. The Ram-Leela star, who is currently working two shifts to complete principal photography on Sanjay Leela Bhansali’s Bajirao Mastani, while also squeezing in time to finish her dub for Imtiaz Ali’s Tamasha, “hardly has the time or the mind space to conspire against Kangana, or to make a play for a film that goes on the floors in weeks,” explains a source close to DP.

On the issue of the Highest Paid Actress, it must be noted that just months ago, there were reports that Bhansali had paid Deepika north of Rs 10 crore for Bajirao, although there are many who dispute that claim too.

Anil Kapoor, who produced and starred in the desi version of 24, has acquired the rights to bring Modern Family to Indian television next. The actor revealed during a live radio interview in Melbourne, while attending the Indian Film Festival of Melbourne recently, that he wants to cast “the perfect actors” for the central roles “because correct casting is half the battle won”.

When asked by the Aussie radio host if the Indian version of the show would retain the married gay couple characters from the American sitcom, Anil quickly piped in: “Of course we will. And who knows, maybe I’ll play one of those roles.”

Even if he doesn’t go on to play one of those roles eventually, LGBT leaders have said it was brave of the actor to do his bit to fight the stigma against homosexuality in India. Anil Kapoor has become their hero.

The High Hopes of a Fussy Actor

A respected director whose last film didn’t quite hit the mark like he’d hoped it would, is currently in pre-production on his next movie, a passion project that was put into cold storage when his producer and the actor who’d been signed to star in it fell out a few years ago. But with the producer and the actor having called a truce recently, the project has got the green light once again. Only now, the director appears to have lost the A-list actress who was originally committed to play the female lead, leaving the filmmaker to cast the role afresh.

Turns out, the director has his heart set on a newcomer who made a big impression in her debut film earlier this year. But apparently his leading man has reservations. The young actor wants a more bankable leading lady. It’s not hard to see why he’s pushing for a big-name actress. Himself recovering from a spate of flops and currently attempting a career resurrection, the actor believes a more prominent heroine will bring more value to the project.

The truth is that A-list actresses aren’t exactly lining up to work with the actor. Or the director, for that matter. Besides, the director is convinced that the one- film-old actress suits the role to a T. He even called up another director who the actor is currently with, urging him to drill sense into the fella’s mind.