He made the grim headlines lighter. The appeal of his Common Man was aided by that look of near perpetual bewilderment that took all in, but was powerless to act 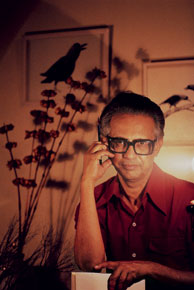 For many of us, RK Laxman was one of life’s compulsive regularities. We would first search for his box, ‘You Said It’, on the front page and chuckle over his cartoon before turning to the grim headlines that were printed in much darker colours. It was a great way of not only starting the day, but also of lessening the burden of reading bad news. Of course, it is the job of a cartoonist to introduce lightheartedness, but it is just that Laxman did it so well, day after day, week after week, year after year.

There are several reasons why he succeeded the way he did. There was something about the ubiquitous Common Man that appeared in nearly all of his small cartoons from the mid- 1950s that warmed the reader’s heart instantly. This character became an icon and is still one. There is a statue to him at Mumbai’s posh Worli Seaface that walkers and lovers on that promenade know so well. Yet, nobody really dresses that way; at any rate, it is not common. When was the last time you saw a little old man wearing a dhoti and a crisscross check jacket? Indeed, was there even a first time?

The trick was in the fact that the Common Man looked distinctive without being either awesome or stuffy, or desperately poor. By steering clear of appearances one normally associates with ‘common’ people, the Common Man succeeded in occupying a unique sartorial space. He became a metaphor because he signified something that was not there. Like all powerful symbols, the character encapsulated so much more. This appeal was, no doubt, aided by that look of near perpetual bewilderment that took in all, but was powerless to act.

That expression too was important. It could have been an angry one, or even a sad one; that is what we wear on our faces most of the time. What remains over the long term, however, is puzzlement. The logic of politics and the drive for money go well over the heads of common people, which is why it is pointless to be consumed by either rage or hope. But it is hard to look the other way even as we cannot figure out what exactly is going on. This is why the bewildered look of the Common Man expresses the deepest and most enduring sentiment in many of us.

Laxman’s best loved cartoons were not the big ones, but the little ones under ‘You Said It’ which starred the Common Man, though he was never centrestage. About the evolution of this beloved character, Laxman said that in the early years he used to cram his cartoons with lots of figures to depict the masses. It was only later that he hit upon the little old man with a checked coat who metaphorically summed up the population. Even so, be warned: the Common Man was essentially middle-class, like most common readers of The Times of India.

As the events around the Common Man were far from placid, the contrast made his presence even more striking. He was surrounded by the real world of politics and intrigue, topped by a large order of lies and deception. It took a lot of doing to make us laugh by caricaturing the ‘bad guys’ through all their foibles and flaws. His Common Man saw all, observed all, but said nothing.

In fact, he was a bit of a henpecked husband too. This again is something most middle-class married men are actually not, but feel as though they are. But there is a nagging truth to it—for the urban male in metropolitan Mumbai must increasingly make peace with the reality of a powerful female presence at home. The wife works, thinks, acts and often instructs, though never quite as plainly as the Common Man’s rather large spouse does. The figure of this woman too is a metaphor, for she is almost true, could be true, but not far from the truth. She is also bigger, bolder, plain-speaking and more decisive.

These are traits many urban males secretly long for in their wives. It would save them the hang- dog look when they make a wrong move and do a stupid thing. There is now somebody else at home who can take the real decisions and make the tough choices in an unpredictable world. In this regard, Laxman’s ‘You Said It’ is somewhat like American sitcoms of the 1970s and 1980s. In these shows, the woman is always smarter than the man, but loves him anyway.

If Laxman did not arouse lasting antipathy, even among those he made fun of, and if his cartoons went uncensored, barring two (that I know of), it is because he never crossed the ‘Laxman Rekha’. His cartoons were always contextual and not aimed at an enduring character flaw of anybody—such as lack of education or upbringing, bad diction, bad looks, or bad table manners. These are aspects that cannot be cured and it is always a lowbrow cartoonist who uses them to ridicule people. Laxman made fun of Indira, Sanjay, Rajiv, Sonia, but not by raking up private muck or public slander.

Second, he never belittled other cultures, including religious customs, beliefs or even appearances. Unlike Charlie Hebdo, you will not find any Laxman cartoon that lampoons a religion, a faith, or a tradition, barring one that I know of. During the days of Sikh militancy in Punjab, he once portrayed very Sikh-looking terrorists planting bombs in toys. That was not in good taste and so unLaxman. The reason he stayed his paint-and-brush from attacking religion or custom was because these too, like deep psychological attributes or aspects of personal upbringing, remain well after the context is over and done. For Laxman, context was always king; in one cartoon he could make fun of Indira and in another come close to extolling her.

Of course, a cartoonist needs authoritarian people almost like oxygen. Laxman was not really that effective when he portrayed Nehru as he was when he made fun of Indira’s dictatorial ways. One of his cartoons depicted Indira Gandhi’s puppet cabinet by showing one of her flunkies bringing in a couple of toy-sized chairs. In another, Indira Gandhi is inspecting a row of politicians and randomly picks one to be a chief minister and then asks him his name.

Politicians, as is well known, were generally the stuff of Laxman’s work. He relished in playing on their hypocrisy as well. My favourite is when a VIP emerges from a movie theatre after seeing the film Gandhi and remarks to his aide: “Very moving. I under- stand it is a true life story.” The other is a huddle over who to send to outer space, and the Common Man is brought in with the announcement: “This is our man! He can survive without water, food, light shelter…!” Or when a fat leader remarks, “Of course I am following in his footsteps”, as his plush car runs over what look like the impressions of Gandhi’s bare feet.

RK Laxman also wrote three novels, and I am surprised that they are not very well known. It is probably because his Common Man was such a rousing success that it put all his other achievements in the shade.

Also read
‘Nothing Common about This Man’ by Lhendup G Bhutia

Dipankar Gupta
Dipankar Gupta is a sociologist. He is the author of, among other titles, Q.E.D.: India Tests Social Theory and Checkpoint Sociology: A Cultural Reading of Policies and Politics