From Shoes to Shaadi

A meeting with the Boyfriend’s parents 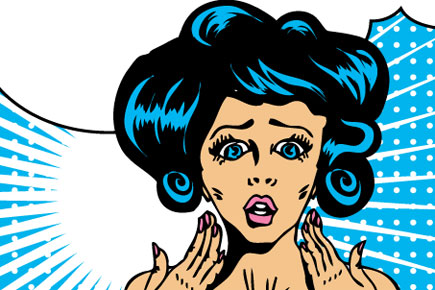 A meeting with the Boyfriend’s parents


Men, my 26 years of wisdom tell me, are horrible creatures. I’d agreed to meet the Boyfriend’s parents with nary a protest. I’d even spent an hour with our trusty neighbourhood caterer, carefully going over the recipe of the gajar halwa in the casserole I was carrying, should the Boyfriend’s mother feel the urge to quiz me about the optimum carrot-to-maawa-to-sugar ratio in the halwa I claimed to have cooked. My own mother was harder to fool. When I turned up at her doorstep two days later carrying a smaller casserole, she asked but one question: “Where, dear child, is the dabba of ghee kept in your kitchen?” Damn it. But I digress.

He unlocked the door and we entered. Three pairs of eyes swivelled towards us. In the week leading up to the meeting, I had asked the Boyfriend all kinds of questions about his family. I knew how his father felt about a certain family-owned media empire and that I was under no circumstances to mention my various stints there. I knew that his mother felt almost personally insulted when someone called Aishwarya Rai more beautiful than Sushmita Sen. I knew that their driver had two wives, one girlfriend and five children. I knew that Kaaki, his childhood nanny, not-so-secretly hoped that he would elope with her 16-year-old daughter. But I had forgotten to ask the most important question about an Indian household: do we take our shoes off before entering? There’s no one right answer. The permutations and combinations are mind-boggling—no ‘outside’ footwear in the house, not in the kitchen, not in the prayer room, all footwear is okay everywhere, only home chappals on the carpet… it’s a jungle out there. I stood there stupidly, waiting to take my cue from the Boyfriend. After waiting for me for a full minute to precede him—ladies first, like he’d been taught—he took my hand and strode right in.

First up was his mother. A five-foot-nothing woman who had to tilt her head upwards to look at us. He engulfed her in a bear hug while I smiled and muttered a weak, “Hello aunty.” In the many hours I had spent Googling ‘first meeting with the boyfriend’s parents’, men and women with great knowledge of the subject had waxed eloquent about the magnificent beast that is the mother of an Indian son. She is the Devil incarnate, not to be trusted and never to be crossed—at least not until the marriage certificate had been signed, sealed and delivered. Since marriage wasn’t on the agenda, I was certain she wasn’t locking up the family solitaires in panic just yet. But I’d never met a woman who looked more petrified than the Boyfriend’s mother did at that moment. His father had patted me on the head by way of greeting, smiled broadly and proceeded to discuss Sachin’s retirement with his son, leaving the two of us to make our own conversation. Like I said, men are horrible, mean creatures.

“You are tall,” she said finally. I smiled and nodded in agreement. “I get it from my grandfather,” I told her. “Then why do you wear heels?” For one second, I was reminded of all the things her son had made me do in those heels. I wondered what would happen if I told her grinning at the direction of my thoughts.

“He likes heels. And tall women,” she said thoughtfully. That wiped the grin right off my face. No woman likes to think she falls neatly within her boyfriend’s ‘type’. I’m no exception. I wondered what was really going on here. Was this just an honest, albeit tactless, admission? Or was it a subtle put-down, her way of letting me know that I shouldn’t get too comfortable in her son’s life? Or had my frantic research made me paranoid?

A friend had offered the most sensible piece of meet-the-parents advice. “Even if she likes you, she’s bound to feel a little shortchanged. If you’re good for her son, she gets no credit. If you’re bad, you’re the evil wench who caused her/him pain. Plus, the Hindu-Muslim angle, dude.” I remembered my friend’s wise words and decided to try harder. Her attitude warmed substantially when I told her I’d interviewed Sushmita Sen a few years ago. A half hour later, as Kaaki was serving us lunch, she suddenly announced, “You will have tall kids,” and smiled broadly, obviously pleased with her ingenious way of letting us know we had her blessings.‘What’s this pair’s obsession with height?’ I remember wondering as I stared, shell-shocked, from mother to son. Marriage? Kids? Had I missed some very important memo?