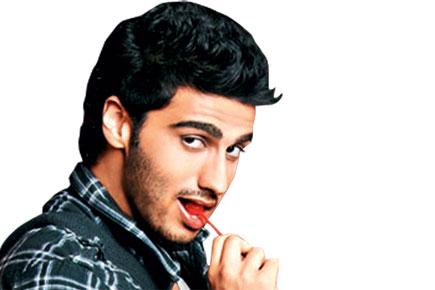 
Given Salman Khan and his propensity for mischief, it’s hardly any surprise that the actor convinced producer Boney Kapoor’s son Arjun Kapoor—at the time an assistant director and weighing all of 140 kg—that he could be an actor. Six years later, Arjun is making his acting debut in Ishaqzaade, and he can’t stop thanking Salman enough for showing him the right direction.

Arjun, who tagged along with Salman for all his outdoor shoots and took workout tips from the Dabangg star very seriously, has joked that he was “so big” when he first hit the gym that the needle on the weighing scale did a full 360-degree spin when he climbed on. Seeing this, Salman reportedly instructed his entourage to starve the boy for three days before even allowing him into the gym again.

He’s not the most easily likeable person in Bollywood. Sure, he delivers hit films consistently, but Sajid Khan is usually brash and cocky, and insists that he’s smarter than most other filmwallas. When John Abraham signed up to star in Housefull 2, most people who knew him were surprised, given that the actor had previously complained that he was turned off by the director’s abrasive behaviour towards him. Story goes that on more than one occasion in the past, Sajid had accosted John at parties and told him that there was only one way for the actor to end his unlucky streak at the box-office, and that was by working with him.

John had reportedly confided in friends that he was turned off by Sajid’s rude approach, and didn’t sign either Heyy Babyy or Housefull, both of which the director had apparently offered him. But a little over a year ago, when his career looked like it was rapidly going south and there appeared to be no hope in sight, John swallowed his pride and joined the cast of Housefull 2. With the film now having done big box-office business, John has reason to smile. And Sajid reportedly can’t wipe the I-told-you-so look off his face.

But it’s not just John. It’s no secret that Ajay Devgn was no fan of Sajid’s either. The director had allegedly cheesed off the action star with similar declarations of taking his career to unknown heights if he worked with him. And Devgn, not known to suffer fools, is believed to have openly shown his contempt for the director, using the most colourful language to describe him each time someone brought up his name.

Yet, Devgn will now star in Sajid’s Himmatwala remake for producer Vashu Bhagnani. Word on the street is that the actor’s been paid a fat packet to do the film, and also that he was seeking another blockbuster collaboration urgently, since his Golmaal director Rohit Shetty is off to work with none other than Shah Rukh Khan.

The Horror of Common Names

Few actresses would be foolish enough to send birthday greetings to a famously pissed-off wife of an actor she’s having a rip-roaring affair with. But as it turns out, that’s exactly what one leading heroine did a few years ago, albeit inadvertently.

In her enthusiasm to wish a producer-friend’s younger sister (who happens to share the same name as her then actor-boyfriend’s wife), this actress reportedly sent a mobile text message to a friend asking for the birthday girl’s number. Misunderstanding whose number she was being asked for, the friend in return sent the actor’s wife’s number, puzzled as hell why the actress would ask for the wife’s number but too embarrassed to enquire. The actress then apparently dashed off a friendly birthday greeting, thinking she was sending it to her producer-friend’s sister. When she didn’t receive a reply even until a few days later, she decided to find out if she had the correct number.

Which is when she realised the horror of what she’d done. To make matters worse, she learnt that it was in fact the actor’s wife’s birthday only a few days later.

The actor’s wife didn’t respond. You wouldn’t believe where she was at the time—on a luxury cruise with her husband, enjoying a private holiday. It’s a miracle the husband wasn’t thrown overboard after that message landed in the wife’s mobile inbox.