Discovery of a Cult

Have you heard of someone called S Sukhdev? It’s about time you did 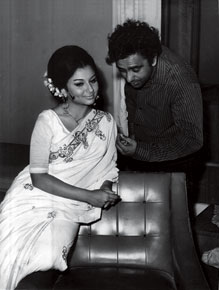 Have you heard of someone called S Sukhdev? It’s about time you did

I start my day at the International Film Festival of India (IFFI) in Goa browsing through DVDs of films by a director called S Sukhdev at the Films Division (FD) stall. Few hours later, someone tells me about The Last Adieu, a documentary on Sukhdev made by his daughter Shabnam, playing in the Indian Panorama section. Later that evening, I am right behind Gulzar at a panel discussion when a film critic friend wonders if I’ve seen Ek Akar, Gulzar’s documentary film on Sukhdev. The same night at a party I bump into Shabnam Sukhdev who asks me to definitely check out her documentary

Now come on, these are signs, even if you’re not a believer. I had never heard of Sukhdev before this. I’m probably being led to rediscover a forgotten cult for myself. I’ve been bingeing on his films over the past week. Societies sometimes go through this phenomenon. Malcolm Gladwell calls it the ‘tipping point’. Writer Saadat Hasan Manto’s works, I’m told, had hit upon a similar tipping point in the 80s—being translated and accessed anew—although Manto had died in 1955. During the 60s and 70s, Sukhdev had directed 60 films, including docs, features, shorts and ads. He’s supposedly found a unique voice with And Miles To Go… (1965), dubbed as ‘India’s first angry documentary.’ Of those that I have seen, at least two—India 67 and Nine Months To Freedom— have been rightly heralded as masterpieces.

India 67 is a series of montage shots, stills, audio clips, poetry, ambient sound and background score detailing a day in the life of India in 1967 (20 years after Independence). Without any definitive commentary, it visually captures the poverty and the riches, and even the rise of Bal Thackeray. The film serves as both an important social artefact and a hugely ambitious art installation. Gulzar’s tribute Ek Akar is a mash-up just like India 67, as if detailing a day in the life of Sukhdev. Nine Months To Freedom is a much more polished but a terrifying one on 10 million East Pakistanis fleeing to seek refuge in India before the birth of Bangladesh. The film, showing the lead-up to the 1971 Indo- Pak war, carries priceless archival footage, besides some of the most gruesome images of death that I’ve ever seen. Nine Months To Freedom was possibly the first Indian documentary to get a mainstream release in major theatres. Given the picture’s part-propagandist treatment, Prime Minister Indira Gandhi had become quite a fan of Sukhdev (he called her “Indu baby”). Some of Sukhdev’s films thereafter—Voice Of the People (1975), Thunder Of Freedom (1976)—are seen as pro-Emergency, or at any rate, pro-Indira.

This can be debated. What can’t is Sukhdev’s masterful camera work and his rugged visual style. Brave and impulsive to a fault, he could risk it all, even duck bullets, to capture the perfect footage. Stylistically, close-up of objects—insects or human faces—taking up an entire frame hadn’t been seen in documentaries until Sukhdev. The guerrilla-style, self-taught filmmaker Sukhdev in his time would traverse through rough terrains across India holding heavy 16 or 35 mm Arriflex cameras on his rock-like shoulders. Through Shabnam’s documentary The Last Adieu, we discover Sukhdev, the person and the filmmaker, and at the same time Shabnam herself. The film is partly a lament by a neglected, estranged daughter for her late, strikingly handsome, rebellious father who used to be totally consumed by his passion for friends, fast cars, whisky, and work. He had no business getting married or raising a child. He was also a lonely and depressed artiste. Shyam Benegal calls him a “one man army”, which, he says, is one of the reasons Sukhdev couldn’t succeed in feature films. Both his features, My Love (starring Shashi Kapoor and Sharmila Tagore) and Reshma Aur Shera (with Sunil Dutt in the lead and Amitabh Bachchan in a small role) were unremarkable.

Going back to my IFFI-Goa story: The next evening at the festival, I find filmmaker Sudhir Mishra telling me about how Sukhdev had one day offered him a two-film deal as a lead actor. Understandably excited, Mishra had gone out that night to celebrate a rather unexpected turn in his career. In the morning he woke up groggy with his flatmate throwing the newspaper at his face. It said Sukhdev was no more. He had died. It was 1979, and he was just 45.