Dholavira: Bricks of our Ancestors 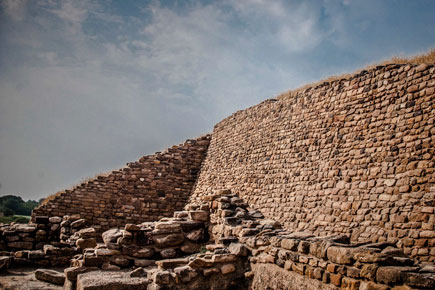 After meandering through generic landscapes for almost an hour, the bus suddenly found itself in front of a pristine white expanse. The Great Rann of Kutch was shining brightly. It was February but the heat was already overwhelming in the salt desert. The smooth road got smoother as it set the desert asunder and even the rickety, geriatric bus found a new lease of life in the absence of any competing traffic.

This road eventually led to Khadir, a large desert ‘island’ inside the Rann which supports diverse vegetation types including mixed scrub thorn and savannah. It is more of an oasis in the midst of the salt desert. My destination of course was Dholavira, one of the largest Harappan—also called Indus Valley—Civilisationsites on the Indian side of the Radcliffe line.

Dholavira is a small village inside Khadir that probably would have remained desolated and forgotten if not for some vital excavation in the 1960s that showed that the area had a much more glorious past. Apart from the famed ruins, it is still a small village with dusty roads ruled by herds of cattle and where bullock carts are easier to locate than automobiles. Only a handful of buses ply to this village every day. It is possible to reach here after dark but there is no way to come out of the village in the afternoon unless you have your own vehicle. The last bus coming out of Dholavira leaves at around 12.30 pm.

It was evening by the time found the Toran Tourist Complex, the only option for food and lodging at Dholavira. The manager advised us to get up early in the morning for a good view of the ruins. We got a nice cottage for us at very minimal rates. However, the water was salty, and while the phone worked, there was no internet connectivity. Anyways, peacocks, Indian rollers, egrets and many other birds provided enough distraction for us till it got dark. In fact we were surprised to see so many birds in such a barren location. Dinner was very basic but there was no other option.

In the morning we set out early but somehow lost our way in the bushes while attempting to find a short cut. Eventually we arrived at the ruins, not from the front entrance but from the rear side. It did not matter, though, as there is no charge for visitors. The first things we noticed were the canals. Our schoolbooks mentioned that the drainage in Harappa was way ahead of what we have today in India. We finally got proof of the same as we walked through the robustly built canals, which seemed laid out in a way that would allow sewage to flow out of the city. Now they are abandoned and covered with thick, thorny shrubs. But we did notice many local villagers on my way. Who are these people? Are they the direct descendants of those who built these? In that case, why are they not building them again?

We did not have the answer to any of these questions, but then no one else has them either. So we accepted the fact that we’ll probably never get to know the whole story and moved on. Green bee-eaters and doves flew out of the thorny bushes as we climbed upwards to reach higher areas of the ruins and finally reached the section that has been called ‘The Bailey’ by the experts. It was probably meant for the citizens of the city while the ruling classes lived in the fortified citadel which was higher up.

On top of the bailey, there were some circular formations with erect centres. Many experts have considered these to be sacrificial altars. In a way, they look like a primitive version of Shiva Lingas (phallic representations of Lord Shiva that arestill prevalent in India). But apparently this is another thing that we will never be sure about. However, if there was something that we could be sure of, it’s the architectural prowess of those people. The 4,000-year-old bricks here are sturdier than anything available today. Surely a lot of it has been destroyed but some parts of the pillars and walls still look as good as new.
The geometric perfection of the Harappan Civilisation is visible throughout these ruins. Everything has been built in perfect shapes although the purpose of some of these structures is unclear. The maps suggest that the entire city was shaped like a parallelogram, while smaller compartments were shaped as squares or rectangles. There were a few staircases going underground but the entries were blocked with iron grids. Probably they lead to sections that are still awaiting excavation.

We’d started very early in the morning and the weather was a bit gloomy. But when we reached the top of the citadel, the sun was out and the ancient bricks were glowing with a golden hue. Finally, we came across a large empty reservoir. It was probably a water tank or a great public bath. It is huge rectangular construction with several flights of stairs leading to the bottom. A common feature of most Harappan sites, this also looked like a predecessor of all the medieval step wells that can be found all over India.

We walked out of the ruin and finally found the front entrance. Only a few people were present, mostly employees of the museum. We were pleasantly surprised by their cooperation because in most of the museums in India there are strict photography restrictions. Here, even before anyone asked, the museum caretaker encouraged us to take photographs. There were several vintage photographs on display, documenting the excavations though several decades. But the most interesting items were the coins and seals with iconic Indus Valley imagery such as the ‘unicorn’ like animal and the yet-to-be deciphered script.

Our little adventure was over by noon. We rushed back to our room and collected our bags. We were worried about getting back to contemporary ‘civilisation’ to catch my train on time. However, the bus turned out to be more punctual than us, as it arrived on time and then left us at our destination without any further hiccups.

Fact File: Where and what is Dholavira?
It is an archaeological site located in the middle of the great salt desert known as Rann of Kutch in Gujarat, the westernmost state of India bordering Pakistan. It houses some vital ruins of the Harappan Civilization which blossomed from 3000 to 2000 BCE. and then decayed miraculously. It combines the mystique of a lost civilisation with the adventure of driving through a pristine, desolated landscape.

Reaching Dholavira
Dholavira must be reached by road but thankfully the roads are extremely smooth till the last point. It is difficult to get any direct buses to the place. The nearest big town is Rapar and from here you can find regular buses to Dholavira. Rapar is well connected with Bhuj, the capital of Kutch region where the salt desert is located. On the other hand, if you are not going all the way to Bhuj, you can reach a train station called Bhachau from Ahmedabad and take a bus to Rapar and so on. If you want to ride a bike or drive your own car, that should also be fine because the road through the desert is straight and well maintained.

Accommodation and Food
Toran Tourist Complex is a government owned lodge here and the only option for food and accommodation. You can call and book in advance.

Best time to travel
Choose the winter months as the heat is oppressive otherwise. December to February should work for everyone.