Confessions of a Flamengo Fanatic 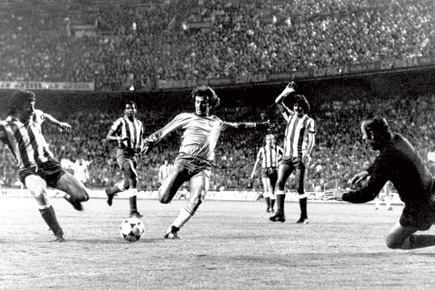 I was born a Flamengo supporter. I had no choice but to support this most popular football club. I was born to a family that lived in Rio de Janeiro; one that traditionally supported this club, which had its origin in the Flamengo area of the city, where my family still lives. From a very young age—when I was a toddler— I was told to love and support the ‘Rubro-Negro’, or the red-and-black team, named so because of its colours. Most Brazilian families belong to one club or another; it’s not like religion but it’s a very important part of our identity. The loyalty to a particular club is passed from parents to their sons and daughters. In my case, being the youngest member of the family, it came to me from my father, mother, elder-brother, sisters, cousins, uncles and aunts.

Of course, I could have become a rebel and supported another club. But I have supported Flamengo with passion, and will support it all my life because I believe in the chant that says: ‘Once a Flamengo, you are Flamengo till you die’.

All Brazilians take their clubs very seriously. We have a different kind of relationship with our clubs and national teams. We love ‘Seleção Brasileira’, our national side, but clubs are part of our thinking, our daily lives. When my niece joined swimming classes at Fluminense—the main rival of Flamengo—my whole family asked my sister to change the club because there was a big risk of the little girl becoming a Fluminense supporter. My sister followed the advice. Isadora belongs to a new generation which is not very fond of football. But, at least, she doesn’t support Fluminense.

For Brazilians, our clubs are not just football teams. They are more than that. All the clubs in Rio, Sao Paulo and the other cities were born in different communities. Most of these clubs are still based in those communities and most of the players come from the neighbourhoods where the clubs are located. Unlike English clubs, which depend on imported players, Brazilian clubs have been part of communities so much so that many of the Samba schools of Rio were actually born in football clubs. It was logical: dancing samba and playing football are part of our culture and identity.

Families will do anything to maintain this identity. Our family faced a big test when my cousin, Bernardo, a Flamengo fanatic, got married to Angela, whose father had been president of Fluminense FC. Everyone was happy with the marriage as their love was very strong, but when it came to putting Andr´e, his11-year-old son into a football club for training, my cousin didn’t give in to pressure from his father-in-law, and sent the boy to Flamengo football school.

My family is not an exception; we are a very regular Brazilian family. Almost all Brazilian families have similar stories of loyalty to football clubs, and Brazilian children are taught to learn and love football at a very early stage. I remember the Sundays from my childhood. Sunday was always football day. In the afternoon the whole family would sit around the radio and listen to football commentary, with the narrator speaking incredibly fast and shouting “gooooooooal” when a team scored. When Flamengo scored goals and won matches, we would all party hard. Even today, our Sundays are reserved for football and beer, especially if Flamengo is playing.

When I was just eight years old, my family shifted to Sao Paulo. The early 1980s were the era of Zico, the great Brazilian footballer who played for Flamengo. He was my hero, and I thought all Brazilians loved him too; but when I started living in Sao Paulo, I realised that Paulistas (as people from Sao Paulo are called) saw Zico as a Carioca (as Rio residents are called) hero. In Sao Paulo, Paulistas had their own football heroes. In my school, there was another Carioca, a boy who was also a Flamengo supporter. In a school full of supporters of Paulista clubs like Palmeires, Sao Paulo FC and Corinthian, we two had to fight hard to defend our hero Zico.

Even after we moved away from Rio, my family continued to support Flamengo. I would religiously cut articles about Flamengo and Zico and paste them in scrapbooks that I kept. I had dozens of scrapbooks which I kept like football diaries. My elder brother Valeriano would draw the design of a football field in the notebooks and teach me the rules and moves of football so that I could understand the game better.

By the age of 15, I was back in Rio and my football craze was at its peak. Inspired by Zico, I used to play football in school. Like my hero, I played as a striker. It was also at that age that I went to the Maracanã to watch a Flamengo game. It was the final match of the national championship. My brother took me and my cousin Miriam, two years younger than me, to the iconic stadium. It was our first time in a stadium and we were a little nervous among the crowd of mostly men in red-and-black T-shirts, wildly singing “Mengão!” (a nickname for the team). We were also nervous because my cousins teased my brother as ‘Pé Frio’ (cold feet), a term used for people who bring bad luck to the team; but that day—our first time seeing Flamengo and Zico live—our club won the game and championship. We were so happy.

I have always been a proud Flamenguista. I have also been very good at converting people to become Flamenguista. I converted Miriam and her younger sister Luciana to Flamengo even though their father Samuel, my uncle, was a Fluminense supporter. Fortunately, Miriam got married to a very committed ‘Flamenguista’.

It was my love for Flamengo that got me interested in the Brazilian team because Zico was the main striker for the national side as well. My first memory of a World Cup is that of 1982, when the ‘Seleção Canarinho’ (a nickname for the Brazilian team) had so many stars like Zico and Junior from Flamengo. Before the World Cup, Junior had composed a special samba—Fly Canarinho (Fly Canary)—and we all knew it by heart.

The 1982 World Cup was also important for Brazil as it took place at a time of re-democratisation, after military dictators had grabbed power in 1964. With a wonderful team, we were sure of Brazil becoming the champion for the fourth time; but we lost to Italy. We were all shattered. Immediately after the game, I was down with high fever. All the streets in Rio were empty and silent. Even adults were crying like children.

As I had never seen Brazil winning the World Cup and had only heard stories about the third victory in 1970, I desperately wanted Brazil to win in 1982. But when such a great team lost, I was afraid that I might never see Brazil as the World Champion. But that moment came in 1994. It was a pity that I was not in Brazil that year. I was living in Moscow, but I was invited to a party organised by a Brazilian, the son of an old communist, and I saw Roberto Baggio missing the penalty and Brazil becoming the World Champion for the fourth time.

In 2002, when Brazil became the champion for the fifth time, I was already working as a journalist in Sao Paulo. Though the tournament was played in Japan, we enjoyed every moment of it. Now, 12 years later, as the World Cup comes home, we are all hoping and wishing that Brazil can become ‘Hexacampeão’, six-time champions—and that, at the Maracanã.

In Brazil these days, the mantra is ‘We are all one’. And we all have one dream: to be World Cup champions, once again.

Florencia Costa
Florencia Costa is a foreign affairs columnist for Brasil Economico. Based in India from 2006 to 2012, she covered South Asia for O Globo. Her best-selling book Os Indianos was released in 2012