Can I Lie on My Passport Form Too?

Devyani Khobragade was arrested in the US for lying on her visa application form; maybe that’s a privilege all Indians should claim 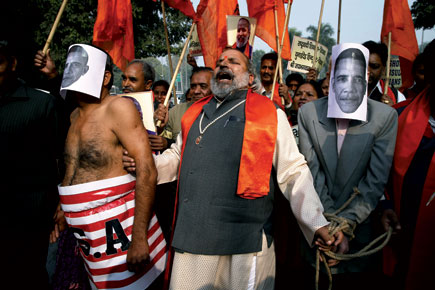 Devyani Khobragade was arrested in the US for lying on her visa application form; maybe that’s a privilege all Indians should claim

There is a certain joy in seeing someone stand up to a bully; that is evident in the glee with which the Indian Government’s retaliatory moves against the United States have been greeted.

In the popular imagination, this is the case: the US arrested and humiliated Devyani Khobragade, a diplomat unfairly obliged by US laws to pay her maid even more than she herself earned. And therefore it is in the fitness of things that we should scare American diplomats by removing the barricades outside their embassy in Delhi, revoke ID cards and special passes, stop their alcohol imports and get details about what they pay their domestic staff so we can expose their double standards. These are all privileges that US diplomats enjoy here. And by the principle of reciprocity, we are entitled to treat them just as they have treated us.

There is only one small issue: Khobragade has been arrested not just because she didn’t pay her maid the minimum wage stipulated by the state of New York, but because she wrote in her visa form that she was paying it. She lied deliberately and there is no getting around it. Does that merit a strip search and sharing a cell with drug addicts and sex workers? Maybe not. But to get to that point, we have to first accept that a representative of India committed a crime of visa fraud purely for the luxury of having a servant.

It is curious that we are not willing to admit that. Our position is that a) the poor woman paid her maid what she could afford; b) it is alright that she put in a small lie in a visa form because it’s just paperwork; and c) she cannot be arrested for it because she enjoys diplomatic immunity.

But diplomatic immunity comes with the caveat that if a crime is committed, the accused diplomat’s home country will address it. India’s position so far has been that she should not face any consequences whatsoever. And if that is true, then the External Affairs Ministry, for which Khobragade works, has no moral right to take action when an ordinary Indian lies on a passport form. But they do take action, and we have an entire Passport Act as a basis for it. You can be jailed for up to two years for lying in a passport application.

It was extraordinary to hear a former ambassador on television say that what Khobragade did was not unusual and that all diplomats take a maid or a nanny along when they are posted in the US. So why don’t ordinary Indians do that? Because they can’t afford it. Why can’t they afford it? Because there are minimum wage laws in the US. And unlike, say, India’s child labour laws, which are flouted on every street corner, those laws are enforced. In effect, all these diplomats have been enjoying a privilege that arises from the poverty in India by circumventing US laws through diplomatic immunity. They have managed to ‘adjust’.

It is this same ‘adjusting’ on display as privileges are revoked for Americans here. Someone needs to answer why they were granted those privileges in the first place if they were not given to us in the US. Where was ‘reciprocity’ then? Did we just make an informal policy: ‘Our Consul staff can live without special IDs but the poor Americans coming to this wretched country deserved better’?

We should also keep in mind that Manmohan Singh, the most silent of politicians, was at his loudest, even willing to gamble his government, while pushing for the Nuclear Deal, just to make the US happy. It is a little too late to suddenly realise the object of your adulation is a bully just because he is serious about the idea of law.