Call of the Red Planet

On the sudden explosion of interest in Mars 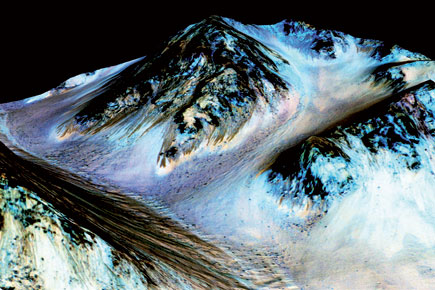 A couple of years ago, I spoke to a bunch of Indians who were willing to go on a one-way ride to Mars. An organisation called Mars One was planning to send a manned mission to the planet and had solicited requests from people all over the world who wanted to be on board the flight. The process of selecting these men would involve a reality show and the proceeds from that would fund the journey, slated for 2022.

Those I spoke to had volunteered and been long-listed. They ranged from a student to an organiser of a short film festival. One government employee had just grown fed up with earth because he had not been able to purchase a flat of his own so far. On his wife’s face I could see benign certainty that her husband would forever remain a captive of earth and his ambition was just one of those idiosyncrasies married people have to endure. I remembered them as I watched The Martian, a movie about an astronaut who is inadvertently left behind during a space mission and is the only inhabitant of that planet.

Mars One sees itself as a project that colonises the planet. It is a surreal plan and many in the scientific community don’t take it seriously. If it does happen despite all the odds and ridicule, then it will say something about human civilisation that it needed a television show to fund a planetary exploration. One of the reasons an NGO got into it is that space agencies run by governments are not interested in manned flights. That is because getting an astronaut to Mars is relatively easy, but getting him back is just too difficult at present. You will need a launch pad on the planet and you simply cannot build one there with the current technology and resources.

But it is possible to go there and, like how the character of Matt Damon does in the movie, build a viable habitat with supplies frequently arriving from earth.

Besides Mars One, there is another man who is planning to colonise the planet and the world is taking him seriously because he has a certain pedigree. The billionaire Elon Musk is more famous for Tesla electric cars, which are as fast and powerful as regular fuel-guzzling carbon-emitting earth-destroying automobiles, but his most ambitious project is a Mars Colonial Transporter that his company SpaceX is building. They have already transported supplies to the International Space Station, so it is not a billionaire’s idle whim. Space travel has actually started for them.

Man’s imagination goes before him and ever since it was confirmed that water is present on Mars, the idea of stepping onto another planet has jumped from a vague possibility to a pressing ambition. But is there a point to such a colonisation? Probably not. We wanted to get on the moon, but then got bored with it because there was little to do there. Mars could likely be the same.

Science fiction writers who imagined space exploration as an enterprise aimed at mining other planets for resources got it relatively right. That is a sustainable motive, but we are perhaps centuries away from it. The fascination with being able to go only lasts a generation.