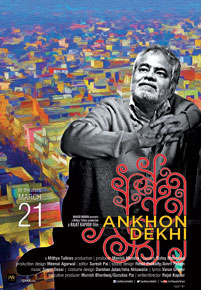 I am sorry, but crowdfunding, a popular term in film financing lately, is just a more civilised word for beggary. Of course, there is charity involved. But so far as noble causes go, passing on my hard-earned money to a filmmaker would figure far lower than flood victims of Kashmir. And yet, that is the only way some films can get made.

The Free Market is less likely to support pictures without massive budgets and a vast landscape with a handsome hero at the centre of it all. Those with more realistic artistic ambitions could bank on the generosity of film buffs looking only for their name on the credit roll in return.

The first crowdfunded Indian film I can remember was Raghu Romeo, about a restaurant waiter (Vijay Raaz) deeply in love with a TV soap character (Maria Goretti). This was around 2002, much before Facebook, Twitter, Kickstarter and other avenues to make an appeal for public donations. The film’s writer-director, Rajat Kapoor, an FTII graduate, had sent out a mass email with the film’s synopsis. Many replied with the promise of a cheque. This is how Rajat, best known then as Preity Zinta’s uncle from Dil Chahta Hai, pulled off his first theatrical release; and Raghu Romeo picked up a National Award in 2004.

Subsequently, Rajat Kapoor directed few similarly entertaining features— minimalist in approach, quirky in tone. Mixed Doubles (2006) touched upon spouse-swapping. Mithya (2008) was a wacky adaptation of Chandra Barot’s Don (1978). Working on the industry’s periphery, he also attracted a band of loyalist actors. Ranvir Shorey, Vinay Pathak and Saurabh Shukla were among his regulars. It was almost like a drama company that had spawned something of a sub-genre of its own. None of those films were masterpieces. But given the nature of the film business, they also didn’t get noticed much.

A football quote I once read goes, ‘You have to be at the right place at the right time all the time. Sometimes, the ball comes to you.’ Rajat Kapoor surpassed all expectations, finally scoring a goal this year with his film Ankhon Dekhi. The film is dedicated to his mentor-directors Kumar Shahani and Mani Kaul. One of the movies Rajat Kapoor told me he was inspired by was Basu Chatterjee’s directorial debut Saara Akash (1969), which incidentally also had Mani Kaul in the cast. Saara Akash, an early Indian ‘new wave’ film, was based on Rajendra Yadav’s debut novel. It’s an avowedly anti- marriage movie and a fine social artefact of the late 60s India.

It’s hard to tell the connection between Ankhon Dekhi and Saara Akash, apart from the fact that they both look closely at a lower middle-class joint family and the old-world family values that define them. The way Rajat Kapoor brings to life the charm of Chandni Chowk in Delhi, you can tell, he has filmed what he knows best. It is a thoroughly amusing movie that moves you with its lead character Bauji, an old man who wakes up one morning to swear that he will henceforth only believe in facts that he has verified with his own eyes. The film uses music (by Sagar Desai) and cameos of street life exquisitely to tell its story. Over time, ironically, Bauji develops a fan following that reposes its blind faith in his beliefs instead. The film questions the basis of sycophancy, opinion, gossip, religion, journalism, and to a fair extent, what we know of life itself.

If there were proper (rather than popular) awards for Hindi films, Sanjay Mishra (Bauji) would be forerunner for the best actor’s trophy, as would Seema Pahwa (Bauji’s wife). I watched the film recently with students of Mumbai’s St Xavier’s College before a panel discussion with the director. It was heartening to sense how the movie had enthused a young crowd that we often assume prefers lowbrow entertainment. Many of them expressed misgivings about the film’s ending, by which they meant the last scene, rather than its second half. What surprised me is they hadn’t heard of Ankhon Dekhi before this, although it had released in regular theatres. Its DVD has only just come out.

I’ve seen the film thrice. The last movie that made me go back to it was Anand Gandhi’s profoundly lyrical Ship of Theseus (SoT), the best film of 2013 to my mind. Incidentally, SoT was produced by one of its actors (Sohum Shah), a real estate developer from Sri Ganganagar in Rajasthan. For those who don’t take spam in their inbox seriously, Ankhon Dekhi was sponsored by a film buff and businessman from Nigeria (Manish Mundhra) who got in touch with Rajat Kapoor over Twitter.