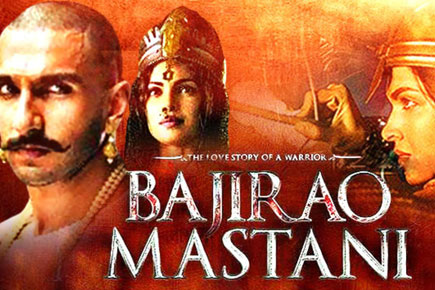 Among the questions raised about the historical veracity of Bajirao Mastani, a movie that has just released, is also one on how a woman who’s had a lifelong limp can dance. The movie is based on the romance between Peshwa Bajirao 1 and his second wife Mastani. The dance sequence features her and his first wife Kashibai, who her descendants claim couldn’t have done it because arthritis and tuberculosis had left her with a limp. An interesting point, no doubt, but for the fact that if Sanjay Leela Bhansali had been true to the real story, or even to the mythologised version that gets passed down about Indian rulers, then this movie would never get released.

The true story would show the Marathas as raiders extorting money from rulers across India under the threat of pillage. It does not mean that they were bandits because in that age that is how kingdoms were carved out. In Bajirao’s case, he was capable enough to launch the Maratha empire, and empires have violent slaughterous beginnings. Surat was once the main harbour for India’s external trade and Shivaji’s raids on it contributed to effacing it. Bajirao himself ransacked Delhi’s surroundings to force the Mughal emperor to confer legal status on the money he wanted to extort from north India. Unlike wars, such acts target civilian populations. Once he got the emperor to comply, what he was demanding became legitimate tax.

Rarely do filmmakers anywhere in the world remain completely true to life in a biopic. Recently, a Hollywood movie called Legend on the Kray twins, underworld kingpins of London in the 1960s, showed one of the brothers as homosexual and the other firmly heterosexual. In reality, the ‘straight’ Kray was actually bisexual. They needed to slip in a love story without sexual orientation confusing it. That gets more empathy from a general audience, a necessary condition for a movie to sell. A Beautiful Mind, on the mathematician John Nash, showed him rationalising his way out of schizophrenia. The book on which it was based was less melodramatic—the ailment became just slightly mellower with age. Richard Attenborough’s Gandhi didn’t show him sleeping nude with young women to test his will power and celibacy.

Depicting a real Bajirao or Mastani is not the filmmaker’s job. He is responsible for an engaging product and that usually needs exaggeration. But without letting the film become completely artificial.

It’s often a fine line. A forthcoming biopic that will test this line is the one based on Sanjay Dutt’s life being directed by Rajkumar Hirani. To make one on a living person is strange. Dutt’s is a life full of self-made tribulations but there is really nothing of any remembrance, real heroism or redemption that he has done. Hirani will have to take liberties, edit out and insert episodes. He is a decent enough director to not make it a cringing hagiography. It will still be propaganda but if he can keep it entertaining, then it might still work.