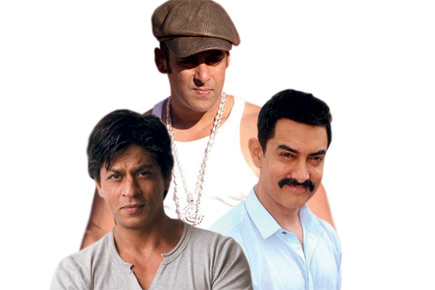 
Malaika Arora and her brother-in-law, actor-director Sohail Khan, attended the same event at Vie Lounge in Mumbai on Monday evening, but neither was keen to greet the other. The event, hosted by the British High Commission, saw a smattering of film folk—Vidhu Vinod Chopra, Rajkumar Hirani, Sharman Joshi, Riya and Raima Sen—turn up and pose for pictures, but Malaika and Sohail, both of whom came separately and solo, were in no mood to exchange pleasantries.

Sohail reportedly snuck into the inner lounge area of the venue when he was informed that his model sister-in-law had arrived. And Malaika, once told that Sohail was inside, consciously avoided leaving her spot in the outer seating area. They finally came face-to-face at the end of the evening when both turned up at the gate to be picked up by their chauffeurs, their noses buried deep in their respective cellphones. Sohail muttered “Hi” after it became impossible to ignore her, and Malaika returned the greeting grudgingly.  But both vehemently refused to be photographed together by the waiting lensmen. Finally, Sohail rustled up a few friends and allowed a few group photos.

There has been consistent chatter among ladies-who-lunch that the Khans have never quite warmed up to Malaika, despite the fact that she’s been married to Arbaaz for over a decade now. It isn’t just Sohail, apparently even eldest brother Salman has an awkward relationship with his sister-in-law.

With Aamir, Salman and Shah Rukh Khan signed up to star in a project each for the company, Yash Raj Films has a promising slate that rivals must surely envy. But the production house is reportedly investing big bucks to keep the three superstars on its roster. There’s some buzz among producers that Yash Raj Films has committed to pay Salman Khan Rs 40 crore for starring in director Kabir Khan’s Ek Tha Tiger, in addition to which the star will also receive a healthy share of back-end profits.

Aamir Khan, meanwhile, who will begin filming Dhoom 3 for the Yash Raj banner in 2012 (but which doesn’t release in cinemas until 2013), is believed to be negotiating an even sweeter deal. According to well-informed sources, a final number has not yet been arrived at, but the actor has allegedly asked for an unprecedented 60 per cent of the film’s net earnings as his acting fee.

Not to be outdone, Shah Rukh Khan—who will star in Yash Chopra’s next, scheduled for a Diwali 2012 release—has reportedly said he feels “awkward” talking money with old friends. He is believed to have told his Dilwale Dulhania Le Jayenge producer Aditya Chopra that he won’t haggle over numbers, but expects to be paid exactly Rs 1 crore more than what the company is paying Aamir for Dhoom 3.

Close friends of the actor reveal that Shah Rukh has been feeling slighted by the banner. Despite having consistently delivered blockbusters for it (DDLJ, Dil To Paagal Hai, Mohabbatein, Veer-Zaara, Chak De India!, Rab Ne Bana Di Jodi), the actor had “quietly accepted” whatever “humble remuneration” the company paid him over the years (he has gone on record to say he was paid only Rs 3 crore for starring in Chak De India!). And it appears he might still not have made a big deal about it if they didn’t seem so eager to roll out the red carpet for Aamir and Salman. “For too long he hasn’t complained about being taken for granted by the Chopras. This time he wants to be treated fairly,” says a source close to SRK

One of Bollywood’s hottest female stars, who’s been single the past year after breaking up with her long-term boyfriend, recently found out that the latter had been secretly seeing his current girlfriend while they were still a couple. Her actor ex, who cultivated the image of a committed partner while they were together, was always rumoured to have been playing the field discreetly. But she only recently found out he’d been double-dating the last few months they were together. She’s believed to have told friends that she failed to recognise him fully even though they’d been together so many years. While she has publicly wished him all the best with his current girlfriend (a “corporate type”), she’s said to be disgusted that he could take her for a ride without her even suspecting it.