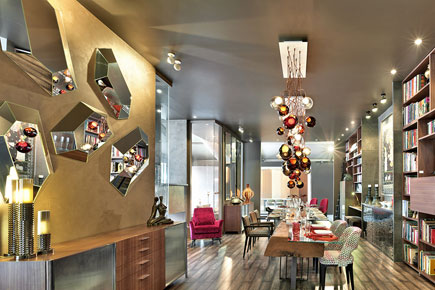 There is something about the way he holds the pen, wrapping his fingers around it delicately, and signs his name. Ever so lightly. Like the shadow of a bird in flight. No hurried movements, no assertion of his self. Just a shadow, a reflection.

Attiq Ahmed writes his name in Urdu, and the curve allows for a lot of space before it merges with the other letters. That’s how he creates. With space, and a desire for peace.

Like the dead butterflies trapped in a gold mesh in a glass box that serves as a table top at his installation at India Design 2015. They look frozen, and yet alive. It is all about contradictions then. Things of beauty preserved in a glass box. For eternity’s sake. Because, he says, design must be timeless.

At the India Design ID 2015, NSIC Grounds, Okhla, the Lahore-based artist Attiq Ahmed of Turning Tables, winner of the Elle Deco International Design Award for Young Designer of the Year, 2015, stands in silence. He doesn’t disturb what’s around, and none of it comes in his way of being. That’s what he does—lets beauty be, and claim its own space. In this yellow and black space, there is a screen that is inspired by paintings in a Lahore historical building, and he uses it as a backdrop. He juxtaposes colours, and materials. The light falls just adequately, and in the right ways. Just to highlight, not to devour things that have been placed.

There is an art of movement, and a secret of taming the elusiveness of time. A lantern in wood is a relic from the past, going on to the future. In its current space, it is at once nostalgic and futuristic. It is like moving on with a sense of the past, and of what can be created with only beauty in mind.

Few artists speak about the work they create. Perhaps not all are so involved. If there is an emotional attachment, the artist would know it, and walk you through the process. It could be a simple sentence. Like what Attiq says about why he does what he does.

“I am a designer whose work is coming out from a dearth of beautiful things,” he says. “The impulse is to find something beautiful, and then the impetus was to manufacture them.”

That yearning served as an inspiration. At 38, he is an interior designer with a unique understanding of space. He works with history, and what is available. Like when he speaks about the “brutalism of concrete” in the design and structure of Avari Hotel in Lahore, and juxtaposes it with the delicacy of Lahore Fort paintings. It is about not getting stuck in a particular moment, he says.

“Do we become nostalgic and recreate and replicate? It is important to learn, and where one can take it. The predominant desire is to create beauty,” he says.

Then he moves away and looks at his installation and says the idea is a box that has just been opened. “It is not a drawing room. It is a box with goodies,” he says. “There are rosewood lamps, and Laaltain lamps, and paintings called Disco Aunty One and Disco Aunty Two by Komail Aijazuddin, an artist who defines his work as encounters.” There is more online by way of explanation. ‘I wanted to show archetypes of Pakistani wives as I have encountered them. The post facelift glam-rock aunty, who no doubt owns a PR firm, the vestal virgin who dresses in white lawn, the seductress, the pouty princess, the literary reader, the paranoid teenager: these are just some of the many grand dames we encounter,’ Ahmed writes on his website.

It goes with what we mean when we speak about shared our heritage and ancestors, and our journeys, Ahmed says.

At the conclave, which aims to showcase and promote design, black and grey walls are everywhere. Attiq Ahmed’s ‘box’ has two in ochre yellow, a colour he associates with happiness, and black, a colour that can make objects jump out. Among the objects, the butterfly table is what he shows first. “It’s something unexpected. They look like they are about to fly off. The wire mesh is an undulating surface, and these are real butterflies that we bought from collectors and rejoined them,” Ahmed says.

There is a white settee. Simple, austere, and basic. Yet, it is elegant in its placement. “I like white,” he says, and smiles. “I am not about vapid consumption. It’s no decoration. It’s not about trends. It is just timeless elegance.” There’s a painting of a woman’s face titled ‘Fair n’ Lovely’ mounted on a lamp. Besides these, there aren’t many objects. The space isn’t cluttered. There’s space for you and me, and that’s what it seems to suggest. And yet, when you walk inside the tent called ‘Decorations’, there’s a sense of unbelonging. It could be anywhere in the world. There are too many colours, and too much jingoism about ‘fusion’, a term that seems to be used often to describe much of the work here.

There is a palace curated by Adil Ahmed of Lucknow, and within its walls hang huge chandeliers, and there are statues, and diwans, and velvet cushions, and crystals, and wallpaper. This is opulence, and that’s a statement in itself. Yellow, gold, and red, and pink. And the shimmer of glass. It is an escape. A memoir of a king or a queen recreated. And in some ways, this is luxury. Indian luxury. No modern shapes here. It is an indulgence of history, and of lives that celebrated wealth and beauty.

Among others, there is Valaya’s concept of design. A red temple-like installation within a glass enclosure, and an ornate table that speaks of a fine finish. Perhaps there is a design churn in progress, and how we look at the spaces we inhabit. Among the many interior designers who have showcased their work, there is a sense of trying to be modern but not letting go of heritage.

These are lifestyles on display. Opulence is the sense one gets here, and in order to stay with the times, a tryst with the modern.

There’s confusion too in terms of articulation. For instance, at the Beyond Design installation that features four living spaces—a bedroom, living room, dining room, and a study—one can see colours at play. Black walls, and grey curtains, and pillars, and beige furniture, and carpets. There is a carved mirror, and this the designers have painted in blue to suggest a shift, a break. The beige and black is broken by an interference of blue. In the bedroom, a blue cushion adds spunk. Then, there is a feather lampshade. These, the designers, say were part of the stuff they collected on their travels. There are Chinese dragons mounted on glass, and there are horse heads, and Rajasthani art on the walls.

Neha Gupta and Sachin Gupta have worked with the concept of fusion, and Neha says it’s all about contrasts because clients want a mix, and of course that could be customised for them. Their signature art is a wall installation of wooden Garudas in grey with blue wings. That, she says, is what they are about—fusion. “There is no design philosophy. We are happy being India,” she says.

It is a decade-old design firm, and specialises in high-end pieces, they say.

There is no missing the bling, but the black and grey and beige tone it down for the sophisticated. There is a purple sofa against a black wall, juxtaposed with a blackish stone table. There are mirrors, and there are crystal chandeliers. Over the stone dining table hangs Greek-looking lamps that the duo have mounted with crystal.

The word ‘fusion’ is used everywhere, thrown around loosely. At the K2 India installation, there’s a finesse to the space with a long dining table made of wood from Borneo, and bookshelves lined with curated books, and art pieces including a Shaligram. Curated by the mother and daughter duo of Sunita Kohli, who was awarded the Padma Shri in 1992 for her restoration work, and Kohelika Kohli, an architect from Pratt Institute in New York, this space is for sophisticates. It is nostalgic, and futuristic. There’s a sense of belonging, and there’s a freedom of travel. Both mother and daughter are avid travellers who respond to varied cultures and design spaces from their interactions with people and sites. “We are deeply rooted, and yet we believe in functional design,” Sunita Kohli says. The space, which they don’t tag as ‘dining’ or ‘living’, is a reflection of who they are, they say.

But beyond such spaces, the point is lost. Mostly between what meets the eye and explanations.

Design is an emotional process. That’s what anchors Ahmed. He is a Sufi, and in that box, you can feel a love of beauty, and his quest for it. Or in the warmth of the space created by the Kohlis, where you can belong, and get a sense of who they are. It’s the personal against the universal, and the merging of the two to create a space that is uniquely one’s own.