About 28 years ago, I learnt one of the most fascinating tales of what military rivalry between India and Pakistan has meant for some families 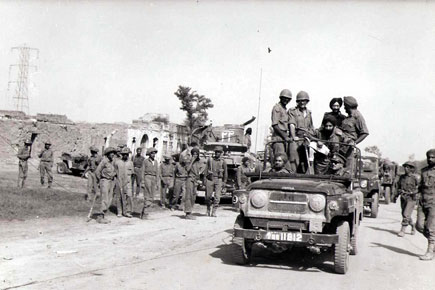 At a dinner party in New Delhi, an elegant gentleman walked up to me and asked if I was serving in the Indian Army. My haircut perhaps gave this away, as I answered in the affirmative (I was then an instructor at the Indian Military Academy, Dehradun). When I enquired if he had any military connections, he replied ‘yes’; his two elder brothers had both been officers. To this, my natural response was, “What were their regiments?” He then said with a sad smile, “Let me tell you a story.”

And this was the story he narrated to me:

Several years earlier, he had run into the Pakistani military attaché, Brigadier Beg, in India at a circuit house (Dak Bungalow) while driving on the Delhi-Ahmedabad highway. Apparently the attaché had upset him earlier in the day with his lack of road manners, and when informed of the same, to make up, the Pakistani Brigadier invited him for a drink. During the course of their conversation, and on learning that his guest (the gentleman who was narrating the incident to me) was an Indian Muslim, the Pakistani Brigadier said to him that it was only in the 1965 war that he learnt that Muslim officers were also serving in the Indian Army.

(The Indian Army’s armoured (tank) units had made substantial gains in fierce battles in the Sialkot sector of Pakistan’s Punjab. Many well known armoured regiments were part of India’s 1st Armoured Division’s thrust lines, such as Poona and Hodson’s Horse, 2nd Lancers, 3rd, 16 and 18 Cavalry. Many thought it was only a matter of time that Sialkot would fall to Indian troops, as Pakistan’s Armoured Division, despite its apparently superior tank units, was in retreat. Pakistan’s commanders desperately needed a tactical break to regain some of the momentum of battle.)

It was at this stage of the war—around 8 September 1965—that the Pakistani Brigadier, then a young Lieutenant, was summoned by his Brigadier Commander. He was asked plan and undertake a commando raid that would take him into Indian frontline positions around Sialkot. His task was to eliminate one or more Indian tank commander(s). This would leave that Indian unit briefly without a commander and give Pakistan that brief window of opportunity to break through India’s formidable frontline.

So this Pakistani officer (then a Lieutenant, now a Brigadier) set about preparing for the raid, to sneak in amongst Indian tanks, during darkness, and kill an Indian tank commander who was giving Pakistani troops a rough battle. So, on 8/9 September before dawn, Lieutenant Beg sneaked into his target area as Indian tanks were preparing for another day’s battle around Sialkot. (In those days, in the absence of night vision devices, tank battles were largely fought during day light). He soon identified a Squadron Commander’s tank, and climbed atop it unnoticed in the loud roar of tank engines as they were warming up for battle.

Peering inside the open cupola, he saw a Major in his radio headset who was poring over his maps, planning for another day’s battle. With no time to lose, Lieutenant Beg shot the Indian Major through the head. But before leaving the wounded Indian officer, Lieutenant Beg decided to take along some proof of having accomplished his mission. He quickly unbuttoned the shoulder flaps of  the Indian Major, and pulled out the cloth epaulets of his ranks from his shoulders. On this was also embroidered ‘16 CAV’, the title of his regiment. And in the breast pocket of the Major, he also found a holy pendant that some Muslims carry on them as a good luck charm. His job done, this young Lieutenant with his raid party then quickly crossed back over into the territory that Pakistani troops were still holding onto, before dawn broke.

Lieutenant Beg then immediately went to see his Brigade Commander, who had sent him on the raid. He met him in the early hours of the morning, where he proudly reported that he had accomplished his mission. His Brigade Commander asked him if he had any proof of it. The young Lieutenant pulled out the epaulettes of the rank badges of the Indian Army Major he had shot, and handed it over to his Brigade commander. Then he suddenly saw the Brigadier become tense. Lieutenant Beg said to the Brigadier that he had possibly killed an Indian Muslim officer, as he handed over the holy pendant he had recovered from the dead Major’s pocket. As an afterthought, he added that he was quite surprised that India’s army also had Muslim officers who were fighting with such commitment and valour against Pakistan.

At that point his Brigade Commander’s hands began to shake and he couldn’t control his emotions any more. His voice became heavy and his eyes filled with tears as he slumped into a chair. Lieutenant Beg asked the Brigadier, with due respect, what the problem was. In a voice choked with emotion, he replied: “Young man, I have just realised from the evidence you have provided that I had tasked you to kill my younger brother.” The Commander kept shaking his head and then went on to add, “I hadn’t the foggiest idea that it was the 16 Cavalry that was directly pitted against us, because Major MAR Sheikh, whom you have just killed, was my younger brother and one of its squadron commanders. And he was their only Muslim officer.” Lieutenant Beg could say little else, as he saluted and took his commander’s leave.

And when Lieutenant Beg finished telling this story to the man who had related it to me, this gentleman told the Pakistani officer, “Brigadier, it may surprise you to know that the two brothers you have spoken about were both older to me… I am the youngest of the three brothers.”

And as the Brigadier stared at him in disbelief, the narrator of this tale requested Brigadier Beg to visit his family home—which was only a few hour’s drive from where they were—to meet his aged mother, who had always wanted to meet someone who had fought against her son! When the Pakistani Brigadier met the old begum the next day (who didn’t know that her son had died of wounds inflicted by the Brigadier), she seemed pleased that the enemy thought well of him!

Records show that Major Sheikh died of wounds in his head sustained in battle near Sialkot on 10 September 1965. He was posthumously awarded the gallantry award of a Vir Chakra. His brother, the Brigadier, rose on to become a General in Pakistan.