He always played bridesmaid to Tendulkar, yet Dravid was also The One 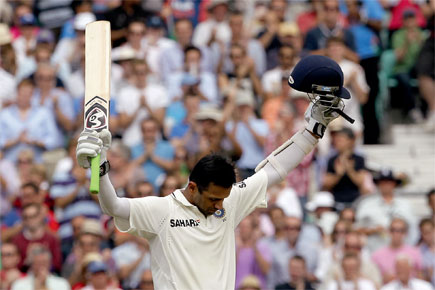 He always played bridesmaid to Tendulkar, yet Dravid was also The One


Getting stuck in an image must be annoying. True, image has roots in reality, but when the reality itself changes, the image often doesn’t catch up. Something of the sort happened with Rahul Dravid, who retired from international and domestic first-class cricket last week.

Dravid’s image was defined by two things. The first was his nickname—The Wall. The second that he was only second-best to Tendulkar.

From a commercial standpoint, the latter bit is valid. In matters of brand endorsements, The Wall was indeed outclassed by The Mall. But from a cricketing perspective, Dravid stepped out of Tendulkar’s shadow a long time ago; let’s date it to the 1999 World Cup, where he finished the tournament’s highest scorer. And let us, please, drop the he-did-not-get-his due lament. It is unfair to a man who himself did not let the situation get to him beyond a point (though occasionally, if a statement had to be made, he’d betray his hurt with an ironic smile). It is unfair to a man who made important records and earned both status and wealth. As he said at his farewell press conference in Bangalore, “I’m happy and comfortable with what I achieved.” Success, money, a brief link-up with an actress, family, to be able to retire before 40… these are things men want and Dravid got them all. We should stop making him look like Sad Sack.

Having worked that off our chests, let’s return to the primary goal of this piece, which is to remind ourselves that not only did Dravid step out of Tendulkar’s shadow many years ago, there were many occasions, several big ones among them, when overshadowee became overshadower.

The 1999 World Cup in England was supposed to be Tendulkar’s canvas. He had been in imperious form the previous edition in 1996, as he’d been that entire decade, but India had lost in the semifinal to Sri Lanka. This time he was expected to take the team all the way. But India had a hopeless tournament. And the man who got the big runs was not Tendulkar but Dravid (461 runs at a strike rate of 85.52, including a 54 and 61 against bowling heavyweights South Africa and Pakistan. Against Glenn McGrath, however, he had no answer.) Just a few years earlier, he had been deemed unworthy of the one-day format. But he worked on his game and adapted. Now he could play copybook strokes along the ground as well as daring aerial ones (the underground drive, where the ball tunnels into the earth after being hit and then surfaces at the boundary, was the only stroke missing from his repertoire).

Dravid’s expansion from a player suitable only for Test journeys to someone who was valuable in both formats was one of the most inspirational things about his career. Because it held a lesson for people in all walks of life—nothing is really beyond anyone as long as you have the discipline to grind it out. It also brought to mind a famous story about the basketball icon Michael Jordan. Once, a journalist wrote, with all due respect, that Jordan was a brilliant offensive player, but surely, it would be difficult for him to win the NBA’s annual Defensive Player of the Year Award. It was a matter-of-fact statement, not a dig. But Jordan being Jordan, took it as one, and the next season, won the Award for best defence.

If you are a certain age, you will remember the paranoia around Y2K. When the bails came off the 1900s and the 2000s took guard, something terrible was supposed to happen to our computers and data systems. It did and it didn’t. But something certainly happened to Tendulkar. For reasons ranging from injury to self-preservation, he cut down his flourish, like a nightclub that suddenly switches the music off and lights on.

Dravid, on the other hand, turned the music on. A less exciting kind of music, but music alright. He proved himself against almost all attacks. Off the field, Dravid often had the expression of a worried man looking for his car in a huge parking lot. But at the crease, with his often pursed lips and elbows out like ‘greater than’ and ‘less than’ signs, he was determined and assured. He was not lost in a parking lot here. His inner sensors knew exactly where everything was—the off stump, the fielders, the gaps.

From 2001 to 2007, Dravid accomplished one feat after another. Either as batsman or captain. Start counting.

One, he co-starred in the Miracle of Eden in 2001, when the land of The Kamasutra experienced a collective Laxmasm. In 2002, he scored a vital 148 at Headingley that enabled India to beat England. A year later came his signature moment as a Test cricketer, when he and Ajit Agarkar won India the Adelaide Test against Australia. It was India’s first win in the country since 1981. Dravid made 233 and 72 not out in the match. In 2004, he scored his personal highest, 270, against Pakistan in Rawalpindi. That 12-hour 20-minute innings probably lasted longer than some Pakistan governments and is the longest an Indian has batted in a Test match. In 2006, he led India to their first Test series win in the West Indies in 35 years. The following year came a triumph of even greater import. Dravid led India to its first Test series win in England since 1986. Somewhere along the way, he also took on wicket-keeping duties in one-day internationals, one of the most draining jobs on a cricket field. You squat for every delivery, dive or run up to the wickets, then go back again. You do this over after over. Television did not do justice to Dravid’s fitness. It only became apparent when you saw him in person. In later years especially, Dravid often looked like a marine, his face tanned, neck thick and strong, and frame without excess fat.

The captaincy point is usually missed in Tendulkar-Dravid comparisons. But it needs to be factored in. Because in some ways it defines both players. Both captained India in 25 Tests and 70-plus one-dayers. But to Tendulkar it was always a headache, and after a point, he didn’t want any of it. Understandable, considering there were all sorts of murky things going on in cricket at the time. By the time Dravid took charge, the match-fixing phase had passed. But he had his own storms, like the loss of trust between Greg Chappell and some of the side’s senior players. However, he had a better team at his disposal than Tendulkar, and led India to more wins (eight wins in Tests and 42 in one-dayers, compared to Tendulkar’s four in Tests and 23 in one-dayers).

The only gripe one has about Dravid—at the risk of getting judgmental—is he could have exuded a little more warmth. He was polite, but not convivial. You couldn’t pat him on the back or be jokey with him. He was the serious type, uncomfortable with anything frivolous, as the famous MTV Bakra episode revealed. During the 2009 IPL in South Africa, I asked him a few questions on the travel aspect of a sportsman’s life. One of them was, “What is scarier? Air pockets or co-passenger gas?” He was stunned, perhaps as much as every time he was clean-bowled (a world record 54 times). He looked down at the floor, scratched his head, wondering whether to be annoyed or amused, and said, “Silly question man. What is it… a fun magazine?”

“Just a fun question,” I said.

A few months later, a colleague who knew him a bit said to me, “I can’t believe you asked him that.”

I don’t know of Tendulkar answering a question on flatulence. There, that’s one more area in which Dravid overshadowed his more feted teammate.