The Story of a Kashmiri Footballer

Basharat Baba was selected to train in Brazil. It was only once his passport was rejected that he learnt his father was a former militant 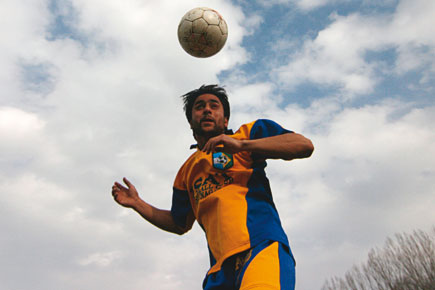 Basharat Baba was selected to train in Brazil. It was only once his passport was rejected that he learnt his father was a former militant


“I am waiting for a letter from my club in Brazil. So if it comes tomorrow, I will leave within a week,” says Basharat Baba, his exuberant smile tinged with the cockiness of an athlete.

Edgily dressed all in black, the 20-year-old could be any young man in modern India. His snazzy sports shoes and mixed-up globalised accent offer no clue of his origins. He is discreet, but I scent girlfriend problems typical of this age. Like many other Indians, this is an enthusiastic youngster: he has painted an entire wall in his room the colours of the Brazilian flag. Dwarfed by the flag, a desktop computer lies in one corner. This is the kind of room I would imagine of a skilled young footballer, one of the most promising of his state and one whose talent offers him a ticket out of Kashmir, out of India, out of Asia.

But we are in Srinagar, where two decades of violence are palpable: paramilitary forces dot the street corners; phiran-clad Kashmiri men submit to frisking and questioning at regular intervals; bunkers and uniforms have taken over portions of some of India’s most famous Mughal Gardens. The armed insurgency may have waned, and Kashmiris insist things have become better. Still, it takes nothing for tensions to flare up again.

Even in Basharat’s Brazilian room, where we sit on the floor in Kashmiri fashion and enjoy traditional hospitality in the form of tea and home-made bread, the conflict has a way of interrupting life. The boy whose passion is football suddenly looks me straight in the eye, as if to answer a question he knows I want to ask, and declares: “And I have never pelted a stone.”

Emotions run high outside the Valley, too. Last October, Arundhati Roy was accused of sedition when she said Kashmir had never been an integral part of India. BJP leaders started hounding the author, some calling for her exile. In response to the BJP’s ‘Kolkata to Kashmir Ekta Yatra’, planned to culminate in a tiranga (Indian tricolour) hoisted at Srinagar’s Lal Chowk, the town was transformed into a garrison, complete with razor wire and additional checkpoints, keeping people like Basharat to their homes.

In this cauldron, Basharat tries to do what, in the words of a mentor, he was born to do—play football. While there appears to be no doubt about his talent, nor about his passion for the game, it’s been a rocky ride: in 2006, he lasted all of a month-and-a-half at India’s finest Mohun Bagan Academy. “I was being avoided by all of them,” he says, “so I just packed my bags and came back.”

Luckily for Basharat, a friend of his told him about Juan Carlos Troia, an Argentinian-born football coach who has set up the International Sports Academy Trust (ISAT) in Srinagar. Basharat, who was only 16 at the time, went along and hasn’t looked back since.

Basharat responded with joy, his parents with only a qualified ‘yes’. The young footballer could not understand why his father thought he would not get a passport, but that is exactly what happened. Six months elapsed. Basharat went to the police to find out about the delay. Frightened by the odd questions asked by officials at the police station, he quickly left.

“They knew that my father was a militant. I didn’t,” Basharat says.

Afraid of being a bad influence, Basharat’s father had not told his sons that he had trained in Pakistan. Although Bashir Baba had given up crossing borders and abandoned arms, he was under interrogation until as recently as 2007. Still, all Basharat and his younger brothers knew of their father was that he was a ‘businessman’. The revelation of his father’s other life, disastrous for his own future prospects, sent Basharat on a rampage: by his own account, he smashed four doors, a dozen odd window panes and the TV set in his father’s house. The scars remain. On my way out of his house, Basharat casually points out a mostly black door. A section of it, repaired, is light brown.

The Blacklist that is holding up some 60,000 passport applications is a fact of life in Kashmir, so much so that activists have launched a campaign for the right to travel. For an ordinary Kashmiri such as Basharat, however, the blacklist meant that his spot went to one of his friends from the ISAT team.

The emotional journey, not just of Basharat yearning for a footballer’s life, but of a young man coming to grips with his father’s secret life, has been sensitively filmed in Inshallah Football, a documentary by Ashvin Kumar. An unexpected appearance in the film is that of Omar Abdullah, whose intervention, after reading a newspaper article on Basharat’s limbo, was crucial in getting the Indian passport that Basharat now happily shows off. The sins of the father should not be visited upon the son, Jammu & Kashmir’s Chief Minister had said.

The relationship between father and son evolves on screen. From an initial stiffness, we see Basharat use the camera to get to know his father. “He was getting all the answers from my interviews,” says Kumar, recalling how many of his questions for Bashir Baba were prompted by Basharat.

The intensity with which Basharat listens to his father talk about night-time forays or the brutal questioning at the hands of the Army is followed by a sequence in which Bashir talks about the secrecy and lies interfering with his sons’ ability to love him. Later in the film, Basharat hugs his father, a hug that starts out as the traditional Eid greeting but ends up as reconciliation. The Oscar-nominated filmmaker’s hopes of  releasing the film theatrically may have been dealt a fatal blow after the Central Board of Film Certification granted the film an ‘A’ certificate.

Although Basharat and Coach Troia have been told that the visa will be a mere formality if an offer letter from the club comes through, the delay of over a year in Basharat’s training is a lifetime in professional sports. While he has been waiting, two of his ISAT colleagues, Musadiq Mehraj and Mir Abdul Hanan, have spent a year training in Brazil and have returned to Kashmir speaking fluent Portuguese. They had what Coach Troia had wanted for Basharat—the experience of being among the first Indians to move out of India for training, to offer their Kashmiri peers the dream of transcending the conflict that bedevils their daily life, and the chance of achieving success as sportsmen.

Basharat, who has also learnt foreign languages in anticipation, continues to wait. Still, his horizon has brightened. In December, he went back to Kolkata with Troia and his teammates, and his experience was quite unlike that of 2006. “They might have thought in their minds that we are terrorists, but every time we spoke to them, they said ‘You are just like us’,” he says with a smile.

That’s what he would like the rest of India to know, that Kashmiris are exactly like other Indians, he says. In parting, Basharat suggests I’d be better off keeping in touch on Facebook. He doesn’t check email all that often, and one doesn’t get text messages in Kashmir.