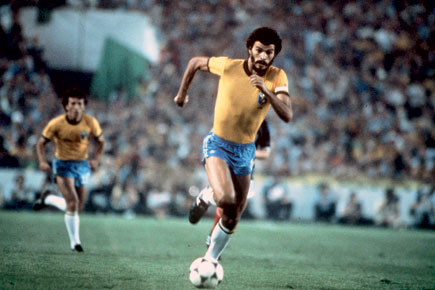 
Socrates wasn’t the world’s greatest footballer. Nor the greatest in the national side he led. He wasn’t even the best midfielder in that team. Zico wore the prized No. 10 jersey, appeared in more games than Socrates, attacked and scored more often. That says less about Socrates, though, and more about the 1982 Brazil side.

Captain of the ‘the greatest team to not win the World Cup’, cried the obituary headlines, followed by paeans to the man’s elegance, his genius, and the samba magic. Then the obligatory counterpoint of the lack of competitive success in his playing years, and then death at 57 (it came on 4 December), hastened by the hamartia of alcoholism and chain-smoking, etching the tragedy in sharp relief.

Socrates wouldn’t have cared for these obituaries. In all likelihood, he would have turned away his face, lit up another cigarette and reached for the next can of beer. The lowest common denominator approach was anathema to him. His club president had to once ask him, after fans complained, to be more demonstrative in celebrating goals. In several statements, he made plain his distaste for the consumption of football like a commodity of entertainment.

Yet this man led a team of great entertainers. The great flaw of that 1982 Brazil squad, we’ve read, was that it did not have organisation in defence, nor efficiency (read: converting ability) in attack. But its midfield was exploding with genius—Zico in the middle, Socrates running to his right, Eder to the left, and Falcao and Junior running in from behind.

This was not a team that believed in playing a long ball to a striker surging past the defence, hoping he would latch on to the ball and toe-poke it past the keeper. It was a team that passed the ball into blind areas of the pitch, as if in hope more than expectation. More often than not, it found a Brazilian shirt running in on telepathic cue. This was not a team that played with fear of defeat; if it conceded one goal, it shrugged and got on with the job of scoring two. This was the team in which Socrates wore the captain’s armband.

It had to be Socrates, though Zico was the bigger star and a year older. For Socrates knew only one way to play; there was never a Plan B. If you didn’t like how he played, you were free to support another team, no hard feelings, but to do that you’d have to be impervious to the high of coordinated motion.

The Socratic attitude was critical to regain a football-crazed country’s self-respect. The scintillating World Cup victory of 1970 was followed by a decade of dour football. Not only did the Brazilian sides of 1974 and 1978 seem unappealing, they didn’t look like succeeding. All they managed was to look pedestrian in front of Cruyff’s totaalvoetbal and the all-round sparkle of Germany under Beckenbauer.

A response was wanting. In Tele Santana, Brazil chose a manager with crystal notions of footballing aesthetics. In Socrates, his name a serendipitous coincidence, Santana had his ideologue. Socrates had his own take on everything—he called himself the anti-athlete, smoked like a chimney and played down the urgency to win. He refused to train full time, preferring instead to complete his training to get a degree in medicine. His club allowed him to play without training, and he became a doctor before playing for Brazil. He led calls for democracy and free elections when a military regime ruled Brazil.

You couldn’t rush Socrates. He took his time. Seemingly in a different time zone from the other 21 players on the pitch, he could always find extra milliseconds on the ball. Those moments defined his football. Squeezed through his warp, time became space. As he waited and then released the ball, more often than not, it went into an area the opponent defenders could not reach but as if by miracle a Brazilian player could. Those moments have remained unparalleled.

There have been other midfielders since with uncanny vision, but none—not even in the current Spanish and FC Barcelona sides with their ridiculous array of midfield artistry—who can alter the pulse rate of the spectator like the touch of Socrates (Zinedine Zidane is the only viable comparison). It is often said that good playmakers have a sharp sense of every player’s position on the pitch at any given point in time; Socrates knew where they’d be five seconds later.

It shone through in the fuzzy videos Doordarshan showed back in the 1980s, or in the tens of tribute videos that have appeared over the past couple of days on YouTube. In the midst of players scampering around him, Socrates moves in slow motion. His feet barely touch the ground, his lope a tribute to our distant four-legged ancestors who straightened their backs and decided to take their chances with bipedalism.

How could he play for so long despite abusing his body so much? The question has become a persistent tic with connoisseurs of the game, but we couldn’t answer that one if we kept trying. His frail-looking 6’3” frame did a great job of hiding his physical reserves, on show only for those brief seconds when he would suddenly upshift from his usual trot into the kind of gallop that would leave other players praying for a third lung.

His Greek-admiring father could not have better named him for irony. While the philosopher in ancient Greece used dialectics to arrive at the truth, Socrates was a non-dualist. There were no contesting truths in the Socratic Method; the only one he knew and practised was the simple one of receiving the football and passing it to another man wearing the same shirt, to keep doing it till it ended up at the back of the opponent’s net, to then pick up the ball and do it over. And over and over.