The Redemption of Dhoni 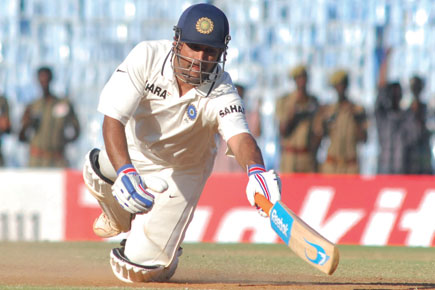 
When Mahendra Singh Dhoni completed his double century against Australia in Chennai on Sunday, you would have gladly allowed him an extended celebration rightaway. But he did not do that. After scampering to his 200th run, he spun around and tried to get the 201st. It was an overthrow. Another run was possible, if not likely. Only after contemplating that run did Dhoni raise his arms in joy.

We are not saying that this qualifies Dhoni for a Nobel Prize. But that small spontaneous reaction from the Indian captain proved one thing. Even after over five hours in the sun, amid the boisterous excitement of the crowd over his approaching milestone, his brain was alert and thinking of the big picture.

Dhoni made 224 runs that had an instant impact on things ranging from record books to public perception. It is the highest score by an Indian wicketkeeper. It is the highest score by an Indian captain. It is only the second time after Virender Sehwag that an Indian scored a double-ton in a day. India’s eight-wicket victory also brought Dhoni on par with Sourav Ganguly for leading the team to most Test wins (21). And Dhoni, who for a while now has been seen as a captain by default and not merit, is once again one of the pillars of the Indian team.

It was an inspired effort, a statement of tactical and physical prowess. He ran singles and twos hard, and when he wanted the Australians to change the field or to raise the tempo, he swung for the fences. In one tireless shift of over five hours, he hauled burning coal into the engine of the Indian innings. Yes, Australia did not have enough spinners to take advantage of the brittle pitch. Yes, the pitch did not help their feared fast bowlers. One of them, James Pattinson, also couldn’t bowl long spells as he was still recovering from injuries. And finally, Dhoni survived a close lbw appeal by Pattinson when on 93. But that does not take much away from the performance. If nothing, Pattinson and Peter Siddle were genuinely fast. And no one likes to play genuine pace bowling.

Two other things make the knock special. One, as Virat Kohli pointed out, Dhoni’s strike rate was above 80 (84.52), remarkable for a double century. Two, he batted mostly with tailenders. Dhoni had a 140-run partnership for the 9th wicket with Bhuvneshwar Kumar. Of these, 103 were scored by Dhoni.

Dhoni and Virender Sehwag, it is believed, are unlikely to get into a scooter with a sidecar and sing Yeh Dosti. Therefore, it would have been brazen to ask someone from the dressing room Sehwag’s reaction to Dhoni’s performance. But the 200-in-a-day connection gave a journalist an excuse to cleverly ask the question at the press conference on the day of the feat.

It was addressed by Kohli. The beginning of a smile could be seen on his face. The right corner of his lips curled up. But he soon regained a non-committal expression, and smothered the spin of the question with a diplomatic reply. “He always loves people who hit sixes,” said Kohli, “He was enjoying it.”

Dhoni reeled in the big hundred in Chennai, something he narrowly missed in Nagpur last December against England. He was under severe pressure to deliver at that time. A series India were expected to win handily was 2-1 in England’s corner. It was felt that except for his captaincy, Dhoni did not merit a place in the team. His keeping was suspect and he was not scoring with the bat either. Feeling the heat, Dhoni dug his heels in and scored a determined 99. It was a courageous knock, reminiscent of Mark Taylor’s career-salvaging century against England in 1997 to end 18 months of batting failure. Though India could not save the series, Dhoni made a point. A hundred would have been a just reward. But when he was on 99, he went for a risky single and rival captain Alastair Cook ran him out at the non-striker’s end.

In Chennai, when Dhoni reached 199, the mind recalled Nagpur. In most ways, he was better off here. He had at least got a century. But in another way, it was more nerve-wracking being on 199. Because getting out on 199 is perhaps harder to deal with than getting out on 99. The chances of your being on the verge of a double hundred are slimmer. But fortune blessed him in Chennai. In any case, he says, he doesn’t worry about centuries. During the press conference on the last day, I asked him whether Nagpur weighed on his mind. “I’ve got five 90s,” he said. “So it doesn’t weigh on my mind anymore. Seriously, I’ve got out in the 90s plenty of times. I personally believe it’s the top six batsmen—okay, I’m batting at No 6 now—but they’re the ones who really worry about the 100s. It’s the weightage of the innings. I’ve never thought about 100s. I remember the 92 I scored at the Oval in 2007. Dilip Vengsarkar was there and he [asked if] I’d do anything different [given a chance]. I said ‘No, I’d bat the same way’.”

Chennai has given Dhoni a lot, mainly two IPL titles with the Chennai Super Kings of which he is captain. It has brought him criticism too. His close association with N Srinivasan, president of the BCCI and owner of the Chennai Super Kings, is often seen as inappropriate. That his finest hour as a batsman would come in the city is either irony or divine justice. What will make the innings even more special for Dhoni is that India won the match. The atmosphere he got his double hundred in was suitably evocative too. The stands were full and the sun was in descent. The softening evening light gave the grass a certain pastoral splendour.

Dhoni has had a rough time for the better part of the last two years. After the high of leading India to the 2011 World Cup win, little went right for him and for India. There were heavy defeats in England and Australia. The World T20 did not go India’s way either. The defeat against England at home was humiliating. In addition, he was not in form and there were controversies over his favouring certain players, his tactics and his equation with Srinivasan. Now, in one innings, a lot has changed. True, the India-Australia series is yet to be won. There is a long way to go and we should not get ahead of ourselves. But Dhoni has redeemed himself for now at least. This is not to say that some of the questions asked by his critics, like Mohinder Amarnath, are invalid. But Dhoni has proved that the batsman in him is alive, and that he can still lead India to important victories.

R Ashwin, Kohli and Tendulkar were the other major contributors to a win that has again injected Indian cricket with a sense of optimism. This was Ashwin’s first Test at his home ground, a ground where he feels “the air speaks to me”. In return, the city could not have asked more than the 12-wicket haul that the offspinner registered. He too had been criticised of late for being ineffective, or for trying too many variations. Chennai offered him redemption, just as it did Dhoni. It was also a reply to critics. And Ashwin is a man who doesn’t turn the other cheek when under fire. On the first day, when a journalist said his performance against England wasn’t the best, Ashwin bristled, “You are supposed to have your opinion and I won’t barge in on that. But I honestly think I didn’t have a bad series against England. I bowled exactly the same way as I had bowled against England. But, today, the wickets were coming.”

Ashwin attributed his performance in Chennai to his coach, Sunil Subramaniam, who detected a glitch in the bowler’s body positioning. “I would like to dedicate this spell to him, because he identified a small thing about body position and we worked on it for five-six sessions in between the [BCCI] Corporate Trophy and this series,” he said. Dhoni felt Ashwin was pitching the ball at the right spots, something that eluded him in previous matches. He also defended Ashwin’s tendency to try variations because he said it was his strength.

Kohli was the other star who had a somewhat modest series against England. But he too rediscovered his touch in Chennai, compiling a characteristically stylish 107, his fourth Test hundred. Kohli is an unlikely mix of flamboyance and discipline. He has a big tattoo on his left arm (a Japanese Samurai warrior) and loves the good life, but he also takes his cricket and fitness seriously. He is like David Beckham, who happily rode the whirl of glamour but never at the cost of his training.

Then there was Tendulkar. He had looked out of sorts against England, save for a 70-plus in Kolkata. In Chennai he was comfortable from the start, handling the pace of the Australians without any shakiness. A lot depends on how you start an innings. Tendulkar hit the first two balls he faced, off Pattinson, for boundaries. Once settled, he almost got a century. He wouldn’t have minded just an 81. Bigger things could be in store later in this series. What was also in evidence was that he remains the most popular man on the field even now. When he walked in to bat, turning his right and left shoulders twice each, the stadium shook. ‘Sachin, Sachin’ remains the loudest cheer in India. Tendulkar, only one of the win’s four architects, is on the verge of retirement. And he can retire knowing that the team is capable enough of the transition. There is reason for hope. As Dhoni said while leaving the press conference to a journalist who asked him how he was: “Good. Surviving.”