The Making of a Champion 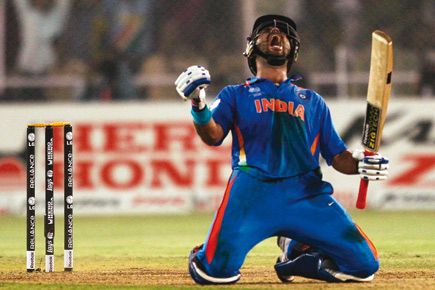 
A lot of important people visited the Pepsi headquarters, but no one made an entry to that office to match boxing promoter Don King’s. Roger Enrico, Pepsi’s former CEO, writes this in The Other Guy Blinked, his entertaining book on the cola wars of his time.

A lot of important people have passed through Kolkata airport. But few would have made an entry like Yuvraj Singh one evening in late 2000. India were to play Bangladesh in the latter’s inaugural Test in Dhaka. Yuvraj was joining the team late. He arrived at Kolkata airport in a yellow Tommy Hilfiger Athletics T-shirt, khaki cargo pants and with a large stereo.

He had recently found stardom. In the just-concluded ICC Champions Trophy in Kenya, Yuvraj and Zaheer Khan had made impressive debuts. Now at the airport, he exuded success. I was going to the match myself, and at Dhaka airport, had a short chat with the rising new star of Indian cricket. One of the questions was about his father, former India bowler Yograj Singh. Yuvraj said he did not talk about his father.

Over 10 years have passed since. Yuvraj is the hero of the ongoing World Cup. When these words appear in print, India would have played Pakistan in the semifinal. Irrespective of the result, Yuvraj’s performance in the tournament has assured him of a place in Indian cricket history. Going into the semifinal, the 29-year-old, who looks like an overgrown boy, had a record-equalling four ‘Man of the Match’ awards to his credit. (Aravinda de Silva in 1996 and Lance Klusener in 1999 are the other two with the distinction). Yuvraj’s resurgence leads you to think once again about his family, more specifically his father and the subject of parental pressure. Yograj pushed Yuvraj hard when he was a child. Was he right to do so? Maybe. Did he make Yuvraj’s childhood unhappy and impair their relations? Likely. Do parents have to be pushy to produce champions? Probably.

Let us start with Yuvraj’s story. Yograj Singh, ‘Yog’ or ‘Yog paaji’ to friends, was a Chandigarh alpha male with as much talent as—some would say more than—Kapil Dev. But it was Kapil who made it big. Yograj seethed. His volatile nature made it harder. He then channelled his bitterness into moulding his older son, Yuvraj, into a champion cricketer. The boy’s heart was in skating. But when he won the skating Nationals even before he was in his teens and showed his father the gold medal, Yograj reacted unexpectedly.  “He had picked me up from the rink and threw the medal out of the car window,” Yuvraj once revealed. “He told me: ‘From now on, you play cricket, not this girls’ sport. If you don’t play cricket, I will break your legs.’”

Yograj has grand designs for his children. Zorawar, Yuvraj’s younger brother, must go to Hollywood. “If he does some body-building, I see him becoming the next Arnold Schwarzenegger. If he is willing to train under me, he can be in Hollywood in four years,” Yograj said in a TV interview in 2007, when Yuvraj had just returned home from India’s World T20 triumph. Yograj also wants his seven-year-old daughter, Amarjot, to become Serena Williams. “I don’t want her to be a Sania Mirza. I want her to be Serena Williams, a Wimbledon champion—the best in the world.” A few years ago, he wanted Yuvraj to marry “someone of the calibre of Steffi Graf”. Call it genetic powerplay.

After Yograj had decided it was cricket for Yuvraj, he asked friend Navjot Singh Sidhu to watch his son play. Sidhu gave his verdict. “The boy doesn’t have it in him,” he told Yograj.

Yuvraj narrated the incident on Rajat Sharma’s Aap ki Adalat. “My father was quiet for a few minutes. Then he said, ‘Let’s see how you do not become a player’. The next four or five years, I was under his watch. Running in the morning, then practice at DAV Institute, where my father was coach. Practice again in the evening and night. My mother had built a nice garden in our yard. My father turned it upside down, made a 17-yard pitch and installed floodlights. He would throw wet tennis balls at me.”

In Ahmedabad, in the quarterfinal against Australia, when the atmosphere had more electricity than Amitabh Bachchan’s Saara Zamaana costume, Yuvraj saw off Mitchell Johnson and Brett Lee bowling at over 140 kmph, sometimes 150. You could trace some of that ability to the wet-ball sessions in the backyard.

Yograj is defiant and proud of his methods. “We give our sons and daughters sheltered lives by protecting them,” he says. “It makes them weak. When I was training Yuvi, I pushed him to the extreme. When he was 10-years-old, a cricket ball hit his head. My mother never spoke to me after that, she said I was torturing him. I wish she were alive now, to see the fruits of that hard work.”

Yuvraj too, older and touched by spirituality, is now more accommodating of the role his father played than he was all those years ago at Dhaka airport. He concedes if it hadn’t been for Yograj, he wouldn’t be where he is.

But on the other hand, their relationship is by all accounts strained, even though they hugged and looked relaxed during the interview after the 2007 World T20. Yuvraj has time and sympathy only for his mother, Shabnam Singh, who made great sacrifices for the sake of her children and whom Yuvraj adores. Shabnam and Yograj are separated. All this reminds us of the cost a family pays in such situations. Of course, in Yuvraj’s case, the problems were excessive. There are several cases where the parent has found a right balance of pressure and compassion.

A Chandigarh cricket person who knows the Singh family says, “I don’t know what sort of relationship Yuvraj and Yograj have. Maybe Yuvraj visits his father once in a while and Yograj still has some hold over him. But it must have been a dreadful childhood for Yuvraj. Yograj is a certified loose cannon. There is no doubt that he was talented. There is no doubt he sowed the seeds of Yuvraj’s career. But his temper problems are serious. As a father and as a husband, he was worse than just pushy.”

According to this source, what saved Yuvraj was the move to Mumbai to train at the Elf-Vengsarkar Academy in 1997. “Getting away from home was good for him,” he says. “He wouldn’t have gone far had he continued in Chandigarh.”

Makarand Waingankar, the cricket talent developer and journalist, is a friend of Yograj. He has stayed at Yograj’s house in the past and hosted Yuvraj when he was a trainee at the Elf-Vengsarkar Academy. He says, “Yograj deserves credit for Yuvraj’s success, but he started getting too involved after a point.” Asked if coming to Mumbai was a turning point for Yuvraj, he says, “It was, but not just in terms of getting away from his father. It toughened him up. He would travel by train from Andheri to Churchgate and back. Initially, he complained, but he (soon) realised that everyone else playing cricket was doing it. His mother is another important factor in his life. Yograj may have initiated him into the game, but it was his mother who provided him love and reassurance.”

In a thank-you note to Waingankar, Yuvraj wrote about his Mumbai experience, “I realised what life actually is for some people. Playing in Chandigarh under my dad was tough but this was even tougher. It made me tough…”

Making it to the top in sports is difficult anyway. In India, it is harder because of lack of infrastructure, corrupt administrators and high costs. A pushy parent, you might think, somehow compensates for the entry barriers and enhances a youngster’s prospects.

Strangely, though, Yuvraj is the lone high-profile Indian cricketer with a known history of a concentration camp upbringing. Mahendra Singh Dhoni’s father wanted his son to study. Sachin Tendulkar’s family was famously sensible. There are no horror stories about the childhoods of Virender Sehwag or Harbhajan Singh either. That should discount the pushy-parent hypothesis.

Sujith Somasunder, the former Karnataka and India player, is now a part-time sports psychologist. He has been through a mental games course designed by Dr Patrick Cohn, a recognised sports psychologist in the United States. Asked how a child could survive parental pressure, he says, “One is if he gets lucky. Two, if parents can check their behaviour. Three, if the kid is exceptionally talented.” With Yuvraj, it seems a combination of one and three; add the unconditional support of his mother.

Talking about the effects of parental pressure, Dr Darshan Shah, a psychiatrist in Ahmedabad, who enjoyed Yuvraj’s heroics in the quarterfinal, says, “Family pressure heightens emotions, which can sometimes help you excel. But in the long run, the emotions need to be soothed, because heightened emotions also mean spent energy.”

“What parents can do is reinforce the process more than the result,” he says. “For example, when the child returns home after a match, they could ask the child what part of his game worked that day instead of asking whether he won or lost. If you love the child when he wins and shun him when he doesn’t, you are attaching his self-worth to results, which is not advisable.”

Dr Shah says, “I feel the family’s role is in minimising distractions around the child and not in any direct involvement in his sport or activity.”

And about Yuvraj, Dr Shah says, “His success is propelling him forward at the moment. But I sense from his comments that he is looking for acceptance.”