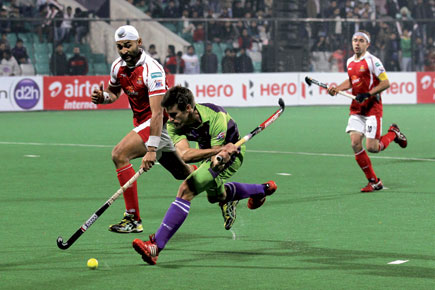 
The inaugural Hockey India League had it all—attractive hockey, packed stands, fans dancing in the aisles right through the four quarters of action, substantial television viewership and tickets sold out within an hour of being made available. Not in the recent past has Indian hockey looked as vibrant as it did over the past month. National team head coach Michael Nobbs summed it up nicely: “This league has the potential to transform Indian hockey for all time to come. I was thrilled to see fans embrace it the way they did. Each of the semi-finals was sold out within hours of the tickets going on sale and the final was played to a packed stadium with thousands waiting outside. Crores of people watched the action on television and there is little doubt the League is here to stay.”

The League had got off to a rather inauspicious start with Hockey India forced to send back Pakistani players. To emerge from the controversy unscathed and generate the kind of public support it did, the League has done wonderfully. And it might well be remembered as the lifeline Indian hockey needed.

The question being asked is: can the League become a sustainable brand like the IPL and, if so, will it help the cause of Indian hockey? Here’s why it can do better than the IPL: at the time the IPL started, India were the world champions in the T20 format and Indian players were among the best in the world. Players from other countries came here to play the IPL, learnt to adapt to subcontinental conditions and have since done very well against India in T20 cricket. India’s performance, on the other hand, has gone downhill since the IPL started in April 2008. With hockey, it is expected to be the other way round. The Australians, English and Dutch are all better at the moment and Indian players have much to gain by playing with the best in the world. They can hone their skills and technique by playing alongside and against the likes of Jamie Dwyer and Moritz Fuerste. Also, the aura of big name players can be intimidating when you meet them only in match situations, and the opportunity to rub shoulders with them and play in the same team helps youngsters get over their awe. To again quote Nobbs: “A couple of days earlier, a youngster from Ranchi Rhinos dribbled past Fuerste during practice and did so showing sublime skill. Fuerste was stunned and was seen applauding the effort. After the practice session, I asked the youngster if he knew who he had just dribbled past. He had no idea that Fuerste was the best player in the world.”

The League also helps improve the fitness levels of Indian players. Sardar Singh, the skipper of the Indian team, claims his boys are now among the fittest in the world. “Each of the teams had world class support staff and that helped the boys a lot. There’s little doubt we can now match the European teams. I’d even say hamara fitness unse behtar hai.”

With a robust injury-management system in place, injured players are not automatically sent home. Nor are they left to work on their rehab on their own. Retaining an injured player at the camp, treating him and monitoring his progress there means the player does not get demoralised and recovers faster.

Also, in appointing Roelant Oltmans as its High Performance Director, Hockey India has got the best talent in that department. Oltmans, who coaches UP Wizards in the Hockey India League, feels there is loads of potential in Indian hockey. With the first and third positions in the inaugural edition of the League going to teams from smaller towns (Ranchi Rhinos won the League; UP Wizards came third), it is evident that interest in hockey is still alive in its north Indian heartland. And with companies like Sahara, Jaypee and others now investing heavily in hockey, chances are the League will see further visibility and increased participation in the years to come.

In doing so, it has the ability to erase memories of London 2012 and herald a new beginning for hockey. Says Nobbs, “I was disappointed with what happened in London and felt horribly bad for Indian supporters. The Hockey India League has come at the right time. We now have a far bigger pool of players to choose from and the results will soon start showing. The future is bright.”