The Curious Case of the 42-Year-Old Cricketer

How Pravin Tambe, an obscure leg spinner, became the best bowler of the Champions League tournament 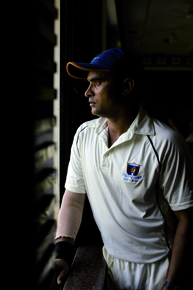 How Pravin Tambe, an obscure leg spinner, became the best bowler of the Champions League tournament


A few days before Sachin Tendulkar announced his retirement from cricket and opened a floodgate of emotions and memories, a similar atmosphere—though on a smaller scale—surrounded the finals of the Champions League tournament (CLT20). Played between the Rajasthan Royals and Mumbai Indians, Tendulkar and Rahul Dravid were going to be seen for the last time in a limited-overs match. The duo gave pre-match bytes, commentators pressed them for anecdotes, and a mushy melodrama hung in the air.

There was no mention of how poorly Dravid and Tendulkar had performed throughout the tournament. Despite both being shadows of their former selves, they had the empathy of spectators. They were two 40-year-olds with decades of cricket behind them, battle-weary men with slowing reflexes in what is essentially a young man’s game.

Yet, the two were not the oldest on the field. In a game where batsmen got away with murderous strokes, an obscure leg-spinner of the Rajasthan Royals, who many had not even heard of, turned out to be the most economical bowler. He took two wickets and conceded only two fours. When he bowled, a Royals victory did not look improbable. And it was not just a lucky patch. His performance throughout the tournament had been stellar. Rotund, stout and double-chinned, a bowler who had not even played a first-class cricket match sent down skiddy leg-break after leg-break with the odd flipper that tricked the best of batsmen. He emerged as the highest wicket taker in the tournament (taking 12 wickets in four matches), bowling, as he says, better than he has ever done. Two days later, he turned 42.

“Do I look fat?” Tambe asks as he attempts to measure his waist with his hands. “My friends phoned to ask why I appear fat on TV. Can TV do that?” It’s a week after the final and Tambe has just appeared behind a jumble of cardboard boxes on the staircase of the building he lives in. In a bright orange T-shirt, he runs barefoot down the steps to his apartment. Inside, the living room is cramped with memorabilia of the recent tournament. A large dummy cheque, the sort seen on TV during prize ceremonies, is placed on a table too small for it. Signed photographs of well-known cricketers he met during the tournament are stacked on another. “You know how it felt?” he asks. “It felt unbelievable.”

Tambe lives in Nahur, a far-flung suburb of Mumbai, with a 13-year-old son, a six-year-old daughter and his wife. The building he lives in is damp and looks badly maintained. With no lift, one has to take a dark stairway coloured with dry jets of paan juice along the walls to reach his fourth floor one-bedroom apartment. Tambe plays cricket in local club matches for the B team of DY Patil Sports Academy. Off the field, he works as the manager of the academy’s hostel.

During earlier editions of the IPL, he acted as a liaison officer whenever matches were played at the DY Patil Stadium. “This means, if the players need ice for an ice bath, I get the ice,” he says, “If someone wants their gear looked after, I do it.” For the first IPL match at DY Patil Stadium, he remembers walking around the Mumbai Indians’ dressing room, asking cricketers if they needed anything and working up the courage to request photographs with them.

Tambe’s is a remarkable story of a bounce back to top form. Before the CLT20 tournament, he was “a nobody”, he says. But just a few matches later, spectators were sitting up each time his captain handed him the ball for an over. Both off and on the field, he was suddenly seen as a threat to batsmen.

He has been playing cricket in various forms since his teenage years—first as a medium pace bowler in the city’s tennis ball cricket tournaments, and later with a leather ball for various clubs in different divisions. He turned to leg spin sometime in his early twenties because his then club lacked good spinners. The last highpoint of his career was back in 2000, when he was on the probables list of Mumbai’s Ranji Trophy team. But a number of good spinners—Sairaj Bahutule, Ramesh Powar and Nilesh Kulkarni, all of whom also went on to represent India—kept Tambe away from first-class cricket. Bahutule and Kulkarni are retired now and Powar has shifted to Rajasthan’s Ranji team. As a result, Tambe was plucked out of near-retirement this year, although he couldn’t make it to the playing 11.

Before he was liaison officer at the IPL, his last encounter with a celebrity cricketer was with Sachin Tendulkar. It was 1998, a few days before Australia reached India to play a marquee Test series, billed as a duel between the world’s best batsman and the world’s best bowler: Tendulkar versus Shane Warne.

Tendulkar played not just the Test matches but also in Australia’s warm-up game against Mumbai. To counter Warne, he wanted to practice against a leg spinner. Tambe, along with another spinner, was summoned to bowl to him at the nets. “For over two hours, we bowled ball after ball to Tendulkar,” says Tambe, “It was a hot sunny day, but we were simply thrilled to be there. He would try all sorts of shots against us, and occasionally would even say ‘good ball’.” Tendulkar put up a great show in the matches, attacking Warne especially, and India went on to win both the warm-up game and the Test series. At the end of the tour, Warne famously remarked that he experienced nightmares of Tendulkar hitting him for sixes. “Every time Warne’s comment came up in conversation, I would tell friends and family that I had a little part to play in it,” he says with modesty.

For a long period, this turned out to be Tambe’s only brush with fame. His name never came up for selection for the Mumbai team after 2000 until this year. He, however, continued to toil for various clubs in the city. He remembers being told how a stint in county cricket would help improve his game, so he got the former cricketer Abey Kuruvilla, a friend, to put in a word for him with some of his acquaintances in the UK. He played for a few years at this level as an amateur, which meant he got no remuneration, just travel fare between India and the UK and an allowance for his stay there.

In 2004, Orient Shipping, the company for which he played, disbanded its cricket team. He was left without a job, a major anxiety for a man with a wife and child to support. “This was probably the time I was most scared in my life,” he says. In panic, he took up the job of a ‘sorter’ at a diamond company for a paltry salary of Rs 1,600 a month, but quit after he was asked to work overtime on a Saturday and miss local games. “They probably thought I was a middle-aged man pursuing a fool’s errand,” he says. “For me, it was never about playing for India or Mumbai. I would have liked that, but my real passion was playing cricket.” Getting a job at DY Patil Sports Academy was a relief indeed.

The Rajasthan Royals break came as a surprise. Having noticed his bowling in a tournament earlier this year, the team’s talent spotters called him for a trial. Although he was picked for the squad, he only got three IPL games to play. However, when two of the squad’s best spinners were banned for spot-fixing (Ankeet Chavan and Ajit Chandila, who were caught along with medium pace bowler Sreesanth), he got a chance to show everyone what he had in him.

Since that dramatic CLT20 performance, Tambe’s life hasn’t changed much. He has been invited to a few Durga Puja pandals as a guest, and had a surprise birthday party thrown by his building society. Grocery delivery boys do smile at him in half-recognition, but he still goes about his old routine. Two days after the CLT20, he was leading DY Patil’s B team in a three-day local match, riding to the venue on his Yamaha Avenger bike he bought second-hand eight years ago. The only reminder of his new-found fame in his building is a poster, now torn, put up at the entrance by his housing colony.

Tambe, who had no first-class experience, was picked up by the Royals for the minimum base price of $10,000. His two Man of the Match awards at the CLT20 had cash prizes of $5,000 each, but he has been too shy to ask his team management if that money is for him or the team.

When he won his first Man of the Match award against the South African team, Highveld Lions, he wanted to keep the outsized dummy cheque he was given as a souvenir, though it is usually returned to the authorities after the ceremony so they can use it for other matches. “I did not know this. So when they came asking, I refused. I did not know if I would win another prize or if I would even play many matches for the team. So I did not want to part with it,” he says. Once managers of the Royals explained how it works, he reluctantly gave it up. The next time he was adjudged Man of the Match, the last to be played in Jaipur (against the Chennai Super Kings), he kept the dummy for himself. “I knew this would be the last match in Jaipur and it would be the last time it was required for the tournament here. So I quietly kept it. And when the finals got over, I brought it home as a souvenir.”

“I don’t know what the future holds for me. Some say, considering my age, I won’t last long. Either I’ll be hit with injuries or my form will vanish. All I know is I’m enjoying the game and bowling at my best. What I have decided to follow is Dravidbhai’s advice,” he says.

At the end of the CLT20 final, Rahul Dravid sought him out. The cricketer had learnt of his age through media reports. He shook Tambe’s hand, smiled at him and said, “For you, remember, life begins at 42.”