Cuba’s BI Fernandez is one of the reasons Indian boxers have been throwing such a mean punch. Meet the first ever non-Indian Dronacharya Award winner 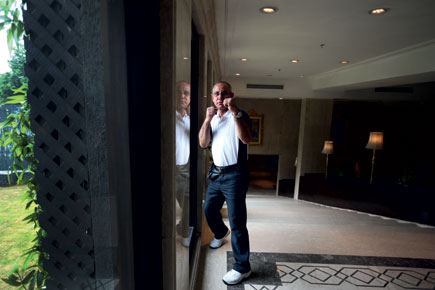 Cuba’s BI Fernandez is one of the reasons Indian boxers have been throwing such a mean punch. Meet the first ever non-Indian Dronacharya Award winner


On a rainy August morning, the lobby of Hotel Ashok in Delhi is buzzing with activity. The nature of this buzz at the hotel, in the heart of the diplomatic enclave of Delhi, is usually dictated by the order of sarkari events planned in the power corridors of the capital. Groggy staffers and crew members of Air-India, who descend on the city by early morning flights from different parts of the world, walk about with an air of familiarity and mechanically pick up their keys before proceeding to their allotted rooms. It is the various huddles in different corners of the lobby, which often reeks of stale air, that keep changing.

This time, on the eve of the National Sports Awards to be given away by President Pranab Mukherjee, the chatter in the lobby is about the London Olympics. The athletes and delegates are heard discussing swimming laps, federation politics or just the ‘delightful’ summer weather in London. As the chaos and size of huddles swells with each passing minute, the ‘Cuban’ walks in.

Dressed in a track suit and carrying a small plastic bag, the Cuban is partially drenched but has no time to examine the extent of the damage as delegates walk up to him to offer their congratulations. The Cuban, as he is known in boxing circles, is BI Fernandez, the first non-Indian to be presented the Dronacharya award, given every year by the Indian Government to sports coaches. A Cuban national, Fernandez was chosen by the awards committee this year as ‘a special consideration’ for his contribution to the success of the national boxing team, which won a good haul medals for India in the last two Olympics.

As he politely smiles and finds his way through the jhappis and handshakes offered by colleagues—who call out his name not in reverence but with the back-slapping camaraderie of meeting an old friend—the coach apologises for being late by two minutes. “I am a stickler for time and hate keeping people waiting for me. It is about discipline,” says the 56-year-old in a thick accent.

“It is just that I have been working in India for over 22 years and have made many friends. This award came as a surprise and everyone is happy for me,” says Fernandez, credited with coaching stalwarts like Dingko Singh, Gurcharan Singh, V Devarajan, Akhil Kumar and Vijender Singh. Fernandez was one of the foreign coaches first hired for the Indian team in 1990. He works at the National Institute of Sport in Patiala (NIS), and divides his time between Cuba and India.

As he settles down for a chat after drying himself up, he asks, “Theek hai?” (everything okay?) minus the accent. “I haven’t picked up many Hindi words, but I can say ‘idhar maro’ (hit here), ‘yeh maro’ (hit this), ‘iss se bacho’ (evade this). For the rest of the communication, my students learn words in English. Together, we manage to understand each other,” he chuckles.

Fernandez recounts the day his name was announced for the Dronacharya award. “I was taking a walk on the NIS premises and was having dinner when I was informed of my selection. I am quite grateful and humbled by this gesture,” he says.  While the boxing scene in India has been galvanised by the celebrity status of Vijender Singh and Mary Kom or coaching rivalries shared by National coach Gurbaksh Singh Sandhu and Jagdish Kumar, Fernandez claims that so far he has preferred to stay in the background—simply doing his job. “My government has sent me here to coach Indian players and that’s what I do.” He admits that part of coaching the team meant finding ways to introduce changes in systems and keeping “everyone happy”—the players and the boxing federation included. But Fernandez believes that his focus on the job has helped him survive the Indian sporting climate for over two decades.

He spells out his mantra for survival. “You have to be polite, patient and cheerful. Stay calm, be focused and persistent, things will change. Look at the boxing team today,” he says with pride. National coach Sandhu, who was part of the selection committee, vouches for this: “Ego has never been an issue with Fernandez.  We have our disagreements, but they are sorted out without any drama. He is very dedicated towards the sport.”

But even the coolest of coaches can fall prey to a rush of blood. Fernandez was spotted yelling “Mafia! Mafia!” before leaving the ring when 2008 Olympic bronze medallist Vijender Singh lost to Uzbekistan’s Abbos Atoev at the London games. “There had been a few ‘unlucky’ decisions throughout the season, which is why that happened,” he says, referring to reactions following controversial decisions in the bouts of Sumit Sangwan, Vikas Krishan and Manoj Kumar.

Fernandez says there is a need to break through lobbies that exist at the international level. “There are lobbies everywhere in the world. So far, the boxing scene was dominated by Kazakhs and Uzbeks, so many bouts have been close and unlucky for us,” he says. The federation had protested decisions awarded to Sangwan and Krishan, earning the Indian team some notoriety. “We started on a negative note and came across as aggressive and arrogant,” Fernandez says. Just as the conversation begins to slide into a rant of sorts, the coach in him takes over. “Hard work is the only way to get noticed. We should play more Games and win clearer bouts, leaving no room for bad luck.”

Fernandez comes from the hills of Santa Clara in Cuba. At first, he trained to become a judoka. “My school was very far from where I stayed and training sessions were so long that I would often bathe in a pond on my way home,” he says, recounting the day he took a dip only to realise that the water was freezing. “That was the day I quit judo and joined a boxing school, which was very close to my house. I was done swimming in that pond.”

Boxing in Cuba enjoys a status quite like Bollywood and cricket in India. Fernandez says that it was “in my blood”.  After dabbling in amateur boxing and surviving a few black eyes and blows with consequences much worse, he gave up fighting himself. In 1976, he did a Masters in physical education and decided to become a boxing coach. “My parents lived on cultivating and selling sugarcane,” Fernandez  says, “They couldn’t tolerate the blood.” He joined the Cuban national team as coach in 1978.

Fernandez’s relationship with Indian boxing began in 1990. He was sent here by the Cuban government as part of a coaching contract signed by the two countries. He joined a team with two Russian coaches at the time. “But we had an abysmal performance in the 1990 Beijing Asian Games. We won just one bronze medal,” says Gurbaksh Singh  Sandhu, who joined as national coach in 1993 after brief stints as coach for the Asian Games of 1982 and 1986. “We wanted to have some exposure from Cuba in terms of technique and decided to do away with the Russians who we faced in the Asian Games anyway, and retained Fernandez as our foreign coach,” Sandhu says.

Fernandez stayed on till 1994 and was brought back in late 1997. He has been a regular for all training seasons of the national team since 2004.

The Cuban’s account of the changing boxing scene in India is typical of most sport stories in India. “We did not have permanent training halls, forget air-conditioners. While travelling, players would come from their towns and villages to the airport, lugging their own bags. There was no respect for the players, which would often kill their confidence.”

The present crop of Indian boxers is treated much better. They have managed to gain some media attention and sponsor interest. But Fernandez’s focus remains the same: instilling confidence. “You have to watch them and nurture them. We need to play more international games to come out stronger,” he says.

He is all set for the next training camp scheduled for October. But before that, Fernandez is headed home for a break. “I have been here in India for 17 months [in a row], and missed my daughter’s wedding. She will be moving to Mexico soon,” he says.

His daughter, 24-year-old Sochye, is also a graduate in physical education. She is a professional shooter. “I might be a boxing coach, but I cannot match the might of her gun. I better be home before she leaves,” he quips before leaving for a rehearsal of the award ceremony.