Vivek Ranadive, a Mumbai-born software tycoon, has bought an NBA team and now promises to be a game changer 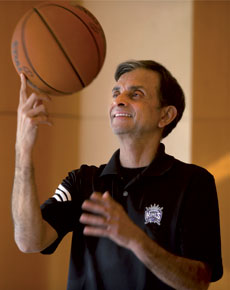 Vivek Ranadive, a Mumbai-born software tycoon, has bought an NBA team and now promises to be a game changer

In the early months of 2013, an interesting spectacle was occurring with an obscure basketball team in the NBA. Years of neglect by the owners, poor on-court performances, and then the recession had relegated the Sacramento Kings to the backwaters of the NBA. The owners wanted to sell the team to an influential group comprising a hedge fund manager and a Microsoft executive that wanted to relocate the team to Seattle. That’s when the drama unfolded. The locals of Sacramento appealed for the team to remain within the city. A rival group popped up, offering to retain the team in Sacramento. But the owners weren’t willing to consider any bid that was smaller and less stable than the one that the group from Seattle had made.

That’s when the rival group pulled out the ace up its sleeve—Vivek Ranadive.

Ranadive, a software tycoon who is one of the most successful Indian diaspora stories, was able to buy the team for a record $535 million. But it wasn’t just half a billion down the drain for a team with little potential. He wasn’t hitting his head on the door on the way in. His dream was bigger than just buying Sacramento Kings. He wanted to revolutionise the NBA, just as he sort of did the software industry several years ago. Sitting in the conference room of a five star hotel in Mumbai, his publicists milling around him, Ranadive, dressed casually in a black T-shirt with full sleeves, reveals his idea in a single phrase: ‘NBA 3.0’. “It’s really not just a basketball team,” he says, “It’s a social network.”

NBA 3.0 is Ranadive’s social media vision of basketball of the future. Instead of focusing on just the US, Ranadive wants to make the sport a global phenomenon, through which he can target the large populations of China and India (China in the last few years has already developed its own version of the NBA). Deploying his expertise in software and handling real-time data, Ranadive wants to be able to embrace fans like nothing before. “If you tweet that you didn’t get a parking spot or that your pizza was cold, I want to address that. Whether it is in a game featuring the Sacramento Kings. Or if you are in Mumbai.”

He is also using his expertise at number- crunching and real time data analysis to improve the on-court performance of the team. When asked what kind of improvements, he says, “I’m creating a Moneyball on steroids,” a reference to the book on which a film starring Brad Pitt is based, where a manager uses a statistics- based strategy to reverse the fortunes of a baseball team that is doing poorly.

Ranadive is 57 years old. He has a slight and lean frame. Slender-boned and with a languorous voice, he watches the proceedings in the conference room with heavy deep-set eyes. Ranadive is what one could call a reporter’s delight. He tells the story of his life in anecdotes—of how he lived as a child in then-Bombay, of how he entertained thoughts of travelling to the US, how he made his first big deals. Every story is a parable of achievement. There is rarely, or rather never, any disappointment.

When he was 11 years old, living in Mumbai’s Juhu area, with the beach across his house and the Maharani of Baroda as a neighbour, he had a transistor radio plugged into his ears one night. “That’s when I heard those magical words—‘That’s one small step for man, one giant leap for mankind.’ And I was like—who are these people that were able to take a man, put him in a box and send him to the moon? I want to be one of them.” That was a turning point in his life, he says, and he grew determined to travel to the country which sent those astronauts and to learn science and technology.

The youngest of three children, Ranadive was competitive right since childhood. He went to Bombay International School, which was partly founded by his parents. The family had instituted a Ranadive prize for those who stood first in class, and every year, he remembers, the Ranadive prize would always be won by the Ranadives. His father, Yashwant Ranadive, fondly referred to as ‘the Captain’ within the household, was a pilot and also general secretary of the National Pilots Association. In 1975, when the Emergency was declared, Yashwant was arrested for getting into a spat with Indira Gandhi. Disobeying the Indira Gandhi administration, the senior Ranadive had grounded a new plane in the Indian Airlines fleet which he judged as unsafe and ordered that no pilots fly it.

“It was shocking,” Ranadive says about the incident. “To learn that my father was in jail. And I think it made a deep impact on us as a family.”

By then Ranadive was around 17 years old and had been offered admission to the Indian Institute of Technology (IIT), Bombay. But he had also been accepted at the Massachusetts Institute of Technology (MIT). Even though Ranadive chose MIT, and had been able to get his family around to that decision, the Reserve Bank of India (RBI) in those days rarely allowed rupees to be converted into dollars. So for an entire day, the young Ranadive camped outside the office of the Governor of the RBI, until he was granted admission for five minutes, during which he was able to convince the Governor. After completing his degree at MIT, he obtained an MBA from Harvard University.

Ranadive is a seer of real time. He popularised what in the world of computer science is called real time processing. Before his software company TIBCO was founded, everyone, including Wall Street, went about their business basing their decisions on information that was scattered across a number of databases. This was called batch processing, and it was tedious and inefficient. What Ranadive’s TIBCO did was collect all the information spread across different databases, and consolidate it as a single stream.

Today, his software doesn’t just power the trading floors of most of Wall Street; it has become the backbone of every efficient business. “If my software shut down,” he explains. “Everything would shut down. The bank would stop functioning. The [stock] exchanges would go down. The airlines would stop. The phone companies would stop. National security would be compromised.” According to Ranadive, a lot can still be done to improve efficiency. He says, “When you make it on a plane, but your bag doesn’t, the airline actually knows about it. It’s just because the information is in different systems— the passenger systems and the baggage systems and ticketing systems are separate entities—[that] you have to wait at the baggage terminal wondering why your baggage hasn’t showed up and [swearing] how you will never fly that airline again. But now if the databases could be brought together and information streamlined, the airline could inform the passenger right at that moment and promise to ship it on the next flight.” “This is just the tip of the iceberg. The data is always there,” he says. “We just have to connect the dots and make it available at the right place at the right time.”

The idea of such software occurred to Ranadive in the early 1980s. Then, all computers were built with what is called a ‘bus’, a piece of hardware into which other components of the computer are plugged. There was no such thing for software, where one program could interact with another. Information had to be gleamed manually from separate programs. Trained as a hardware engineer, this made little sense to Ranadive. “I wanted to do software like hardware,” he says. This was how TIBCO was born. The TIB in TIBCO refers to ‘the information bus’, although other rivals, it is said, called it ‘that Indian bastard’. This ‘software bus’ not only performed all the core functions of the computer, it also allowed other software to share information with it.

TIBCO soon became one of the top Silicon Valley companies, and within a short period, the young MIT graduate who had landed on American shores with just $50 became a billionaire.

Ranadive’s relationship with his wife, Deborah Addicott, with whom he had three children, however, broke down. By 1999, they had filed for divorce. Some years ago, in an attempt to spend more time with his daughter, Anjali, he agreed to coach her basketball team, Redwood City, a team comprising mostly of seventh and eighth graders, in the National Junior Basketball league in the US. The girls were occasional players, who couldn’t either dribble or shoot well. And Ranadive had at that point never played a basketball match. “I was just very afraid that I might embarrass myself in front of my daughter and her friends,” he recalls. So Ranadive instead chose to study the game. He noticed how the game was always played at either of the two ends of the court, either defending or attempting to score, and never at the middle of the court. After the ball was turned over, everyone ran to the other end. “It didn’t make sense to me,” he said. “So I devised a new strategy. We would fight for the ball on every inch of the court—a full-court press for every game.”

This strategy of effort over skill, where opponents were forced to make a mistake, led the team all the way to the national finals. This story of Ranadive coaching a team of young girls up to the nationals was documented by Malcom Gladwell in a book, David and Goliath: Underdogs, Misfits, and the Art of Battling Giants, where he compared Ranadive to a modern day David. This experience, however, also tickled another curiosity— basketball. When the opportunity arose, Ranadive became the co-owner and vice-chairman of the NBA team Golden State Warriors. Later, he sold his stake in the Golden State Warriors to become the majority owner of the Sacramento Kings.

Three months ago, when TIBCO announced that it was being bought out by the private equity firm Vista Equity Partners for $4.3 billion, many assumed that Ranadive was engineering an exit strategy. But Ranadive doesn’t just say that he will very well still be at the helm of affairs at TIBCO, but that its sale points to a new trend in the US market—to go fully private. “The American market currently has a hole in it,” he says. “If you are a company that is making huge loses, investors are still willing to support you. But if you have a business that’s profitable and well run, but wants to invest for the future, the best bet is to take it private. You will be able to do much more as a private firm.”

When I ask Ranadive if it isn’t ironic that for all the business he has built in America, which he now, through basketball, wants to expand to India, his grand uncle, BT Ranadive, was one of the pioneers of the Communist Party and trade union movement in India, Ranadive disagrees. He says, “Our ideas were, or rather are, to make the world a better place.” “He wanted to do this through his ideals. And I want to do this with my idea that you can master the ocean of data in this world.”