Stopped at the Gate

The logistics and control of a fast sport in India 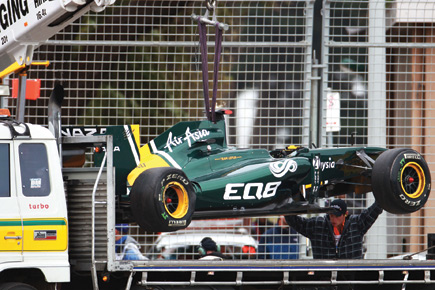 The logistics and control of a fast sport in India


For the organisers of India’s first Formula 1 race, at the end of it all, after the push and pull of bureaucracy, after the track is laid, after space is made for an entire Eden Gardens’ crowd of spectators, comes one final onslaught. The demand for passes. “For free.” The man who utters the word tacks on a dry laugh. These tickets are for “wellwishers”, as he refers to them, the ones who help things happen by stepping out of the way. So, there are tickets and special enclosures for the families of these men and women equally capable of either helping or hindering F1. “You won’t see the ministers who ask for these tickets at the race,” the race official says. “This is for their sons and daughters. But not them. This sport is seen as elitist, so they won’t attend.”

When people talk of the logistics of organising a Formula 1 event, they refer to the orchestrated movement of skilled people and expensive equipment so that things work seemingly effortlessly around race day. What is hauled from circuit to circuit across the world usually stays the same: five planeloads of cargo fly from one race to another. If there are not enough spares to go round, F1’s logistics partner is always at hand to transport and deliver equipment within 24 hours.

It sounds neat. But it wasn’t. “We didn’t have any experience in this kind of movement,” says Askari Zaidi, vice-president at Jaypee Sports International Ltd (JPSI), the event’s local organiser, of the logistical exercise. “Neither the government agencies nor we were aware of many things. For example, Customs did not know what kind of cargo would come through. You can import cars easily anywhere else in the world. But not here.”

Logistics also involves other things. In India, it involves a lot of other things. Free passes, as mentioned, ensure a relatively smooth run. Then there are permissions to get, some of them special. JPSI even needed a no-objection certificate for the race—because, in the race official’s words, “motorsport is not a registered sport in India”.

Now that everyone knows what to expect, Zaidi adds, the next time will be smoother. But there have been other complications. India bans alcohol advertisements, for example, leaving brands to pursue tipplers in more insidious ways. So the race organisers had to urge teams to rid themselves of several offending logos for the Indian race.

JPSI also reached an agreement with the Central Board of Excise and Customs so that packages flown in were not cracked open at the airport. Says the race official, “We set up an office for customs officials right at the track.” But not all problems were traceable to government regulations. The company had to convince international race officials that India’s TV media needed to be let in. The officials were very reluctant, but an agreement was reached by which seven news channels would be allowed—on the condition that an international affiliation would disqualify a channel.

For JPSI, the logistical hurdles have involved walking a tightrope between India’s tight controls and those of modern Formula 1’s billionaire manager, Bernie Ecclestone.

Since its start, Formula 1 has been seen as something of a rich man’s sport. However, in its early years—or until recently—it had no obvious administration to speak of. It was a high-stakes arena where rules were applied inconsistently, conditions were often dangerous, and teams entered and withdrew casually. Notes a Harvard Business School case study by Professor Tarun Khanna: ‘F1 competition was totally disorganized when Ecclestone became FOCA president in the mid-1970s. Racing teams travelled from country to country every two weeks, negotiating the terms of their participation in the next race on-site with the local promoter. If teams upon arriving at the track did not like the terms that race promoters or circuit owners offered, they sometimes refused to race at that event. At the same time, teams sought greater sponsorship commitments to fund their rising engineering costs. However, corporate sponsors were reluctant to commit more to racing team budgets without receiving sufficient visibility in return. Sponsors were not pleased when their teams chose not to race; TV broadcasters were reluctant to schedule F1 programming if team participation was uncertain. Historically, no overarching contract or sporting constitution had governed relationships among racing teams, the local promoters of individual races, and the broadcasters and sponsors who sought an audience. Ecclestone saw value in linking these disparate actors. Alone among the team owners, Ecclestone was willing to step in and act as race promoter if necessary, taking on the financial risk of staging some of the more commercially precarious events. But he also insisted that teams commit to a full season of racing, participating in all events. This pleased the crowds, the TV stations, and the sponsors.’ (Incidentally, the role of money still hasn’t changed. In 2002, as the HBS case study cites Eurobusiness as noting, Ferrari’s costs for each racing kilometre were put at $59,144. Its budget that season was over $300 million.)

Ecclestone, who ran an automobile dealership, took ownership of Brabham, a racing team, in the midst of this chaos, and managed to convince the other teams—run by people with no interest in business, according to the case study—that he could represent them far more effectively. ‘King Bernie pretty much engineered the world’s second-largest sport, after soccer, using guile and moxie,’ as the case study cites a 2001 Forbes article. He was a hard negotiator whose skills had been honed as a salesman, as a 1998 Wall Street Journal article described him: ‘He has been known to spill coffee or drop a stack of papers to create a diversion if the other side has the upper hand, and then quickly take back control. “You can’t let him get ahead of you in negotiations,” says Christopher Pook, organizer of the former Long Beach, Calif., Grand Prix. Mr Pook tried unsuccessfully to get Mr Ecclestone to lower his race fees, forcing the annual event to shut down in 1983. “Once he does, you never catch up.”’

These hard tactics came into focus at the very beginning of his stint as president of the sport’s constructors association, when he pressured race organisers to exclude drivers and cars that were not part of the association from races. In 1974, The New York Times described the plight of one driver who couldn’t seem to get a foot in: ‘Paris, June 29. It was reaching the point where winning grand prix races was not as difficult as starting them. Chris Amon, the talented driver from New Zealand, was having entry applications returned so quickly he must have thought he had a communicable disease.’

Ecclestone took on the sport’s logistics for a price. Over the next decade, he helped settle the contentious issue of TV rights and assumed direct charge of them. As the case study shows, it was in keeping with the kind of control he wanted to exert—and still does. It is bothersome at times, says a JPSI executive, but helps preserve the sport’s shiny identity. According to the study, ‘Ecclestone was the face that F1 presented to TV broadcasters. To cement their allegiance, Ecclestone had given a 33.3% discount to those who agreed not to show rival races such as the Indy 500. He had also played tough, requiring that broadcasters show every race of the season or receive none at all.’ Closer home, the JPSI executive vents his frustration over F1’s rigid guidelines on advertisements: “This hindered our creativity.”

For some, it’s a relief that the race is happening at all. Formula 1 was supposed to arrive in India in 2009. In September 2007, the Suresh Kalmadi-headed Indian Olympic Association said it was set to host India’s first race. This was during a visit by track designer Hermann Tilke to identify racetrack sites in India. “He has gone around and we have shown him a few places. He will go back and give his views to Bernie,” Kalmadi told Reuters.

The inaugural race was first moved to 2010, and then to 2011. Along the way, it became a purely corporate enterprise. The IOA, which had said it was ready to host the race even as the Commonwealth Games loomed, made way for Jaypee. And the company grew keenly aware that it would be doing this alone. “In most other countries, there is government involvement in building tracks or operating races,” says the executive, “Not here.”

Exactly 16 days before the race, India’s Enforcement Directorate (ED) issued a Rs 200 crore notice to the Jaypee Group under the Foreign Exchange Management Act. The complexities of hosting a tightly controlled international sporting event in a tightly controlled domestic business environment only seemed to get more complex.

Perhaps, the advantages of hosting a Formula 1 race justify the excitement. The HBS study cites a 1998 report outlining the sort of money F1 generates. ‘According to the report, in 1998 over 2 million spectators attending just 11 F1 races in Europe spent approximately $500 million at 127,339 local businesses that employed 738,354 people. The authors reached their conclusions after comparing the European Grand Prix to the premier American football, baseball, basketball, and hockey team events, as well as to IndyCar and Nascar racing. Unlike major American team sport events, IndyCar and Nascar did create substantial wealth for their host communities. But the difference between their events and F1 events was of both kind and degree. For example, F1 events generated on average over twice as much local wealth per event as IndyCar events. In addition, at F1 events, money spent was ‘new money’ coming into the local economy, stimulating spending that would not occur without the presence of the F1 event. For this reason, state and local governments the world over lobbied Ecclestone to assign a race to them. Heads of state such as Malaysia’s Prime Minister Mahathir Mohamad sought to host a Grand Prix as a way to improve their international profile. Mahathir in particular hoped to use F1 to spur Malaysia’s nascent car industry and facilitate technology transfers. Similarly, Lebanese politicians and entrepreneurs lobbied Ecclestone to make Beirut an annual F1 stop to promote tourism and tout its economic progress.’

Now, as race day approaches, JPSI’s 6,000 personnel are just about finished with their work, ready to “hand over” the track to the title sponsor, Airtel, anytime now. From here on, the company hopes to earn a fat wad on gate receipts, although Ecclestone’s companies keep control of the lucrative ‘paddock clubs’, where food and imported alcohol cost a tiny fortune and being seen is often treated as a small sub-event. At the Singapore Grand Prix, tickets for the club sold for around $6,500; tickets for other corporate suites went for between $3,800 and $7,000.

But what happens after the race? JPSI plans races of other kinds. The company is already in talks with MotoGP for motorbike events. For now, though, Formula 1 is what is having nails chewed all round. “It should be easier next time,” the executive says for the fifth time in an hour. But as the late-hour ED notice shows, anything could still happen.