Playing to the Galleries 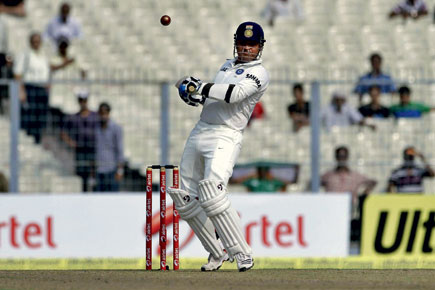 
Year 1992-93. It’s Day 5 of the India-England Test at the Eden Gardens, with India needing just 34 runs to win. The paisa vasool equation is loaded against a big spectator turnout. And yet the 80,000-odd seats at the stadium (a good 20,000 more than current capacity) are all taken to watch Sachin Tendulkar and Vinod Kambli wrap up the formality in minutes. It might have been more reasonable to watch the last rites on television, but clearly Kolkata cricket fans didn’t think so.

Year 2011. Two decades later, the contrast couldn’t have been more profound. Sachin Tendulkar was on the verge of a historic 100th international hundred and yet there were no takers for tickets. A staggering 45,000 seats went unoccupied on Day 1; 50,000-plus seats on Day 2. Even when Sachin was batting, there were clusters of empty seats all over the stadium, including the prestigious BC Roy Club House. People just did not bother.

The just-concluded India-West Indies Test match at the Eden Gardens is no aberration. Even for the one-day international against England on 25 October, Eden Gardens was more than half empty. And for the T20 international on 29 October (the first T20 international in Kolkata), the stadium was a third empty. The Kolkata crowd, which had filled the stadium to capacity in 1997, bracing the sultry May heat during the Independence Cup final between Pakistan and Sri Lanka, stayed away from watching their own heroes in action in what had been touted as a ‘revenge series.’

All the five ODIs against England were likewise played in half empty venues. Even the Wankhede, hosting Dhoni’s India for the first time since the historic World Cup final against Sri Lanka in April, was no more than half full for the fourth ODI.

The crowds have just deserted Indian cricket grounds. Even traditional Test centres like the Eden and Wankhede are now finding it hard to attract spectators to the five-day game, a trend that started with the India-South Africa Test series played in February-March 2010, dubbed the unofficial world Test championship, no less, by the media. The billing was justified because the series was played between teams ranked No. 1 and 2 at the time. The first test at Nagpur in the absolutely fantastic VCA stadium at Jamtha drew no more than 1,000 spectators a day. Even the lure of free tickets didn’t work.

Some blamed it on the distance (Jamtha is 16 km from Nagpur city) but the same venue was packed to capacity during an India-Australia ODI in early November 2009. Home advantage is as much about familiar conditions as it is about crowd support, and at Nagpur this factor was just not in play. What makes playing at the MCG or Eden that much more intimidating for touring teams is the sight of those heads in the stands rooting for the home team. Steve Waugh’s legendary Australian team of 2001 will willingly testify to this.

To the BCCI’s alarm, the shorter versions of the game have also started to suffer. The jewel in the Board’s crown, the IPL, was played to half empty grounds in the 2011 season. And for the Champions League, a tournament with little meaning, stadiums were never more than a third full since inception.

The optimistic counter-argument to this crowd apathy is that the cricket economy is no longer dependent on gate sales. Gate receipts, it is argued, don’t matter; it’s now all about television revenues and the millions made from it. Till the conclusion of IPL season 3 in May 2010, sponsors were queuing up to buy prime time slots and the broadcaster was happy flaunting high TRPs for most matches. It meant happiness for all in the business of cricket — advertise during an IPL game and get guaranteed eyeballs.

But the argument that gate receipts don’t matter is fundamentally flawed because empty grounds also make bad TV and have an adverse impact on viewers. Empty grounds, it is known in the television industry, mean flat pictures, which in turn impact the intensity of TV viewing. Not without reason do producers love close-ups of cheering crowds in stands. The great abundance of fan merchandise at IPL venues is engineered to guarantee the same effect, feed the same frenzy, and to set up scenarios that look good on TV.

So it is that television ratings too have plunged. Ratings of IPL season 4, played in April-May 2011, are a good index. Even a World Cup triumph was not enough to stoke viewer interest in the IPL. According to statistics from six cities— Delhi, Mumbai, Chennai, Kolkata, Bangalore and Hyderabad—the average television rating (TVR) of the IPL in 2011 was 3.91, a more than 25 per cent drop from 2010 (5.51). The IPL final between Chennai Super Kings and Royal Challengers Bangalore had a TVR of just 6.96. For the first time in its short history, an IPL final had recorded a single-digit TVR. By contrast, the 2010 final played between Chennai Super Kings and Mumbai Indians had recorded a TVR of 12.9.

The drop in TVRs, it may be surmised, would have been far greater had India not won the World Cup. An Indian defeat would have caused much disillusionment and the IPL would have faced the brunt of fan wrath, as was the case with the Champions League in the aftermath of the disastrous tour of England. The World Cup organisers should consider themselves blessed for the fantastic final week set up for them. India playing a quarterfinal against Australia followed by a semi-final against Pakistan and the final against Sri Lanka. This was a script made in heaven for the BCCI and ICC. Host broadcaster ESPN made the most of the bonanza, with the TVR soaring to 23.2 per cent for the final. The India-Pakistan semi-final recorded an all-time high TVR of 35.2 per cent, a record that might be impossible to overhaul in the foreseeable future.

The BCCI’s alarm is real. In its last working committee meeting on 29 October, a significant amount of time was spent discussing the ‘fan withdrawal syndrome’. Most working committee members, all insisting on anonymity, admitted to a genuine concern over empty stadiums. There was talk of drawing up a list of measures to increase spectator comfort and to make the grounds more fan-friendly; there was talk of reviewing ticket prices too. Online sales, it was agreed, are fast becoming the order of the day with professional agencies taking over from amateur operations. The BCCI working committee, some members asserted, is determined to ensure that fans make it back to the grounds at the earliest.

For the BCCI, it is embarrassing to note that England-Australia Test matches are still played in front of sizeable crowds on most grounds. During India’s tour of England, most grounds had been sold out months before the tour began and the MCG and SCG have already recorded sizeable sales for the Boxing Day and New Year Tests involving India. Just a year earlier, an entire Ashes series was played to packed stadiums in England. A pedigreed Boxing Day Test at the MCG easily gets 60,000-plus spectators on most days.

Two things stand out in this moment of crisis for Indian cricket. The first is obvious—too many matches have dulled the interest of fans. The nationalistic fervour around the game is on the wane and watching India play isn’t the same anymore. A win or loss is imbued with less significance because there is inevitably another game within a fortnight. It means there is little or no chance to celebrate a win or mourn a loss. Within six days of the World Cup ending, you were expected to start cheering for Mumbai or Kolkata or Delhi. Also, most cricket grounds now are assured of their share of matches every year and watching a particular match isn’t so big in a fan’s annual calendar.

Some argue that the cumulative numbers (of people watching cricket) have not gone down. Rather, the perception has changed. They may have a point. For example, till 2007-08, Eden Gardens would play host to one Test match a year. And fans would salivate at the prospect and do anything to catch the action live. Now, the Eden hosts seven IPL games and one or more international matches every year. In 2011, the stadium hosted seven IPL games, one ODI, one T20 and one Test match. All told, 14 days of cricket. If we assume the stadium was half full for these 14 days, it means 450,000 people watched cricket at the Eden in 2011 (current capacity is a little over 60,000). This number is slightly higher than the 400,000 that watched Test cricket in 2001 or 2006-07. Yet, in this case, looking at it as a stadium half full is perhaps being overly optimistic.

The BCCI needs to think out of the box. Allot relatively smaller centres more matches to start with. Even in an otherwise grim 2011, IPL matches at Indore, for example, were played to capacity crowds. Smaller centres, starved of cricket action, can do with more ODIs and T20 contests. In some of these towns and smaller cities, there is still a hunger to watch the stars in action. Rotation by rote will not do either; marquee centres like the Eden, Wankhede or Kotla should be reserved for pedigree contests. Matches like the current India-West Indies series should never have gone to Delhi, Mumbai or Kolkata. If such a contest is given to Nagpur, it ought to be played at the Civil Lines stadium inside the city and not at Jamtha, which will mean fans don’t have to travel distances to catch the action. And when England come to India in October 2011, in what will be the next big-ticket Test series on Indian soil, play all four Tests at heritage venues with strong traditions of cricket watching. This is the BCCI’s best bet to get the crowds back to the grounds.

The ‘fan withdrawal syndrome’ is Indian cricket’s worst crisis in a long time, perhaps even worse than the match-fixing scandal. At the height of the fixing controversy in 2000-01, it took just one series to get the crowds back to the grounds. The India-Australia series of 2001 was a chartbuster, with huge crowds watching every single day of the series. Served in smaller doses, quality action still had takers, no longer the case with non-stop cricket for more than eight months a year.

Will the crowds return? The fate of Indian cricket hinges on that question much more than the possible comeback dates for stars struggling with injuries. There are no definite answers yet.