Olympics: Blame It on Rio 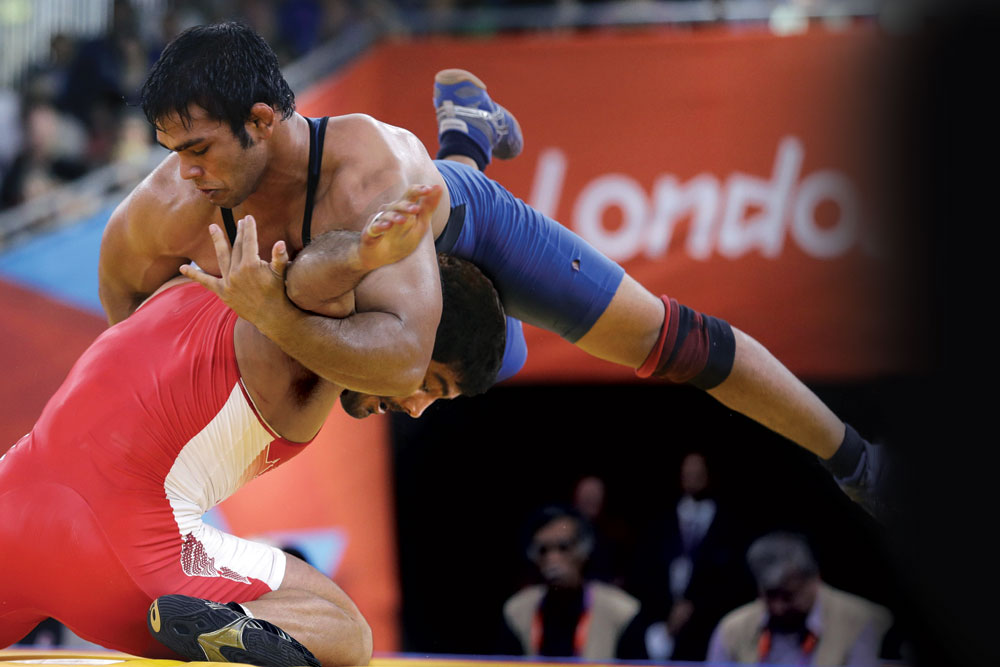 WITH ABOUT 40 seconds left in the match, the French wrestler Zelimkhan Khadjiev’s and the Indian wrestler Narsingh Yadav’s heads are locked together. Yadav moves this way and that, aiming for the legs, and then the torso, but nothing seems to be coming his way. It is 15 September 2015, at the World Wrestling Championships at Los Angeles. The two are fighting for the bronze medal and a quota for an entry into the Rio Olympics. Yadav has to score three times the points he has so far managed just to equal Khadjiev. And time is quickly slipping away.

Yadav was going to lose like most had expected. And Sushil Kumar, Indian wrestling’s most famous pehelwan and a two-time Olympic medallist, who had recused himself from the tournament because of an injury, could win the Olympic spot later in another qualifying championship as expected.

Assistant Indian wrestling coach Jagmal Singh who had been training Yadav in Mumbai since he was 10, and who was present at the venue, felt a shiver go through his body. ‘Narsingh is going to lose,’ he thought to himself. ‘Unless something really drastic happens.’ And then something happened. Forty seconds left into the match, a full eight points behind, Yadav swerved his head to the right. He had seen an opening. Within a fraction of a second, in a flurry of rapid moves, the strong Indian wrestler moved his head to the right, and trapped the opponents in a headlock between his powerful left and right arm. Before Khadjiev realised what had happened, the ground beneath had slipped. Using the strength of his upper body, Yadav picked his opponent and threw him over his shoulder onto the mat, not for once letting go of the head. Khadjiev’s hands and legs flapped, but Yadav wasn’t letting go.

On that big night, the fast-improving Yadav had pulled out his big move. He didn’t just win the medal and an Olympic spot for the country. He also put the wrestling community, the sports ministry, the Indian judiciary, and perhaps even the Prime Minister’s Office, into what is perhaps the biggest dilemma facing Indian sports right now. Who should go for the 74-kg category to the Rio Olympics—the young wrestler who won the quota for the country, or the old king of the Indian mat, Sushil Kumar?

But it isn’t just Sushil Kumar, 32, and Narsingh Yadav, 26, who despite the fierceness of their campaigns, on the face of it at least, maintain civility and mutual respect. As the Rio Olympics approach, as young contenders emerge to challenge old kings, and as sports bodies continue to allegedly operate in mysterious and sometimes partisan ways, rivalries both on and off-field unsurprisingly ensue.

Rivalries among Olympic sport athletes were visible in the early 1980s when the age of the ‘Payyoli Express’, PT Usha, coincided with the emergence of another promising sprinter, Usha’s fellow Kerala athlete MD Valsamma. It was evident, it is said, when Usha won two silver medals at the 1982 New Delhi Asiad, yet all the adulation was directed towards Valsamma who had won the gold in the 400m hurdles. Valsamma received the Arjuna Award and the Padma Shri, apart from Rs1 lakh by the Kerala state government. Usha received only Rs 50,000 from the state government for that achievement. In less than two years, Usha was preparing to compete in the 400m hurdles with an eye on the 1984 Los Angeles Olympics, a category Valsamma usually competed in, resulting in a lot of reported heartburn. Usha eventually lost out on a bronze at the 1984 Olympics by 1/100th of a second.

ALMOST THREE DECADES later, in the run-up to the last Olympics, the long-simmering animosity within India’s most celebrated tennis pair emerged in the open when Mahesh Bhupathi refused to partner Leander Paes at the Olympics. Rohan Bopanna also declined to pair with Paes. The imbroglio was resolved when Bhupathi partnered with Bopanna, and Paes played with Vishnu Vardhan. Sania Mirza who paired with Paes in the mixed doubles category opened up about how she was used as ‘bait’ to pacify Paes into the arrangement. “…what I find disillusioning is the humiliating manner in which I was put up as a bait to try and pacify one of the disgruntled stalwarts of Indian tennis,” she had said back then.

At the centre of the current debate about whether or not trials should be held between Sushil Kumar and Narsingh Yadav is the absence of a well-established tradition in India about how wrestlers are selected for the Olympics. In most cases, quota winners have been sent, but there have been instances where trials were conducted to settle the debate. In 2004, the wrestler Kripa Shankar Patel unsuccessfully challenged in court the selection of Yogeshwar Dutt, the quota winner for the Athens Olympics. As the coach and father-in-law of Sushil Kumar, Satpal Singh points out, “The quota belongs to India. Narsingh is a good wrestler. But the quota doesn’t belong to the wrestler who won it.” Sushil Kumar adds, “All I am asking for is a trial. Not a direct selection.” Satpal Singh adds, “If the quota belongs to the country and the purpose is to win a medal, then it is in the interest of the country to find out who between the two holds the better prospect of winning in the competition.”

Satpal Singh and Sushil Kumar say the latter was asked, even after Yadav won the quota, to train for the Olympics in the 74-kg category. According to someone familiar with the Wrestling Federation of India (WFI) and unconnected to Sushil Kumar, the impression even at the start of this year was that a trial was going to be conducted between the two wrestlers. “We were told to train,” Satpal Singh says. “The sports ministry even spent over Rs 1.15 crore for Kumar’s training in Georgia.” Yadav and his coach Jagmal Singh, however, claim they were told no trial would take place.

With the WFI unwilling to pay attention, Kumar has pushed his case elsewhere. He has conducted a social media campaign, written to the sports ministry and the Prime Minister’s Office for intervention, and finally dragged the issue to court. While Yadav and Kumar have tried to keep their contest off the mat as clean as possible, Yadav does concede that he is a tad disappointed in the senior wrestler’s campaign. “It is a bit demotivating,” he says. Instead of focusing on training, he says he now has to field calls from the media asking if he is scared of Sushil Kumar. For the last few days, every few hours a police van patrols the SAI centre at Patiala to ensure that no outside group tries to harm Yadav. Jagmal Sangh clarifies that these police patrols are only a precautionary measure, given how the debate over the trials might get enflamed.

And although he won’t quite publicly admit it, the fiasco has resulted in diminishing Kumar’s image in Yadav’s estimation. To the son of a poor migrant who found employment as a milkman in Mumbai’s Jogeshwari locality, Yadav grew up idolising Sushil Kumar. “He was so thrilled when Kumar won the 2008 bronze medal (at the Beijing Olympics),” Jagmal Singh remembers. Four years later at the London Olympics, Yadav had graduated to being a teammate, competing in the 74-kg category. He crashed out disappointingly in his first match while Kumar went on to win silver in the 66 kg category.

ACCORDING TO THE young Haryana boxer Pinki Rani Jangra, 26, one of the primary issues within Indian sports is the often rampant favouritism displayed by sports bodies. “When decisions go against you, even when everyone else thinks you have done better, what can you do?” she asks. Jangra, one of the top female Indian boxers in the 51-kg category, invariably finds herself in opposition to her more famous fighter in this category, 33-year-old Mary Kom. “They want her to go for the Olympics. They would rather bank on a well-known name like Mary instead of sending a youngster, even if she can beat Mary,” she says. “It is just safer for them.”

The relationship between the two boxers soured drastically in 2009 when during a quarterfinal match for the national championship, a little-known Jangra defeated the then four-time world champion Kom. To the young Haryana boxer, not unlike Yadav’s idolisation of Kumar, Kom was more than a senior pugilist. “You have to understand,” Jangra says, “for us female boxers, the story of Mary Kom is a great inspiration. I grew up wanting to be Mary Kom.” Jangra began to consider her 2009 bout as the turning point in her then fledgling career. “I began to believe that I belonged here. That I could compete with the best,” she says. But Kom, according to Jangra, did not take the 2009 defeat well. She accused the Haryana lobby of trying to finish off her career. In the next few years, Jangra lost several matches against Kom. But about five years later, during the trials for the 2014 Commonwealth Games in Patiala, Jangra once again managed to defeat Kom. The Manipuri boxer accused the judges of racial discrimination.

This year, as the old warhorse Kom began preparing for what she probably hopes would be her swan song—an Olympic appearance (although it now looks certain she won’t qualify after her defeat at the ongoing Women’s World Boxing Championship)— and the new challenger began to pursue her own dream of appearing in her first Olympics bout, their dreams collided yet again. Jangra alleges the authorities have tended to favour Kom.

During a Railways’ trial to determine who to send for the national selection tests for the 2016 South Asian Games, Jangra, despite defeating boxer Sarjubala, was made to undergo a rematch on the grounds that two non-qualified judges had been present. Jangra was declared the loser in the next match. She tried to participate in the national selections by representing Haryana, but her request was turned down. Eventually, Mary Kom defeated Sarjubala at the final SAG test event. The favouritism, Jangra alleges, continued to play when AIBA (Amateur International Boxing Association) began to talk of sending the winners of the SAG test event to the Asia-Oceania Olympic qualifiers. Trials were set up after Jangra publicly protested and threatened to pursue a legal case. Mary Kom defeated Jangra, and later at the World Championship selection trials, but the heartburn remained. “The day Mary was named AIBA’s ambassador for Women’s World Boxing Championship (in April), I knew that irrespective of the trials, the Indian sports authorities were going to definitely send her. Not me,” she says.

WHEN SPEAKING about the debate of whether or not trials should be held, Satpal Singh recalls what is perhaps the only wrestling match between Sushil Kumar and Narsingh around five years ago at a Railways-organised tournament. “Sushil wanted to test himself against stronger wrestlers. So despite weighing around 66 kg, he entered the tournament’s 84-kg category,” Satpal Singh remarks, “He beat Narsingh easily.”

Jagmal Singh dismisses the results of that match pointing out how Yadav has, in the last few years, undergone remarkable improvement. “Forget that match. Forget all this talk. Forget the court case,” says the large Mahabali in expectant glee. “Let the two pehelwans meet—a one on one, a best of three, or five, or 10, whatever. Phir dekhte hain kaun behtar hai (let’s then see who’s better).