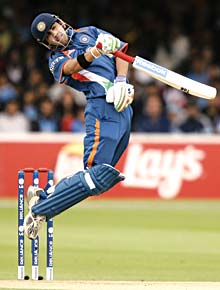 
The first officer of Star Trek, the one who would need custom made ear muffs, renders an opponent unconscious by pinching a nerve at the base of his neck. This technique is called the Vulcan Pinch. England used it on India in the World T20. The difference was they did it with a ball. Periodic use of short deliveries by their bowlers, fired up after being booed at Lord’s by dumb Indian fans, asphyxiated Indian batsmen. They’re no longer the galacticos of T20.

The evening after India’s exit from a tournament, one they’d dramatically won in 2007, there was a hint of disbelief in the voice of Praveen Amre, the Mumbai Indians’ coach and a batsman who scored a hundred on Test debut on a bouncy Durban pitch. While speaking about how damage could have been prevented, he defined a short ball: “Below the head but above the shoulder.”

You are not a driver till you can drive in traffic and you are not a complete batsman if you cannot play the rising ball well. Some of India’s famed players have struggled against it. Mohammad Azharuddin would rear up into its path, or maybe had extremely strong teeth which he enjoyed testing. Sourav Ganguly would jump, thinking the sphere coming his way was a rasgolla, and then, realising it was not, arch his torso back. It may happen that in his Behala mansion one evening, after changing into a kurta, Ganguly feels poetic. He may write a Bengali version of ‘My Favourite Things’. Don’t expect to find a verse on Greg Chappell or fast pitches. Nari Contractor was almost fatally felled by Charlie Griffith (though it prolonged his fame). The discomfort of Indian batsmen against bounce led Brett Lee to unveil the phrase ‘chin music’ before a series. At the World T20, England captain Paul Collingwood said, “We were conscious (of India’s problems with short-pitched bowling).”

Indians are not the only lemons against short-pitched bowling. It restricted Sir Don Bradman to a relatively lukewarm average of 57 in the Bodyline series. Repeated failure on the tour of Australia in 1975-76, when Dennis Lillee and Jeff Thomson were on the loose, forced Sir Viv Richards to consult a sports psychologist. But the great ones learn. Richards proved himself in future contests with the same adversaries. He was fearless anyway. Armed with technique and confidence, he hooked and cut his way to greatness.

India had been subjected to short deliveries by the West Indies in their previous match but did not appear to learn from the experience. “They went for big shots when they could have taken singles and rotated the strike,” says Amre.

Playing the rising ball is like stepping on an escalator. The first impulse is important. It has to be decisive. Otherwise you are in an embarrassing tangle. Go up and work it away off the chest or get under and slash. Strength of the arm matters. Batsmen like Tendulkar can punch the ball far even from an uncomfortable height. England followed India out of the tournament the next day. But Kevin Pietersen’s raised shoulders and open elbows were instructive on how to play the short ball. They enabled him to make room for his stroke. Being 6 ft 4 inch helps, of course.

More than all else, the defeat at Lord’s has underscored the need for bouncy wickets in India. It may not solve all problems, for there can never be one solution to a challenge involving many people and several skills. But it will be a big step forward and will help not just Indian batsmen but also bowlers. Flat pitches may result in free scoring, but in the long term they are restrictive.