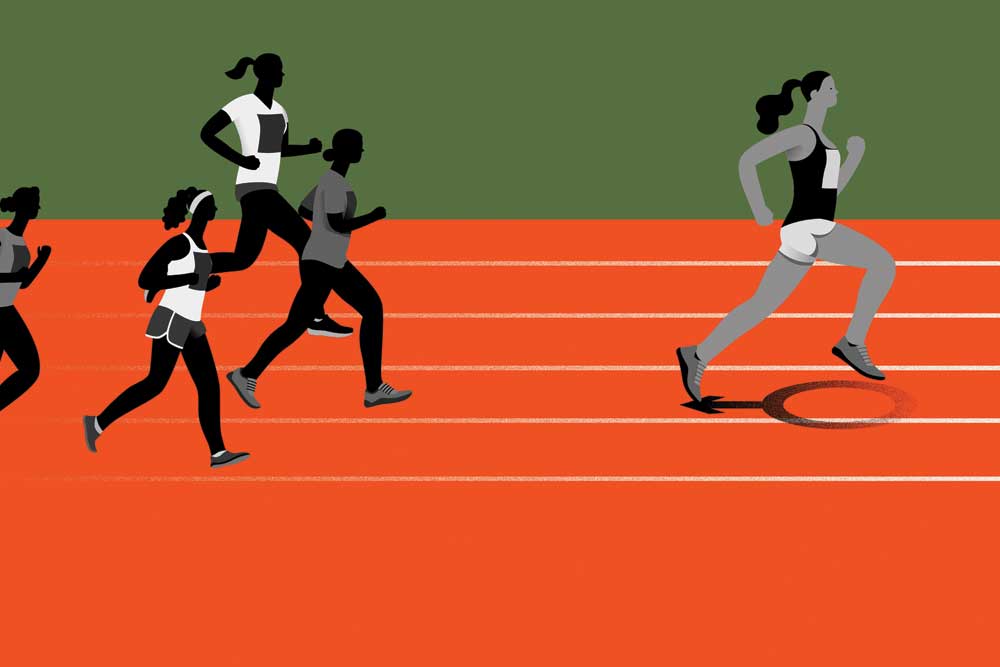 EVER SINCE HER RETURN to competitive sport, the sprinter Dutee Chand has been phenomenal. She had successfully argued in 2015 that the higher-than-usual amount of testosterone in her body did not confer any advantage on her on the track. Chand set a new national record (completing women’s 100 m dash in 11.33 seconds in April 2016), only to smash it twice in a single day just two months later (11.24 seconds at an international competition in Kazakhstan). She qualified for the 2016 Rio Olympics, the first Indian female sprinter to do so in 36 years. And although she failed to progress beyond the heats there, a host of prestigious silver and bronze medals, from the Asian Athletics Championships to the Asian Games, have since come to adorn her cabinet.

Today, she sits cooped up in her room at the Pullela Gopichand Academy in Hyderabad, with a set of books on law in front of her. Chand has been training at the badminton academy since 2016, ever since she experienced what she called a ‘social boycott’ by female athletes upon her return to the National Institute of Sports in Patiala.

There might be the World Championships in Athletics in Doha, her next big tournament, in October. “But there’s the law exam before,” she says. Chand has been studying law through a correspondence course—she is now in her fourth year—ever since she became interested in the subject during the time she was challenging the ruling that forbade her on the track.

But for the last two weeks, Chand has been experiencing a creeping sense of anxiety. “It’s not really fear,” she says. “But this really bad feeling —about how the suspicion and all that talk [around the gender of female athletes] can start for others like me.” Chand is referring to the recent decision by the Court of Arbitration for Sport (CAS), an international court for sports, which ruled that female athletes with testosterone levels higher than average need to lower these levels if they want to compete in women’s events between 400 m and a mile. “When you don’t do well they say, ‘You are no good’. And when you do too well, they say, ‘Oh, she is not a woman’,” she says.

The current case centred around the fate of the Olympic 800 m champion Caster Semenya. The South African athlete’s feats on the track and her physical appearance have often drawn suspicions about her gender. She had appealed against the International Association of Athletics Federations (IAAF) when it introduced rules that made it mandatory for women athletes with hyperandrogenism (a condition in which their bodies produce more than average testosterone) to lower their testosterone levels. But the CAS ruled against her.

According to the new rule, to compete in women’s races between 400 m and a mile, all athletes must have testosterone levels not more than 5 nanomoles per litre (nm/l) of blood. The normal male range is believed to be 7.7-29.4 nm/l and the female range, 0.1-1.8 nm/l. Those with a higher count will have to take medication, not wholly safe, to suppress these levels.

This ruling’s implications go far beyond these sprint events. And arguably beyond all sports itself.

How will this new rule affect athletics in India? There have been several cases of suspected hyperandrogenism in the past, and the national sports bodies have handled these cases notoriously.

“No such rules will be prescribed here,” says CK Valson, the secretary at the Athletics Federation of India. “Besides, why should we?” The IAAF has mentioned its rules on testosterone levels are applicable only for international competitions.

There are however complications. What if a female athlete with a higher-than-permitted level of testosterone qualifies for an international event such as the Olympics at a domestic meet? Technically, she will have to be selected, even though she would not be allowed at the Olympics for instance.

“When you don’t do well they say, ‘you are no good’. And when you do too well, they say, ‘Oh she is not a woman’” – Dutee Chand, sprinter

“Perhaps these rules will get clearer over time,” Valson says. “Anyway, I don’t think [India needs] to worry. We have Dutee with [hyperandrogenism]. But this new rule doesn’t apply to her [Chand participates in the 100 and 200 m categories, which are untouched by the new rules].”

Not many however are so convinced the athletics federations in India will ‘let things be’. Given how our federations have treated athletes with hyperandrogenism in the past, several people fear something akin to a witch-hunt might secretly take place. According to Dr Payoshni Mitra, an athletes’ rights activist, who was appointed by the Government as Chand’s adviser and also testified for Semenya at the CAS, if women with hyperandrogenism are barred from competing at international events, it is very likely tests and procedures could be conducted at the national level on female athletes with suspected hyperandrogenism to screen them before investing in their training and development. “Everything in athletics, we have to remember, from sports hostel accommodation to funding and sponsorship, everything is directed towards the potential [of athletes] in competing at international tournaments and winning medals,” she says.

According to the IAAF rules, it is only they, and not national federations, that can conduct investigations. Mitra fears these tests could be done secretly. “These rules promote a culture of suspicion and surveillance in women’s sports. National federations have in the past handled such cases in their own shoddy ways. In the past, athletes have been tested secretly in India. Protocols of confidentiality and informed consent were not followed resulting in violation of athletes’ rights. This, I fear, may happen again.”

“Only real ladies can participate in ladies’ events. I am not blaming them…but it is unfair for other athletes,” says PT Usha, coach and former sprinter

Gopi Shankar Madurai, an intersex activist, refers to the case of the former sprinter Santhi Soundarajan, with whom he has worked closely in her rehabilitation. Less than 24 hours after winning a silver medal at the 2006 Asian Games in Doha, Soundarajan was made to undergo a test. “Ten doctors [from the Olympic Council of Asia medical committee] took a blood test and made her strip. They never told her what it was about, and, without any explanation, she was asked to leave the Games,” he says. Back in India, a few days later, the media was reporting she had failed a ‘gender test’. “It was made out to be as though Soundarajan was a man disguised as a woman,” he says.

The athlete tried to kill herself. At one point she was working as a labourer in a brick kiln. Since then, Soundarajan has found herself a job as a coach. But people still taunt her. Last year, she filed a complaint against a colleague who would sit outside the women’s restroom to tell her she should use the men’s room. After the humiliation that Soundarajan went through, Madurai claims, several Indian female athletes with possible hyperandrogenism retired. “They just cut short their careers, citing injury or some other reason. They didn’t want to risk going through the ordeal Soundarajan went through,” Madurai says.

There have been several such humiliating experiences, from Chand and Soundarajan to Pinki Pramanik, another female athlete who was accused of being male. In another case, a promising 18-year-old sprinter from Goa, Pratima Gaonkar, later found to have been intersex, killed herself in 2001 because it is feared she had been forced to go through a ‘gender test’.

“ONLY REAL LADIES CAN participate in ladies’ events,” says the well-known former sprinter and now coach PT Usha over the phone. She enunciates each word slowly and loudly, as though it were a rule she was reading out from a book of sports regulations. She is indelicate, perhaps even offensive. But she clarifies: “Look, I am not blaming [athletes who have hyperandrogenism]. This is not in their control. But one should also remember that when they compete in ladies’ events, it is unfair for other athletes.”

The CAS ruling has been interpreted by many as an expression of sexism and racism, of governing bodies composed mostly of White men scrutinising women’s bodies, a majority of them African and South Asian, to prescribe a narrow idea of womanhood. Many of these arguments refer to the case of the Olympic swimmer Michael Phelps, whose remarkable biological traits, from exceptionally long arms to a body that produced less than average lactic acid (which causes fatigue), were celebrated, while high testosterone, a biological trait in some women, is deemed unfair.

Less than 24 hours after winning a silver medal at the 2006 Asian Games, Santhi Soundarajan was forced to take a ‘gender test’.  The Indian media reported it as if she were a man disguised as a woman

These comparisons however aren’t as clear-cut. What Usha drives at is an agreed-upon biological definition, however crude, upon which male and female events are segregated.

The problem is it has been difficult to arrive upon a way of distinguishing between men and women in sports. In the past, chromosomes were tested. But they were abandoned after being found unsatisfactory. Some women were found to have the chromosome XY, seen usually in men, instead of XX, usual in women. But their performances weren’t found to be enhanced by it.

Scientists have for now settled on the testosterone level as the best marker. It has generally been believed that women with high levels of testosterone do disproportionately well in middle- distance races. But some argue this is more myth than reality.

Many countries are currently weighing laws that will allow people to categorise their genders. In America, for instance, the Equality Act bill proposed by Democrats would prohibit sports officials from discriminating between athletes using biological sex. This could effectively force the US, according to the Economist, to select transwomen who have had no hormone treatment in its Olympic teams, even though the International Olympic Committee would bar them. Self-identified gender is becoming the norm in many places in sports. “Since September [2018] Canadian university athletes have been able to compete in the category of their choice, without hormone treatment. American high-school students in 18 states and Washington, DC, could already make that decision. In Connecticut transgirls finished first and second in the 100 metres at last year’s junior state championships,” the Economist reports.

International sports bodies are however unlikely ever to accept self-identified gender. The line separating men and women may be blurry in the real world, but there can be no grey areas on the track. Sports, at least for now, fails to accommodate such nuances.