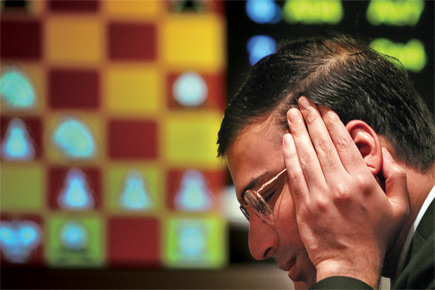 
In many western countries, young adults take a year off from studying to ‘find themselves’. Gap year students, with annotated second-hand copies of Lonely Planet in their backpacks, form the bedrock of budget tourism. This is not common practice in India, and back in 1987, it was very unusual. Viswanathan Anand’s parents were understandably concerned when he decided to go backpacking and play a sequence of chess tournaments after his high school.

The schedule meant joining Chennai’s Loyola College a month late. Anand was confident he could catch up and the college was agreeable about special leave. So the Viswanathans swallowed their misgivings and let their boy find himself. The backpacking paid off. By the time Anand attended his first college lecture, he had won the World Junior Championship and become India’s first Grandmaster (GM).

This didn’t surprise anybody who had been following his career. In 1983, at the Ahmedabad Nationals, he made the national team on debut. But he says his breakthrough happened a few months earlier in a national team tournament. There he beat several decent players, including former national champion Manuel Aaron. He has no idea why: “I just woke up one morning and I was playing levels better than I ever had.”

In Ahmedabad, his voice hadn’t still broken. By far the youngest there, he played blindingly fast, spending far more time at Space Invaders in the neighbouring videogames parlour than at the 64 squares. The post-mortems made it obvious that he calculated a huge number of variations quickly, and more than that, he had an instinct for seeing the best move instantly in complex situations. The next year, he won the Asian Juniors, and he became the national champion in 1985.

In college, he juggled exams in-between playing the cut-throat circuits of Europe and the US. India’s tight forex regulations prevented him from taking money out of the country. He won often enough to sustain himself, but prize money is paid at the end of a tournament. So, there were long periods of living on less than $5 a day.

On those trips, he also developed a friends’ network all over Europe—places to unroll a sleeping bag and crash on the carpet, no questions asked. Sometimes he was living three guys to a hotel room. Once, at the US Open, he was one of seven people sharing a room: “It was tricky managing the loo and towels.”

The next big breakthrough was into the World Title Candidates. His US-resident elder sister (who teaches business administration at Michigan University) bought him a computer. He put together the money (and forex clearances) to hire help. There was a key stint with the man he calls “Guru”. GM Mikhail Gurevitch, a Soviet defector, helped him train before Anand met former world champion Anatoly Karpov in the World Title Candidates’ quarter finals, in a match he narrowly lost.

Guru was Anand’s first formal coach. It was an illuminating experience for the 21-year-old, who was already a title contender. Guru taught him to think in a structured fashion and to understand the Soviets. But Anand says, “I’d have hated to have been coached earlier. I enjoyed playing and solving puzzles. If I’d been attending ‘chess period’ in school like the Russians, I would have lost interest. That happened with tennis, a game I enjoyed playing but hated being coached at.”

The computer also played a vital role in closing the information gap. Chess preparation is all about analysing games, seeking new ideas and testing them. In the dead-tree era, game compilations used to arrive a month or two late in India, so Indian analysis was outdated before it started. Post databases and the internet, the lags finally disappeared. Once engines (chess-playing programmes) got stronger, analysis also became much easier for individuals based outside the charmed circles of Eastern Europe.

Fred Friedel, the Hamburg-based founder of Chessbase, the world’s largest purveyor of chess software, was one of Anand’s hosts. Friedel says he was “an excellent beta-tester and early adopter with some peculiar habits. For example, Anand had never seen anybody use a mouse. He used to hold it the wrong way and use his thumbs to click (a bit like Blackberry addicts). He did this fast enough to play videogames”.

On 11 September 1995,  Anand sat down to his first title match, on the top floor of the World Trade Center in New York. Six years later, the coincidences of date and venue seemed surreal. He lost that match badly, beaten 4-1 by Garry Kasparov.  Anand registered the first win but then Kasparov surged back.

The Russians wrote off the 25-year-old as gutless and Anand admits he lost his nerve at one stage. “I hadn’t learnt to cope with match tension and basically lacked the experience. It was in NY that I learnt there are critical moments when everything hangs in the balance and you must be prepared to do drastic things. Kasparov might have won anyway, he was a much more rounded player. I needed to learn too many things on the fly to have a realistic chance. It was only after that match that I started to widen my opening repertoire and approach key games differently.”

Anand thoroughly internalised the lessons. His rare failures since have occurred when he’s been out of form rather than due to tension. He has also almost never made unfortunate choices subsequently in key games.

There was a hiatus in title play because of the fractured state of the world chess organisation. In 2000,  Anand won his first world title. That was a Wimbledon-style KO format where a field of 128 was whittled down via matches. He didn’t lose a single game in working out seven opponents.

In 2007, he won again. This time, the title tournament was a double-round-robin with the eight best players in the world. Again, he was undefeated. He’s defended that title twice, so far. In 2008 he won 3-1 against Vladimir Kramnik, and this  month,  he beat Veselin Topalov 3-2.  He is the only man to have won the title and held it in three different formats and also the only man to have won the world blitz and rapid titles as well.

The ability to relax could be partly because his life is not all chess, unlike several other top players. He reads widely in four languages, though it’s non-fiction for preference. He is perfectly happy to chat about global warming, currency fluctuations, World of Warcraft, wind turbines or reverse osmosis.

He is also much more likely to get excited discussing the fast-hadron collider or obscure astronomical phenomena (not astrological—he is a complete sceptic), or chuckling over dead Monty Python parrots, than discussing the Queen’s Gambit. And the one sure way to irritate him is to get between him and the widescreen when Real Madrid is on song.

In Sofia, Anand made his share of errors, but he managed to pigeonhole them, relax and focus on the future. It took nerves to fight back after Game 1. Anand lost in just 30 moves (after a rare memory lapse) and Topalov spent less than 30 minutes, clearly indicating that he had outguessed Anand in the opening.

Anand’s almost fatalistic attitude to handling pressure is best summed up by his description of the final climactic game against Topalov. The match was tied 2-2. “I woke up knowing that it could be one of the happiest or saddest days of my life, or somewhere in-between (if it went to tiebreaks). I knew that in the end, it would come down to nerves. So I stopped thinking about it, and sat down to play.”

Another key sporting attribute is extreme flexibility. Whatever the format, or the opponent, Anand adapts accordingly. He started out as an outright attacking player. Then, he learnt defence and how to manoeuvre for small advantages. Finally, he mixed and matched to become a universal.

This lack of style is his defining characteristic. Even geniuses like Kasparov, Karpov and Fischer have trademark likes and dislikes. To use a very rough analogy, Sehwag cannot bat like Dravid on demand, or vice versa. Fischer hated closed positions, Kasparov is a (relatively) poor defender, Karpov dislikes violent tactics.

Anand does exactly what his opponent of the moment most dislikes. Against the calm Kramnik, he used violent tactics. At the World Championship in Sofia, against the aggressive Topalov, he played calmly. Playing head-to-head, he minimises risk, since a match is won by winning just one game more than the opponent.

His time management in Sofia is another pointer to his pragmatism and flexibility. Anand is the fastest and most dominant rapid player in history. But he actually played slower than Topalov in Sofia, taking his time to explore territory new to both players.

This was after the shattering Game 1 loss. He learnt that the Bulgarian Grandmaster was using a new computer programme (Rybka 4) on a super-computer (an IBM Blue Gene) to analyse Anand’s previous patterns. Anand was confident that he could handle new situations better than Topalov, and he took his time to understand the nuances.

People like working with him. Since 2008, he has had a settled team, all of them Top 100 GMs whose rankings and results have improved markedly since they started working with him. In addition, he could call on Magnus Carlsen, the Norwegian genius who is most favoured to be his next challenger. Anand has worked with Carlsen earlier and Carlsen played out key positions in some intense practice sessions. During the Sofia match itself, Kramnik (who has bad blood with Topalov) called Anand to discuss the specifics of certain openings.

Kasparov spoke to him before the match, “huffing and puffing on Skype” when they discussed certain situations. No other world champion has ever been on good enough terms with his rivals to even contemplate such ‘groupthink’. As Friedel puts it, “Topalov had a super computer with 112 clusters, and Anand had a human cluster.” It might just be that ‘Mr Nice Guy’ finishes first because he is a nice guy.