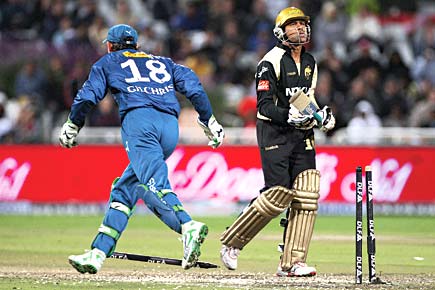 
BUNNY IS probably in his forties. He is tall, with a salt and pepper beard. His speech and voice are cultured, though he says messing with him is like playing with fire. Bunny is in the taxi business and owns ten cars. If a planned deal falls into place, he will have fifty. He is slightly different from taxi drivers in India. He plays golf. And after years in the business, he knows Durban like his steering wheel.

At the Beverly Hills Hotel, Bunny sees something special. He talks in the even pitch of a man who has seen it all. But now, as he narrates the incident, he sounds a bit emotional. An elderly lady of Indian origin wanted to meet Shah Rukh Khan, who was staying at the hotel. The security guards would not allow it, but Shah Rukh overruled their decision. He met the lady. He called her “Ma”. She wanted to garland him. He stopped her. “I’m not God, I’m just fortunate,” he said.

Shah Rukh is not as fortunate with the Kolkata Knight Riders (KKR), the IPL team he owns. Not in a cricketing sense. Last year, it did well financially. KKR and Rajasthan Royals were the only teams to make operating profits. But Rajasthan became the champions. Kolkata did not reach the semis. This year, they have begun poorly. “Shah Rukh is a proud man. He will be disappointed,” Brendon McCullum, the KKR captain and wicketkeeper, said after the defeat to Deccan Chargers in their first match. That should be the case even now. But the IPL is a long competition. A team plays 14 league matches. Things can change.

What is difficult to undo, however, is the creation of a hard-to-love identity, the KKR ego. Their promotional campaign, featuring elements of the jungle, is over the top. Its focus is the team owner. In the final frame, a feral Shah Rukh bites air. Their coach, John Buchanan, is not a popular appointment. Sourav Ganguly is unhappy about being displaced as captain. It is said that he is not on talking terms with Shah Rukh. The mischievous IPL player blog that has entered popular discourse in the cricketing world, though believed to be fake, has made the team a subject of scrutiny and derision. As a source says, “Some of the things on the blog are true.”

Ganguly’s jersey number is 24, McCullum’s is 42. When Ganguly bowls, which he does often and effectively, McCullum encourages him from behind the stumps with the shout, “bowling!” He doesn’t say his name though, which he does when others bowl. To his credit, McCullum does not allow the captaincy controversy to inhibit him. He is assertive. “Throw it!” he commands Ajit Agarkar impatiently when the Indian is slow to pick the ball up and hurl it back (as in the memorable match against Rajasthan Royals). To Ganguly’s credit, he puts his grudges aside and performs with bat as well as ball. Yuvraj Singh is the prince of Kingsmead, Durban’s cricket stadium. He hit England’s Stuart Broad for six sixes here. But when the Kings XI Punjab play KKR at the ground, he finds Ganguly’s away-going deliveries tricky. He treats them with respect.

The day KKR play Mumbai Indians in Port Elizabeth, Aakash Chopra is scheduled to fly back to India. Sanjay Bangar is returning too. Chopra says he was the “prime suspect” in the fake IPL blogger episode. But he says no one within the team treated him as one. The only reason he and Bangar are going back is that, “John told us that we would have no opportunity to play.” Chopra denies a player revolt arising in the team. Asked if Buchanan is an unpopular coach, he says, “You can’t please everyone. The team is 100 per cent professional and has accepted John as the coach. We are different individuals but work under one umbrella. We are like any of the other franchises. It is just that we are more talked about.” A lady at a souvenir stall at Kingsmead says that KKR shirts are second only to Mumbai Indians in terms of demand.

There is as much music and dance at IPL games as sport, and it is time we rename stadiums as stadiscos. The acoustics at the venues explode after every six or wicket or suchlike. The roof of the ground propels fireworks. Hit songs like Mahi Ve, whose ‘kaano baali chamke’ line confirms that it is an ode to Chris Gayle merely picturised on Preity Zinta, blast out of speakers. Kingsmead has been “rigged out”, says a staffer of the company Sound Stylists, with 48 speakers, 24 amplifiers, a Yamaha PM5D sound mixer and something formidable called ‘full backline compliment’.

Three friends, all aged 25, drive into this merry atmosphere from Pietermaritzburg to watch the Mumbai Indians meet the Deccan Chargers on Saturday, 25 April. They think this is the final before the final. “Mumbai have the most balanced team and the Chargers have the best opening pair (Adam Gilchrist and Herschelle Gibbs),” says Vanesan Govender. “These two teams will play the final.” The other two teams in the semifinals, he says, will be Delhi Daredevils and Chennai Super Kings. His friend Ashley Hariprasad says the Mumbai Indians are popular because of the presence of the eminent South Africans, Shaun Pollock and Jonty Rhodes, in their coaching staff. The other reason is Sachin Tendulkar. Had it been an India versus South Africa match, the boys say they would support India. They admit that this does not go down well with South African players. The team they would never cheer for is Australia. “We hate them,” they say.

Ashley is wearing a Manchester United shirt. United are to play Tottenham Hotspur in the Premier League later in the day. After cricket, the three will watch football. Two of them will consume an unquantifiable amount beer and a girlfriend of one of the three will drive them back home. South Africans will watch any amount of sport, they say. The attendance at Kingsmead that day is 16,875. The previous day, it was 15,683. The following Monday, it is 17,350. The maximum is about 18,000.

The cricket is educative. You realise Twenty20 is not as simplistic as people think it is. The thinking and strategising is relentless. “It is not Mickey Mouse cricket,” Adam Gilchrist, the Deccan Chargers captain, tells us after his team’s practice. “The mindgames that go on in Twenty20 are on par with any cricket that I have played, including Test cricket. The challenge between the bowler and the batter is almost like a game of poker where the two guys are staring at each other and the first one to blink is the one out. There are so many questions in your mind; should you go hard on this ball, do you wait a bit? I am sure it’s the same with the bowler. Do I want to pump in, do I bowl the yorker, do I bowl defensively?”

Kings XI Punjab beat the 168 posted by the Bangalore Royal Challengers in a sensible way, proving that T20 chases need not be manic. They take few risks as Ravi Bopara guides them home. They lose their first wicket in the seventh over. After 15 overs they are 109 for two, needing 60 to win from five. This is when they step it up. Agreed, they could have fallen short. But there is a method to their innings which is admirable.

Things are slightly more relaxed at a whitepainted house of moderate size in the Phoenix Settlement area. You only hear the rustle of dry brown leaves as the wind blows them off the driveway. This is Sarvodaya. This is where Gandhi, or Ghandi, as former President APJ Kalam has spelt in the visitors’ book, lived.

MKG came to South Africa in 1893, 116 years before SRK did. Sarvodaya was razed in apartheid violence in 1985. But the foundation and the stone steps survived. A replica of the house was erected and unveiled in 2000. It has a number of photographs and other MKG memorabilia. One photograph is of a document written by Gandhi titled, The Indian Franchise. It is somewhat different from, say, the IPL franchises. You try to visualise Gandhi at the Kingsmead ground in Durban. But it is difficult. The materialism of the IPL would have repulsed him. If at all, he might have supported the Deccan Chargers, one of the more self-effacing and financially sane teams. He would have liked Gilchrist, who is principled enough to walk when he is out without waiting for the umpire’s decision. What’s more, he walks with the same pace and purpose as Gandhi. Gilchrist would have made an excellent companion on the Dandi March.

April the 24th becomes a significant day in the history of Indian cricket. Harbhajan Singh learns what birthday bumps are. “Bums? Bums?” he says when asked if players had performed the ritual upon one man who, everyone knows, was born on this day 36 years ago. When explained the meaning of the term, Harbhajan says, “He’s Sachin. You cannot do that with him.” After giving soundbites, Harbhajan starts to leave for the midnight party, away from the media. K Srikanth grabs him and says, “Sardar chal, mere saath dus minute baat kar.” (Let’s talk for ten minutes.) Arms around each other, they sing ‘Happy birthday’. One by one, members of the Indian cricket fraternity emerge from the party, take cake, and go back in. When Sunil Gavaskar comes, Shishir Hattangadi says to the hostess, “Give him more, he likes it.” Tendulkar is his composed self. He doesn’t eat more cake than what is smeared on his face by teammates. He wears a T-shirt with the face of a roaring tiger, which would make some people somewhere far away happy.

While a special day in the life of a jewel of Indian sport is being celebrated, in another suite, the subject is stones. Yes. The Institute of Quarrying is having an expo. ‘Leave no stone uncrushed’ a poster says.

The next day, after the Kings XI Punjab’s win over Bangalore, a journalist points out to Yuvraj Singh that his shirt is full of logos. “Good to have a fulfilling T-shirt,” he says.