Loneliness of a German Fan

You get glares from people around you. But it only makes you clearer about why you’re cheering for this team. 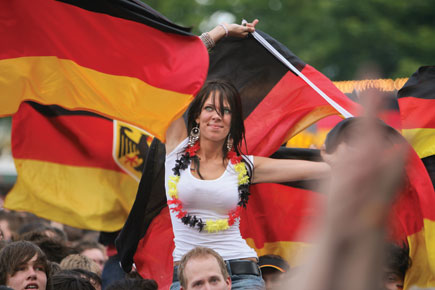 You get glares from people around you. But it only makes you clearer about why you’re cheering for this team.


People discover distant countries and fall in love with them in different ways. My wife’s choices, for instance, are dictated by literature and art. On some nights, when we indulge in a bit of fantasy travel, her list is topped by France, because it is home to the Louvre, and Ireland, the background of almost all of James Joyce’s works. My allegiance is equally distributed among the mad twins of Europe.

On such trips, invariably, I happily drop her off in the vicinity of the Champs-Élysées, and depending on the time of year, head towards the bucolic surroundings of Worcestershire’s New Road cricket ground, or in the winter, turn east to North Rhine-Westphalia, specifically to the Signal Iduna Park—the spiritual home of German football.

My first port of entry to Germany was Boris Becker, when the fresh-faced, big-serving teenage sensation shook the world by winning Wimbledon in 1985. My faith in German sporting supremacy was reinforced by a stunning Steffi Graf when she dethroned the reigning bully of women’s tennis, Martina Navratilova. And once the Wall fell, I added up the gold medals won by the two Germanies (49) at the Seoul Olympics. The unified Bundesrepublik seemed streets ahead of the US (36), and fast catching up with a quickly crumbling USSR (55).

By the time the 1990 football World Cup arrived, the first time that even group matches were shown live on Doordarshan, I was getting pulped by my Brazil-supporting classmates for planting the Deutschland tricolour on my desk. I had the last laugh. Brazil were crap and Germany supreme, having humbled old foes England and Argentina.

Supporting Germany in India always was a rather lonely affair. Over the past quarter century, I’ve only encountered two other fellow Germany fans (both Bengalis). It’s a team everyone loves to despise.

Gary Linekar’s aversion was such that he handed them the ultimate left-handed compliment: football is a simple game, 22 men chase a ball for 90 minutes, and at the end, the Germans win. Others like Diego Maradona were more effusive in their admiration of German great Lothar Matthaus. ‘He is the best rival I’ve ever had. I guess that’s enough to define him,’ he wrote in his autobiography.

The European envy is understandable. They are the continent’s most decorated team, and opponents dread facing them in high-stakes knockout games as much as cricket teams fear Australia. It’s surprising they don’t receive the respect they deserve from neutrals such as Indians. It’s largely because we have bought into the silly myth perpetuated by the English about Germany’s dour Teutonic efficiency, and how the Germans make up for their lack of flair with plain old grit. Their success is usually glossed over by commentators with adjectives such as “efficient”, “strong”, “physical” and “disciplined”.

At any rate, being well organised is not a crime. Surely, there’s plenty of historical evidence to nail the stereotype, but you only have to watch the current German team in action. Three quarters into the first round of matches, Germany have looked the most technically gifted and aggressive team. Their 4-0 demolition of Australia, albeit a footballing lightweight, was orchestrated by a bunch of 20-somethings who held out lessons in artistry for the more fancied teams. Interestingly, Germany have been playing some of the most attractive football since 2006. Under the then coach Jurgen Klinsmann, they swapped defensive solidity for attack mindedness.

The new wave of multiculturalism sweeping the German team lends them yet greater character. Many German players even seem well rounded individuals, compared to the overpaid, tantrum-prone English and Latin superstars. Captain Philipp Lahm, at 26, runs a charity to support underprivileged children. Giant defender Per Metresacker, sometimes criticised for not tackling opponents aggressively enough, worked with disabled children when he did civilian service. More than half the team has immigrant roots. Of their four strikers, Lukas Podolski and Miroslav Klose are first generation Polish immigrants, Cacau is a Brazilian who holds a German passport and Mario Gomez has Spanish ancestry. Their midfield star, 21-year-old Mesut Ozil, who made Australian defenders look like high school boys, is of Turkish extraction, and even claims to read The Quran before each match.

The Germans are ‘efficient’ to the extent that you won’t see them score an own goal like Denmark. But this is an attribute born of diversity, not ‘engineering’, as the stereotype has it. In fact, some progressive British football writers even suggest that Germany’s winning the World Cup ahead of countries like England and Spain would be morally just because unlike the EPL, Germany’s Bundesliga is truly fan-oriented (they have a say in ticket prices), not consumed by greed and the country invests a lot of money in developing young footballers who play an attacking brand of the game. Uber alles nationalmannschaft?