The cricketing Pi has reached ashore 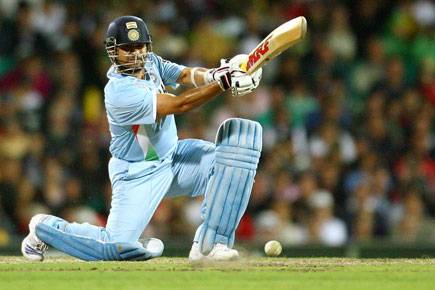 The cricketing Pi has reached ashore


The world did not end on December 21, but the retirement of Sachin Tendulkar is happening. It is for real. It was very well to say he must go. But now that he is going, starting with Sunday’s exit from one-day cricket, there is sadness. He was part of it so many years. His voyage was so long and challenging, like the Life of Pi. Sachin is Pi, almost infinite in the records he set. The 23 years he has been playing are the ocean, the critics and the controversies are the hyena. His body, sometimes a friend, at times enemy, is Richard Parker the tiger.

Sorrow apart, there are a couple of other things you feel. Personally, you feel old. For cricket, you feel confused. When Sunil Gavaskar and Kapil Dev retired, the one-day game was swaggering and the Test version wasn’t hobbling either. More crucially, India had not changed. It was still the simple old India where watching a cricket match was a big deal. People were not absorbed running their online lives, or playing their videogames while crossing a street. What is the future of cricket as we know it in this rapidly changing country? Who will be the new stars who can have the same impact and longevity as Tendulkar? These are questions that arise out of the worry. Maybe there won’t again be a star in Indian cricket as big as Tendulkar, just like there won’t be another Amitabh Bachchan. For that to happen the successors to Tendulkar or Bachchan will need to have an improbable level of talent, dedication and luck, not to mention certain societal circumstances.

Tendulkar announced his decision without fuss on Sunday, through an 80-word press release. “I have decided to retire from the One Day format of the game.  I feel blessed to have fulfilled the dream of being part of a World Cup wining (sic) Indian team. The preparatory process to defend the World Cup in 2015 should begin early and in right earnest.  I would like to wish the team all the very best for the future.  I am eternally grateful to all my well wishers for their unconditional support and love over the years.” Eighty words closed a career that lasted 463 ODIs, 18,426 runs and 49 centuries. And 154 wickets. Don’t forget those.

There are so many things you remember about Tendulkar’s one-day career. You remember, for example his strange wait for the first hundred. It came only in his 79th match. It is one of the ironies of his career. The format was tailor-made for him at that stage. Perhaps he has not waited 78 matches for any milestone.

But the first century was merely a statistical concern. He had proved well before it came that he was a matchwinner. Two of these performances were absolutely magical, among the most thrilling displays seen on any field of play, not just cricket. Hero Cup 1993. India vs South Africa in the semifinal at Eden Gardens. South Africa need six to win from the last over. Surely it will be bowled by Kapil Dev. Or Javagal Srinath. Each have two overs left in their quota. Neither bowls the last over. On air, Henry Blofeld and Sunil Gavaskar can’t quite figure out what is happening. Tendulkar, 20, having bowled exactly nil deliveries in the match, steps up. Helped by a South African run-out and some generosity from umpire Steve Bucknor, he concedes only three. Bengalis dance like Punjabis.

From Eden Gardens to Eden Park a few months on. India vs New Zealand in Auckland in March 1994.  Regular opener Navjot Singh Sidhu is injured. Again, Tendulkar puts his hand up. It is Holi day in India and Tendulkar paints the ground in Indian colours with a methodical destruction of the opposition. 82 runs in 49 balls. It was a seminal performance, doubtless a factor in Tendulkar becoming the most formidable one-day opener in the world. He would later partner Sourav Ganguly and the two would go on to become the world’s best opening pair.

Tendulkar’s steak of a bat fed the team (and the economy of Indian cricket) for years. Though Test cricket has greater value, some of the defining images and moments of Tendulkar’s career came in ODIs. There was the single to the onside for the 100th hundred in Dhaka and the curious celebration afterwards, the little word with the bat as if to say, ‘You really made me work for it’. There was the single in Gwalior against South Africa in 2010, this one to the off side, to become the first to score a double century in ODIs. There were the twin hundreds against Australia in Sharjah, around his 25th birthday. For many they remain the most vivid Tendulkar moment, the most audacious exhibition of his ability.

It was also One-day cricket, now wrinkled and unwanted One-day cricket, which made Tendulkar want to become a cricketer. Watching India win the 1983 World Cup inspired him. Narrowly missing out on his dream in the suspicious tournament of 1996 and then in 2003 broke his heart. Last year, at last, India won the tournament. The team carried Tendulkar on its shoulders during the victory lap. The cricketing Pi had reached ashore.